Is it ethically justifiable for a dentist to refuse to treat a patient who demands a treatment for aesthetics reasons that is not in his/her best interests?

Dental professionals ‘s main duty is to promote patient’s welfare and provide health care based on patient’s needs and preference (Lantos et al., 2011). However, patient’s might demand treatment that their dentist thinks it is not in their best interests. In such cases, an ethical dilemma arises from the variations in the patient’s wishes, or conflicts with the dentist’s integrity.

Don't use plagiarized sources. Get your custom essay on
“ Dental Professionals ”
Get custom paper
NEW! smart matching with writer

This could force the dentist to decide how his integrity places limits on the care he will provide. The context we focus on in this essay is potentially where there is a conflict between the dentist’s integrity and how his autonomy conflicts with the patient’s autonomy, taking into consideration patient’s beneficence and the dentist’s obligations of serving good.

For centuries, patient’s right to act, think and judge intentionally and independently without external constraints or coercion by others had been neglected by the power of the paternalistic approach (Kilbride et al.

, 2018). The paternalistic framework, which considered the duty of the physician to decide what was best for the patient while overriding or ignoring some of the patient’s vital interests, violates the patient’s autonomy (Pellegrino, 1994). The decades since the 1950s, have seen a remarkable reduction of the paternalistic approach in favour of respect for patient autonomy (Kilbride et all., 2018). Since then, the moral principle of autonomy has become the dominant principle in shaping the physicians-patients relationship.

Patient’s have the right to demand aesthetics treatment which they believe is in their best interests even if the patient’s request is not the one that the dentist believes would promote the patient’s well-being (Kelleher et al., 2012). Patient’s preferences are heavily influenced by their own sets of values and agendas, which they believe is best for them (Tong and Robert, 2007). A patient’s preference of having an extraction of ten teeth for a denture construction rather than having multiple restorations for example, might be the best solution from the patient’s point of view. This signals some underlying reasons for their preferences that their physicians must take into considerations (Tong and Robert, 2007). Some patients have strong responsibility towards their family members, therefore they tend to sacrifice their own welfare for a financial reason (Tong and Robert, 2007). Others might want to end the anticipation of further dental problems for their remaining teeth (Rule and Veatch, 2004). The fear of having multiple dental treatments might be another reason as they had gone through bad dental experiences before (Tong and Robert, 2007).

Based on the priorities in life, patient’s definition of dental good (what serves him/her good dentally) and overall good (what serves him/her good in life) varies from other patient’s definitions (Rule and Veatch, 2004). Knowing the priorities in life, patients know how to maximize their own welfare better than anyone else (Rule and Veatch, 2004). The extraction of ten teeth in the same example above, may count as a dental good for the patient, which may get the dental problems resolved in what seems to her/him as a final way. Other patients may have other non-dental reasons as mentioned above, which might lead the patient to sacrifice her/his dental good to maximize her overall good (Rule and Veatch, 2004).

Although the dentists are obliged to put the patient’s interest first according to the GDC standards of conduct (2013), however this cannot violate the dentist’s autonomy. Dentists as a human being have the same claim as the patients to respect for their rights (Pellegrino, 1994). Their rights to practice their autonomy in making personal choices and to follow their conscience to determine what is good dentally (Pellegrino, 1994). Dentist’s autonomy may be considered under 2 headings: (1) physicians’ autonomy as a person, and (2) physicians’ autonomy as a physician (ibid). The autonomy of the dentist as a person refers to the rights of making rational judgments and expressing his preferences with all respect to the values (ibid). In many cases, it is argued that the dentist should not impose his values and beliefs when it comes to the clinical decision. However, patient’s autonomy cannot require the dentist to sacrifice his rights in moral integrity and ignore his beliefs even when the patient believes that the demanded treatments might serve her/ him good (Pellegrino, 1994).

The autonomy of the dentist as a physician refers to his capacity of using his knowledge and obligation wisely (Pellegrino, 1994). Dentists are the gate through, which harm and benefit of any treatments will flow. Their responsibility of putting patient’s interests first, and their power of knowledge cannot be placed in decisions they believe will harm the patients, even if it is demanded by the patients themselves (Pellegrino,1994). Such demands violate the integrity of the dentist and his rights of practicing his autonomy. However, the obligations involving benefits and harms are debatable and the dentist will be in a position of balancing the two principles. One of the most widely code that is used in health care ethics is the slogan primum non nocere (first of all, do no harm) can be given a special priority especially in the scenario we mentioned (Rule and Veatch, 2004). The code gives special priority of avoiding harm over doing good (Rule and Veatch, 2004). However, no absolute priority can be given to one principle over the other, and the process of deciding to accept or refuse any treatments requires methods of balancing benefits against harms (Rule and Veatch, 2004).

To conclude, patients have different values and priorities in life when they demand aesthetics treatments that their dentist think it is not in their best interests. A conflict arises from the variations of what the patient demands, and the dentist’s integrity. Therefore, the dentist’s decision of accepting or refusing the requested treatments must be guided by a balance between the rights of practicing the autonomy and his obligations of serving good and doing no harm for the patients. The balancing must be mutually re-enforcing if (1) the treatments will serve good to the patient for a long term, (2) the dentist’s ability to serve that good is not compromised and (3) both the patient and the dentist’ moral claim to autonomy is to be respected. 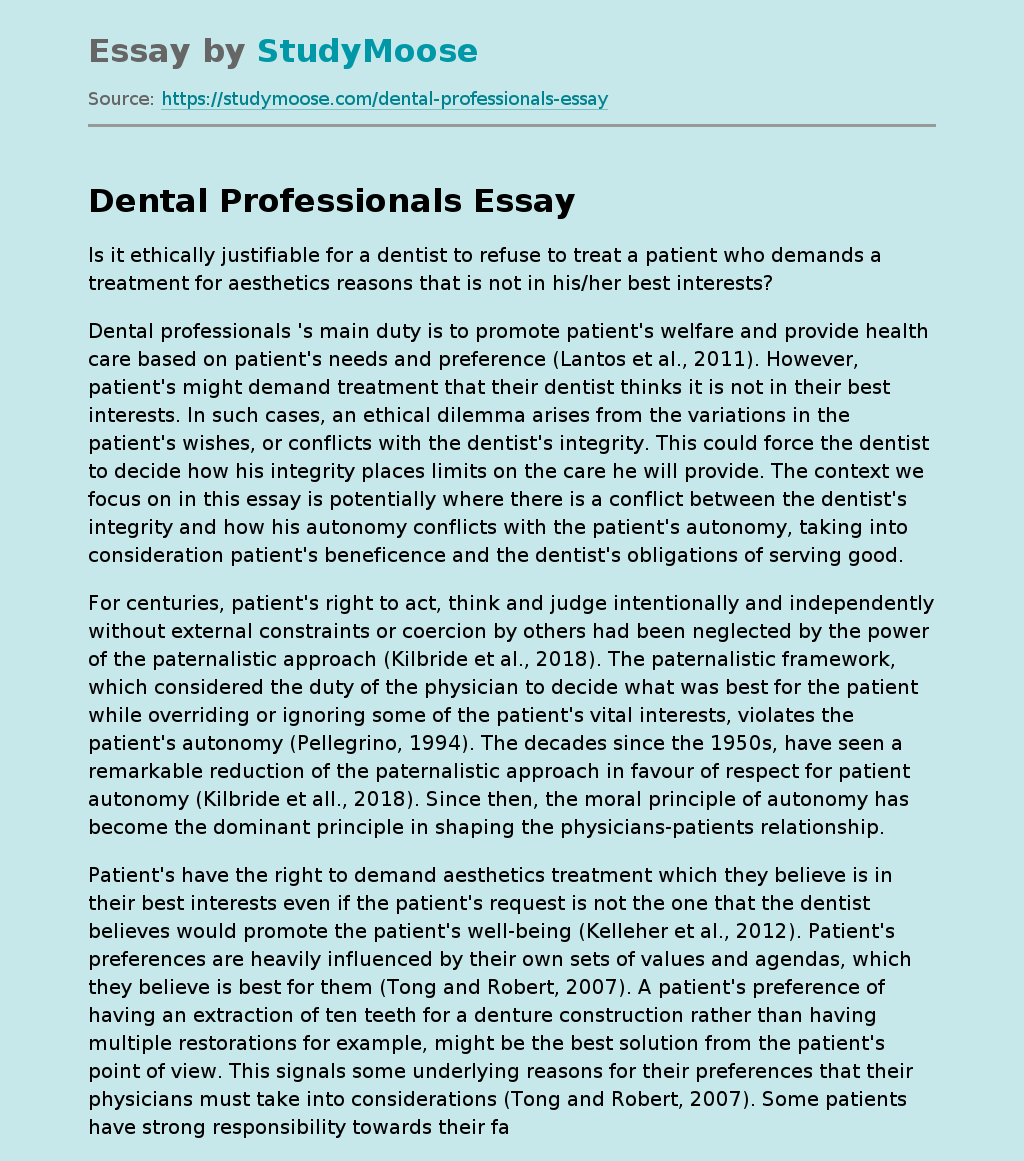