Although Sabah and Sarawak gained their independence on 31 August 1963, Hari Kemerdekaan is a significant date throughout Malaysia. On this day, Malaysians from all backgrounds, race and religion celebrate together in a harmonious way.

Don't use plagiarized sources. Get your custom essay on
“ Day of Independence ”
Get custom paper
NEW! smart matching with writer

Traditionally, a grand and colourful parade is held at the Merdeka Square in Kuala Lumpur, where people can attend and celebrate. Various government agencies and private sectors join together to participate in the parade. They will march in front of the Yang Di-Pertuan Agong (the King), ministers, special guests and a sea of spectators. Similarly, other parades are also held in different states.

This theme is in conjunction with the concept of 1Malaysia, touted by the Prime Minister, Dato’ Seri Najib Tun Razak. All Malaysians are urged to embrace the concept of transformation which brings about a meaningful process of innovation that can benefit the people. It will also help continue the process of producing a vibrant young generation.

This year’s celebration will mark the 54th anniversary of Malaysian independence. During the Merdeka month, the Malaysians will also show their patriotism towards the country by raising the Malaysian flag wherever possible – along the streets, houses, office premises and also vehicles.

A Brief History of Malaya Independence

The effort for independence was spearheaded by Tunku Abdul Rahman Putra Al-Haj, the first Prime Minister of Malaysia. He led a delegation of ministers and political leaders of Malaya in negotiations with the British officials in London for independence, along with the first president of the Malayan Chinese Association (MCA), Tun Tan Cheng Lock and fifth President of Malaysian Indian Congress (MIC), Tun V.T. Sambanthan.

Once it became increasingly clear that the Communist threat posed during the Malayan Emergency was petering out, agreement was reached on 8 February 1956, for Malaya to gain independence from the British Empire. However, for a number of logistical and administrative reasons, it was decided that the official proclamation of independence would only be made the following year. Tunku arrived home from London with the good news that independence would finally come to Malaya.

Between the years 1955-57, the Tunku and his cabinet prepared the Malayan Constitution, discussed the administration of justice, cemented racial harmony in the country and resolved to beat the Communists. Finally, Tunku Abdul Rahman led the nation when he shouted “Merdeka” seven times at the newly-built Merdeka Stadium on 31 August 1957.

The Formation of Malaysia

The Federation of Malaysia, comprising the States of Malaya, Sabah, Sarawak and Singapore was to be officially declared on 31 August 1963, on the 6th anniversary of Malayan independence. However, it was postponed to 16 September 1963. Tunku Abdul Rahman was declared “Bapa Malaysia” or the “Father of Malaysia”. The national flag was raised for the first time in all 13 states and two federal territories of the new nation on 16 September 1963.

In Kota Kinabalu, then still Jesselton, Tun Fuad Stephens read the Proclamation of Independence of Sabah through Malaysia. He was to be Sabah’s first Chief Minister, and later he became Sabah’s third Yang di-Pertua Negri, or Head of State. However on 9 August 1965, Singapore officially announced its separation from Malaysia. Currently, Malaysia consists of 13 states (11 Peninsular states and two from East Malaysia) and three Federal Territories. 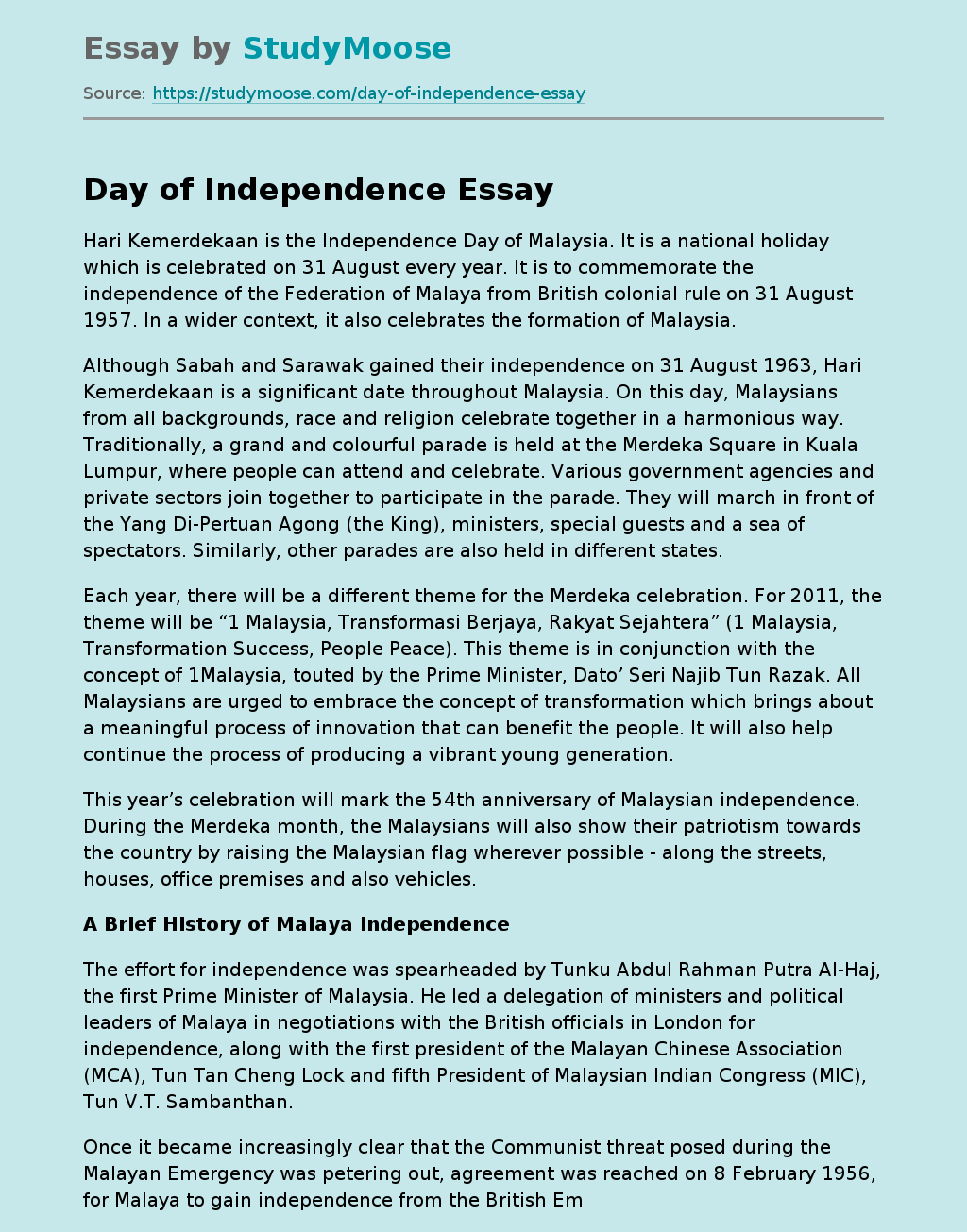