During the late middle ages (1000-1500) because of crowding and poor sanitation in the monasteries nurses went into the community. During this era hospitals were built and the number of medical schools increase. Between 1500 and 1860 (A.D.) politics, the Renaissance all affected nursing. As nursing was not valued as an intellectual endeavour it lost much of its economic support and social status at the start of the Renaissance. The deterioration of Catholicism which had supported the monasteries, hospitals, and nursing was led to the climax of its decay by the Protestant Reformation.

A widespread movement of suppression of monasteries occurred similar to that in England which was brought about by Henry (VIII) who had used the advantage of Protestantism to free himself from Papal authority. The King used his revolt of the church based on the Roman Catholic Church refusal to sanction his divorce. He destroyed over 600 monasteries during his Protestants revolt. The immediate result of the monastic dissolution was the hospitals and inns were suddenly snatched away from a public dependent upon them for many centuries.

Which caused the poor to be without any principle organized system of relief. An additional effect of the Reformation was the complete withdrawal of medicine from the monastery to the University. Thus medicine found a refuge that was denied to nursing. Medical advancement had been assured while the techniques of nursing remained unchanged in the guardianship of brothers, and nuns who continued practising nursing. The Protestants viewed the woman’s place as being in the home raising children.

Industrial class women took in work or went out to work. As nursing was not considered acceptable even to the industrial classes nurses were usually immoral, drunken, illiterate, and/or prostitutes. Nurses were considered to be the lowest level of human society. A decline in the quality of public service for the sick was noticeable towards the end of the middle ages. It took about 200 years for the public to recognize the need to pay for quality nursing care to restart vocational desirability. The public first had to separate nursing from domestic service in which it had become deeply entangled. Mismanagement, inadequacy, suffering and deliberate exploitation made things worse. Civil appointees who were men undertook leadership and withheld authority from women – who
then lost control over nursing. Matrons were put in charge of secular riff raff who were taken on as nurses. The word “Sister” was retained to please the public for amongst the rich and poor it had come to be associated with the sympathy and encouragement of the monastic nuns. The latter half of the period between 1500 to 1860 A.D. saw nursing conditions at their worst and has been called the dark period of nursing. New hospitals had been built but quickly became places of horror as unsanitary conditions caused them to be a source of epidemics and disease. Furthermore a taxation upon windows caused windows to be bricked up in places of the poor and hospitals thus removing natural lighting and fresh air thus creating further a situation which bred disease and epidemics. Seldom were opposite sexes and different disease separated. Often hospital beds were shared. Nurses when off duty slept within hearing range of their patients and were still on call. Crowding of wards often made them impossible to clean.

Because of the high demands placed upon nursing staff nursing procedures which were limited and simple became even more limited and simple. Cleansing of patients was no longer attempted. Only the usual nursing treatments such as bleeding and purging were ordered. Because of the hard work, long hours, poor pay, and poor food respectable women were not expected to do nursing. The majority of the work consisted of housework, scrubbing and laundry which had hours which varied between 12 to sometimes 48 hours. Character nor training was a consideration in nursing. In 1545 the council of Trent decreed that every community of women should live in strict enclosure. It took over 200 years of resistance for women to overcome this decree. The nursing sisters of France made little or no resistance such that their professional standards deteriorated. During the Renaissance (1500-1850 A.D.) the interests in the arts and sciences increased such that there were many developments in the technologies for and care of the sick. Transition from health care by religious orders where nursing was practised were replaced by hospitals where conditions were dependent upon the economic support of the people requiring care. Even though there were significant advancements in science because nursing was still seen as something that should only be done by those who could not find another way in which to make money the nursing profession did not advance. The dark ages of nursing lasted for three centuries until the mid 2800’s when Florence Nightingale brought about a change. Even though the advancement of medicine did not affect nursing during the Renaissance – in the late 1500’s several groups began nursing during the Renaissance – in the late 1500’s several groups began nursing and tending the sick, poor, and dying. Amongst these groups were St. Francis de Sales, the Order of the Visitation of Mary, St. Vincent DePaul, the Sisters of Charity, Dames de Charite’, Louise le Gras, Brothers Hospitallers of St. John, Albuquerque, Order of St. Augustine, St. Camillas De Lellis, Jeanne Biscot, and the Nursing Sisters of St. Joseph de La Fleche. Many of these people came from rich and influential families. Thus setting the trend for their peers to become involved in charitable nursing and institutions of nursing. When such institutions of charitable nursing were shown to do well the ruling classes and churches would begin supporting these economically. The views of the well to do upon the nursing care of the sick, mentally ill, elderly, dying and indigent had a strong influence upon the presence and quality or lack of nursing care available during the Medieval Times through the Renaissance. 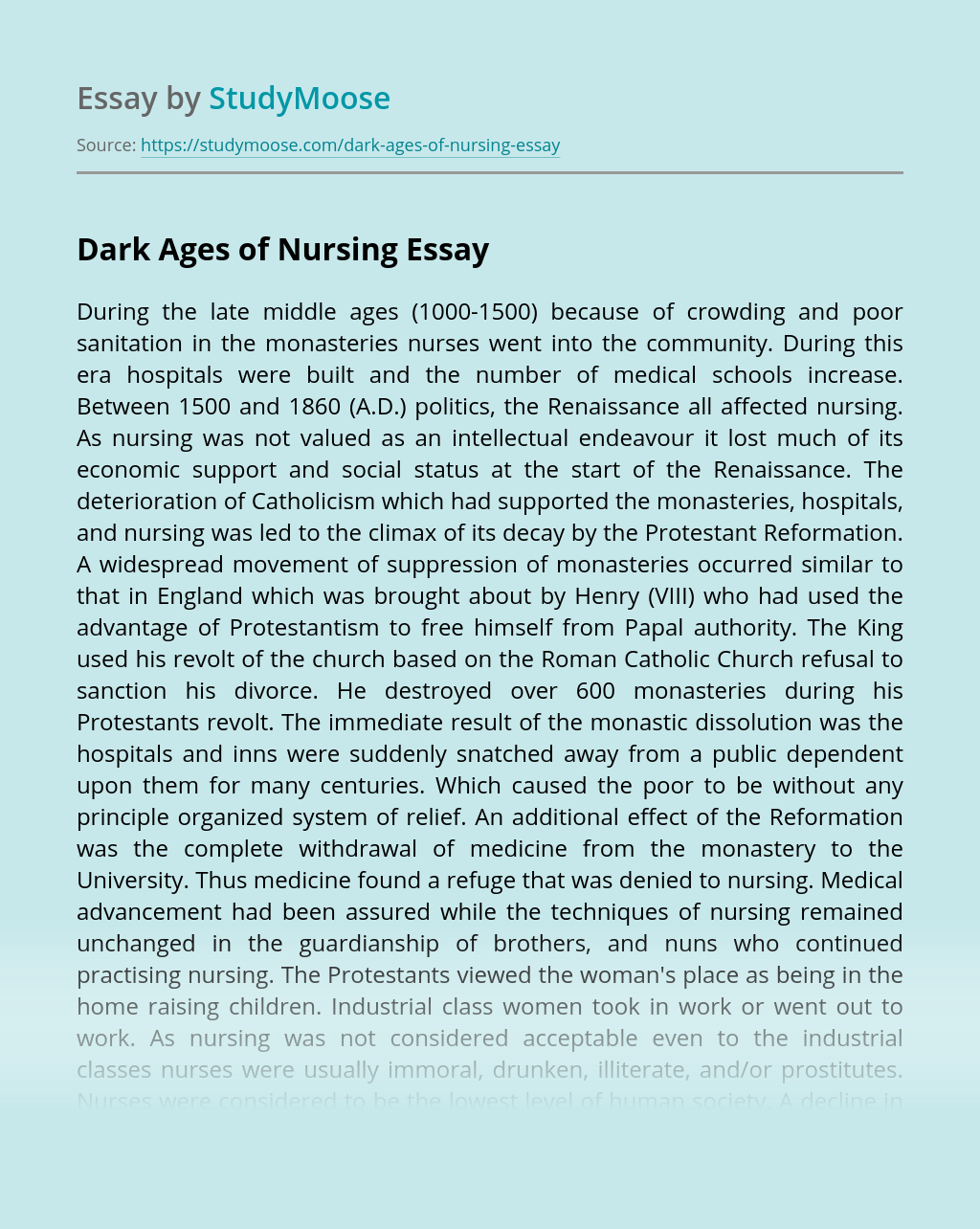