Cyberbullying as a Social Issue

There are varius social issues that need to be highlighted today, but cyberbullying has in one way or the other impacted on everybody. Bullying is categorized as hostile behavior where a prevailing group abuses its authority by threatening a less central group (Maher, 2008). Bullying is a by-product of the capitalist society that advocates for personal advancement over any other goals. From a tender age, children are encouraged to be the best they can be. Instincts push people to achieve these results at any cost.

Turn in your highest-quality paper
Get a qualified writer to help you with
“ Cyberbullying as a Social Issue ”
Get high-quality paper
NEW! AI matching with writers

The overriding instinct in most instances is personal survival and the need to dominate others. If an person does not have the right values, they devise ways to intimidate others out of the competition. In the past incidents of bullying were limited to the relatively few cases of face-to-face bullying. All this has changed in the information age. Proliferation of communication devices combined with the internet provides fertile ground for bullying. One reason that could explain the rise in Cyberbullying is the anonymity that the internet affords.

People know that they do not have to account for their actions online and therefore tend to be more belligerent than usual. In the past the threat of physical confrontation in bullying was always present, however, the internet has largely diminished that threat.

Previously, I thought that only on field bullying existing. However as we went deeper in the course I realized that there exists different types of bullying. I also came to learn that cyberbullying takes more than one form.

Cyberbullying refers to a range of activities done online that are harmful to the well-being of the victim (NoBullying.com). These may take the form of flaming where an argument between two people quickly spreads to include more people each taking one side of the argument and hurling insults to people on the other side. Another form is harassment, where a bully humiliates the victim by sending hurtful images, text messages, or emails about the victim. This type of bullying has grown with the recent trend of making memes. Memes are images containing a message meant to ridicule the victim. Denigration is another form of Cyberbullying; the bully attacks and tarnishes the victims through spreading false information about them.

Impersonation is another form of Cyberbullying. The bully assumes the identity of another person with malicious intent. Closely related to this is outing where someone gains personal information about the victim using dishonest means such as impersonation. The bully then publicizes that information with the aim of humiliating the victim. We also have stalking which involves following the victim online in an unjustified way. As illustrated, Cyberbullying involves a myriad of activities taking place in the online space. These activities involve both passive and active participation by victims and bullies (InDirect)

Online bullying may happen for several reasons. First, bullying by popular kids happens because they want to maintain their popularity (Donegan, 2012). Such people use bullying to validate their popularity. Often, this requires the support of backers and henchmen who remain on the sidelines cheering actively and passively as the bully brings down the victim. This kind of bullying is likely to target famous people since attacking them provides the bully with potential for attracting more attention. In addition to popularity, hurting others makes such people feel powerful. The more people they bully the more powerful they become. Taking on famous figures boosts the power of such bullies to even greater heights (NoBullying.com).

The other group of online bullies is people who are less socially successful. This group forms the bulk of cyber bullies. They find solace in bullying as it helps them cope with their low self-esteem. Their objective is to fit in with their peers and bullying provides a chance to help them achieve this goal (InDirect). Cyberbullying requires even less courage than traditional forms of bullying. The internet with its anonymity helps people show their true colours. Cyber bullies might not be bullies in real life but since the internet provides them with anonymity, they take advantage of that to bully others (Donegan 2012).

Effects of CyberbullyingStudies have shown that bullying causes emotional damage to its victims though most of these victims find it difficult to admit it. In a study involving over 3000 students, researchers learnt that out of all bullying victims, 38% felt vengeful, 37% were angry, while 24% felt helpless. Another study conducted by the Cyberbullying Research Centre using a sample size of 468 students drew almost similar conclusions. They found that out of all the female victims 39% felt frustrated, 36% felt angry and 25% felt sad about it, the males figures were 27%, 36% and 17% for each of those respective categories. Females seem to show high susceptibility to bullying than males. However, this is hardly surprising since males tend to admit emotional weakness less readily than their female counterparts do (Hinduja & Patchin, 2009).

Sociologist Robert Agnew developed the Great Strain Theory, which hypothesizes that victims of bullying can develop problematic emotions, which cause deviant behaviour. The victim goes through a vicious cycle and this can result to the victim developing antisocial behaviour as they try to process their emotions and find an outlet for their anger and frustration (Hinduja and Patchin, 2009).

Bullying also takes a toll on the bully. According to the Office of Juvenile Justice and Delinquency Prevention report, over 60% of males with bullying tendencies between grade six and nine were later convicted of at least one crime in their adult life. This is in comparison to 23% of people who did not bully. Forty per cent of these former bullies got at least three conviction by the time they were age 24 years; this is in comparison to 10% of those who were not bullies (Donegan, 2012). When bullies use bullying as a coping mechanism it leads to development of a vicious cycle for both the victim and the bully (Oleus, 2001). Evidently, bullying has a heavy toll on the society, the effects of this habit are long lasting, and some individuals feel the repercussions throughout their life.

Solutions to Cyberbullying will come from solving the general problem of bullying since Cyberbullying is only a subset of the wider problem of bullying. Wiseman reports a study conducted in Nevada that identified six essential elements in dealing with bullying in schools; availability of a reporting procedure, integration in the curriculum, student-centred approach with students taking the initiative of stopping the practice, prevention rather than punishment, effective punishment to deter the practice, and keeping up with technology. A solution to bullying must incorporate all stakeholders involved in growth of a child starting with parents and teachers (Wiseman, 2011).

Capitalism subconsciously fosters bullying by placing pressure on individuals to succeed. However, this is not a reason to tolerate this vice. Competition is only good if it is fair and productive. The rise in bullying should be viewed in the context of moral decay of the society. Advances in information technology and emergence of social media have led to the evolution of bullying with new forms of bullying occurring in this new space. The toll of bullying in society is huge and steps must be taken to address this menace through legal and social means.

Cyberbullying as a Social Issue. (2015, Nov 10). Retrieved from http://studymoose.com/cyberbullying-as-a-social-issue-essay 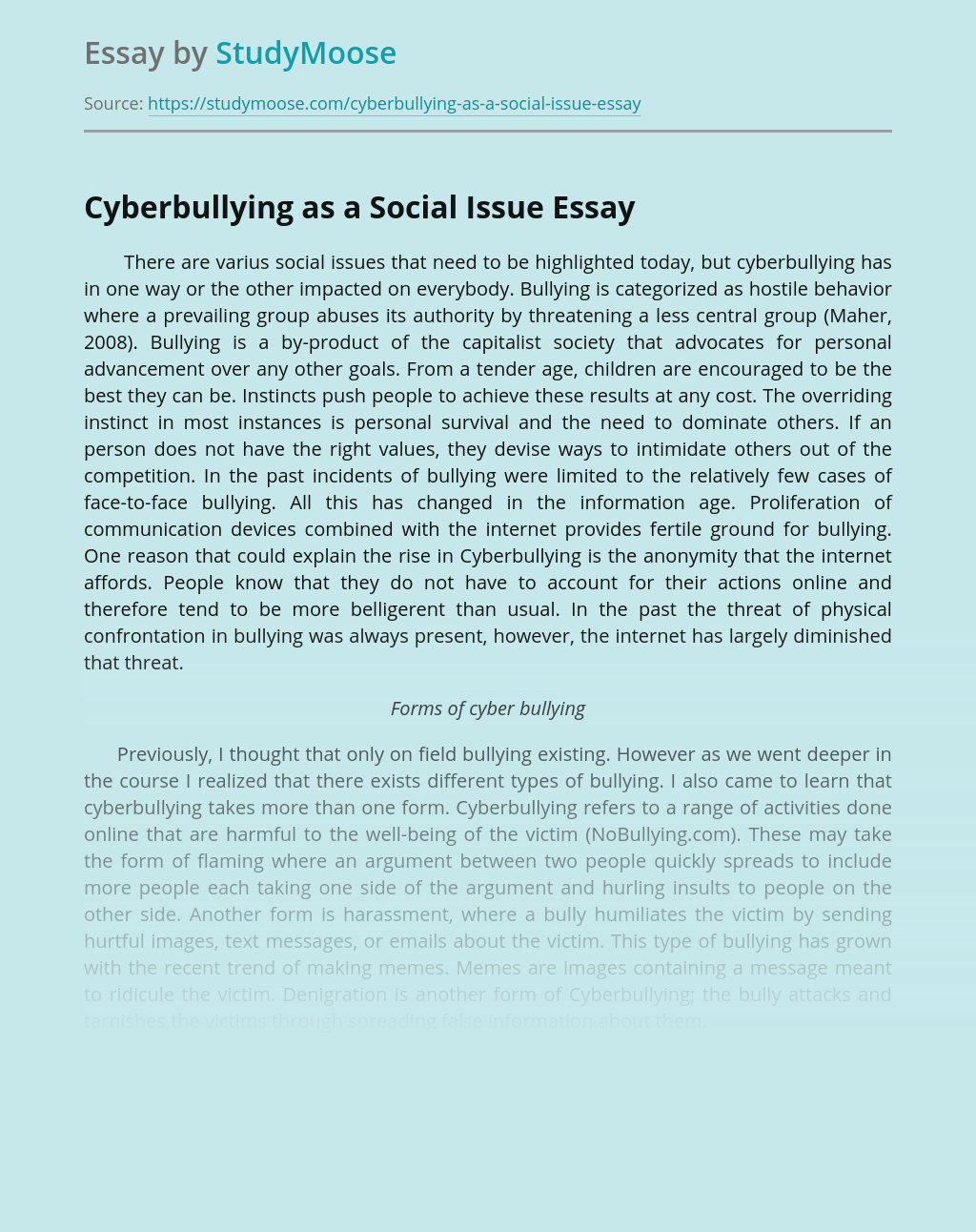 Turn in your highest-quality paper
Get a qualified writer to help you with
“ Cyberbullying as a Social Issue ”
Get high-quality paper
Helping students since 2015
Stay Safe, Stay Original