Cyberbullying is a recent form of aggression that students use to humiliate and attack their less popular peers. Like traditional bullying, this behavior is based on the imbalance of power between bullies and victims and may continue for a long time. Cyberbullying manifests itself in posting and sharing abusive comments, photos, and videos, writing intimidating e-mails and messages, spreading rumors, etc. (V?llink, Dehue, & Guckin, 2015). Unlike face-to-face school bullying, this type of aggression may occur at any time and in any place, so the victim cannot escape it.

Don't use plagiarized sources. Get your custom essay on
“ cyberbullying argument essay ”
Get custom paper
NEW! smart matching with writer

It is also more difficult to prevent bullying and punish abusers because they often remain anonymous. Cyberbullying has a detrimental effect on victims’ emotional and psychological health, so effective solutions to this phenomenon should be introduced to protect children.

During the past decade, researchers paid increased attention to the phenomenon of cyberbullying, focusing specifically on its adverse effects on victims’ health and well-being. Findings from multiple studies have demonstrated that children subject to systematic online abuse have increased risks for experiencing depression and somatic symptoms, as well as feeling lonely and vulnerable (Nixon, 2014).

These people may also have social and communication problems that persist into adulthood, and they do not feel safe at school even if no one abuses them face-to-face. Interestingly, research suggests that both victims and bullies suffer from cyberbullying, with latter being more subject to unexplained aggression and delinquent behaviors (Nixon, 2014). It means that efforts at eliminating cyberbullying and supporting children should be directed at both victims and perpetrators.

The problem of cyberbullying is extremely difficult to address. Unlike school bullying that occurs in real life and can be detected by teachers and peers, this aggressive behavior is more elusive and invisible (Minton, 2013). Students rarely report being abused on the Internet, mostly because they realize that their parents and teachers would not help them. The problem is that even when a student reports cyberbullying, it is practically impossible to identify its source and punish abusers. For now, schools lack comprehensive anti-bulling policies and cannot come up with actual strategies and tactics to tackle this growing problem. Parents also seem to lack understanding of how detrimental cyberbullying may be for their children’s health and do not know how to support them.

I strongly believe that effective solutions to cyberbullying need to be introduced. The most important thing that needs to be done is student education. Children need to understand how cyberbullying affects them and their peers and why this type of behavior is unacceptable. They also need to be encouraged to seek professional advice and support of psychologists when cyber bullying bothers them. Parents should also be educated to detect the slight changes in their children’s behavior and help them overcome their problems successfully. Both schools and parents need to make sure that children feel protected and cared for and not allow them to suffer silently. Only an integrated approach to cyberbullying involving teachers, parents, and students can bring positive, long-term effects.

Ultimately, the way schools and parents combat cyberbullying will determine students’ safety and emotional well-being. Cyberbullying is a negative social trend that affects the most vulnerable and weak children, leading to psychological and psychosomatic problems, depression, anxiety, etc. Because this phenomenon is difficult to detect and prevent, it is extremely important to involve all stakeholders including teachers, families, and students. I am convinced that a collaborative approach to dealing with cyberbullies can reduce aggressive behavior and make children feel more protected, both at home and at school. 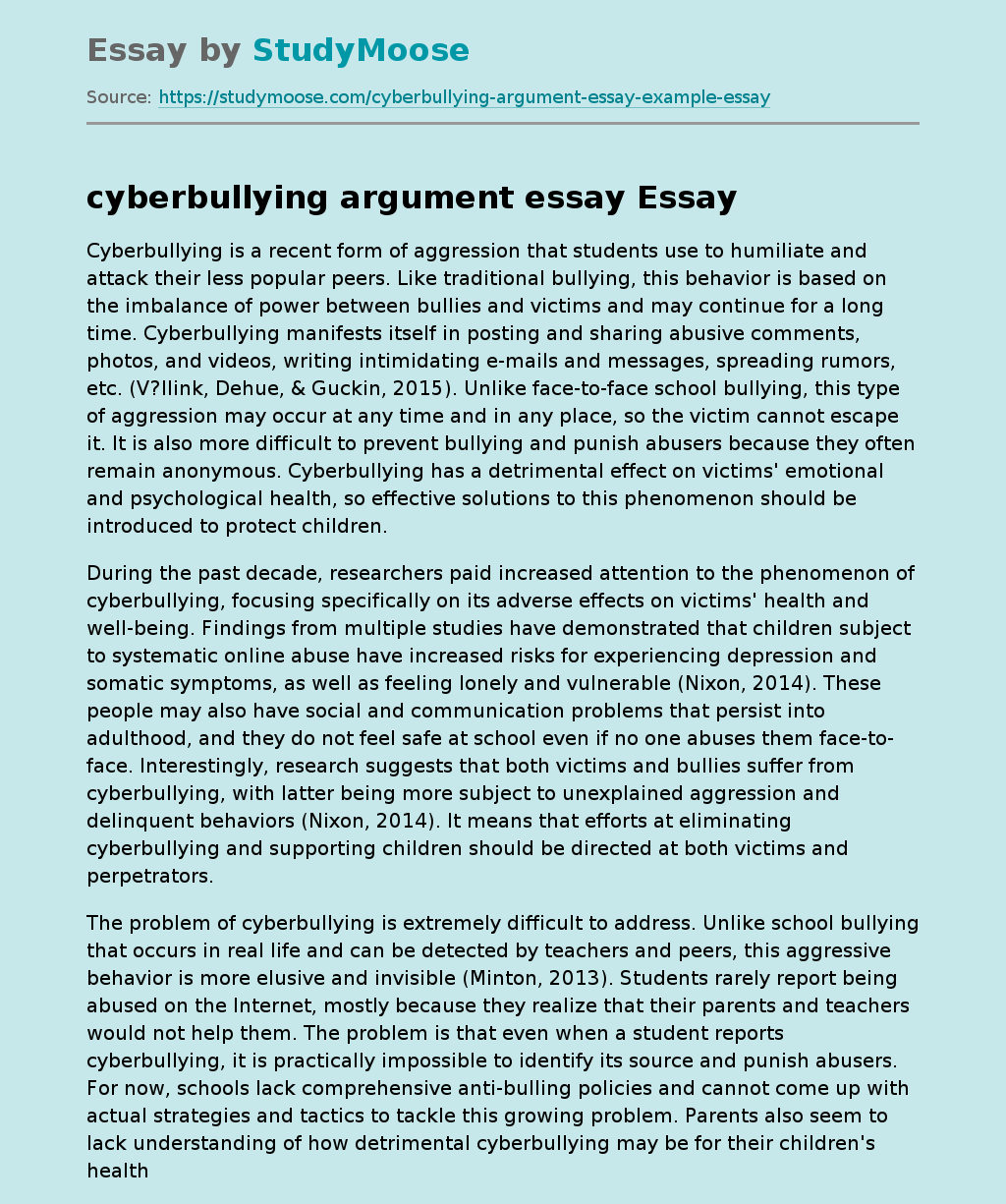