Technology in today’s world has become a double edged weapon where in the user has to very carefully and diligently carve out a balance between risks involved and the opportunity the technology can offer and needless to say, there is a very thin line demarcating the two. It has brought the world at a click away where in on a touch of a button we can access our families, co-workers, classmates, idols, mentors, neighbours, and even strangers. On one side, the Internet has made this whole such a smaller place that even the people with minimal resources can thrive and network bringing awareness to important socio-political movements and acting as a platform for crowd funding and different kind of fundraising for many noble causes and start ups and business ventures alike but on the other side, it is exposing the vulnerable strata of the society to the obnoxious deep dark world of deceit, black mail, bullying and crimes.

Don't use plagiarized sources. Get your custom essay on
“ Cyber Bullying Today ”
Get custom paper
NEW! smart matching with writer

This rapid rise of technology-based communication during the past few decades has dramatically changed the social interactions, especially among teenagers and the internet which few years back was nothing more than an “extra” in everyday communication to now having become the “primary” and it seems the only mode of communication.

This shift from face-to-face communication to online communication has destroyed the conventional form of relationships and has created many unique and potentially harmful dynamics for social relationships and cyber bulling is one such global menace which has spread its tentacles over to the big, wide world of technology making it more dangerous than before.

Cyberbullying, as it is known, can occur anytime and anywhere – via email, texts, phones and social media websites. If not checked in time, the effects can be devastating- one such dynamic has recently been explored in the literature as cyberbullying.

How serious is this menace

There is no such study carried out by the Government/State agencies to assess the issue of cyber bulling within the four walls of the school/ college and within the wall less cyber space to the limited knowledge and understanding of the author. A popular report by a US market research company in 2015 suggests that, at the time, there were more mobile devices on the planet than people -8.6 billion devices versus 7.3 billion people. And by the end of 2018, the number of mobile devices in world will exceed 12 billion – an average of nearly 2 devices per user.

Looking back at last few years with the kind of information that is available, the worst fears are coming true with this demon becoming scarier with each passing year. The world’s biggest name in cyber world, the Microsoft conducted a survey in 2012, spanning across 25 countries around the word and it reported India as the third country in the ranking in terms of the number of online cases reported

What is more worry some is that the aforesaid figures can be taken as a very conservative estimate as a large chunk of cases go unreported for various reasons.

The people who are bullied in person are the ones who are bullied on line. While the bullying in person that is off -line bullying may allow the person to avoid the areas/places and situations that will put the victims face to face with the bully but cyber bulling has no such get away. The cyber bullying will follow the victim wherever the victim goes, be it alone or in a crowd, 24 hours a day, 7 days a week, 365 days a year. The hurtful contents posted online are done so anonymously and hence, difficult to stop or trace. Given the way the social media works, the contents so posted is quick to go viral, and reaches a large audience in the blink of an eye, making it difficult, even impossible, for authorities to delete the harmful content before it wrecks damage.

With the aforesaid findings in hand, it is clear that dealing with cyberbullying in India is truly a challenge. All pervasive nature of cyber bullying, coupled with technology getting advanced with each passing day aggravated by lack of professionals in police and enforcement agencies who have either nil or very limited understanding of the cyber space, coupled with lack of an appropriate and suitable legal mechanism in place makes the growth of cyberbullying an alarming trend across the globe and India is no exception.

The kind of offences committed in the cyber space like bullying, stalking, terrorism, cheating, Criminal breach of trust are quite akin to similar offences in the real world and are punishable. The fact remains that Information Technology Act, 2000 (IT Act) was not exactly enacted to deal with crimes in cyber space rather it was meant to deal with e-commerce and electronic records, and also to punish e-commerce offences. Offences such as intimidation, insult, annoying, harassment, defamation, etc. in cyber space continued to be punishable only under the IPC till the 2008 amendment to the IT Act. Section 66 A was introduced by way of amendment to deal with such crimes. 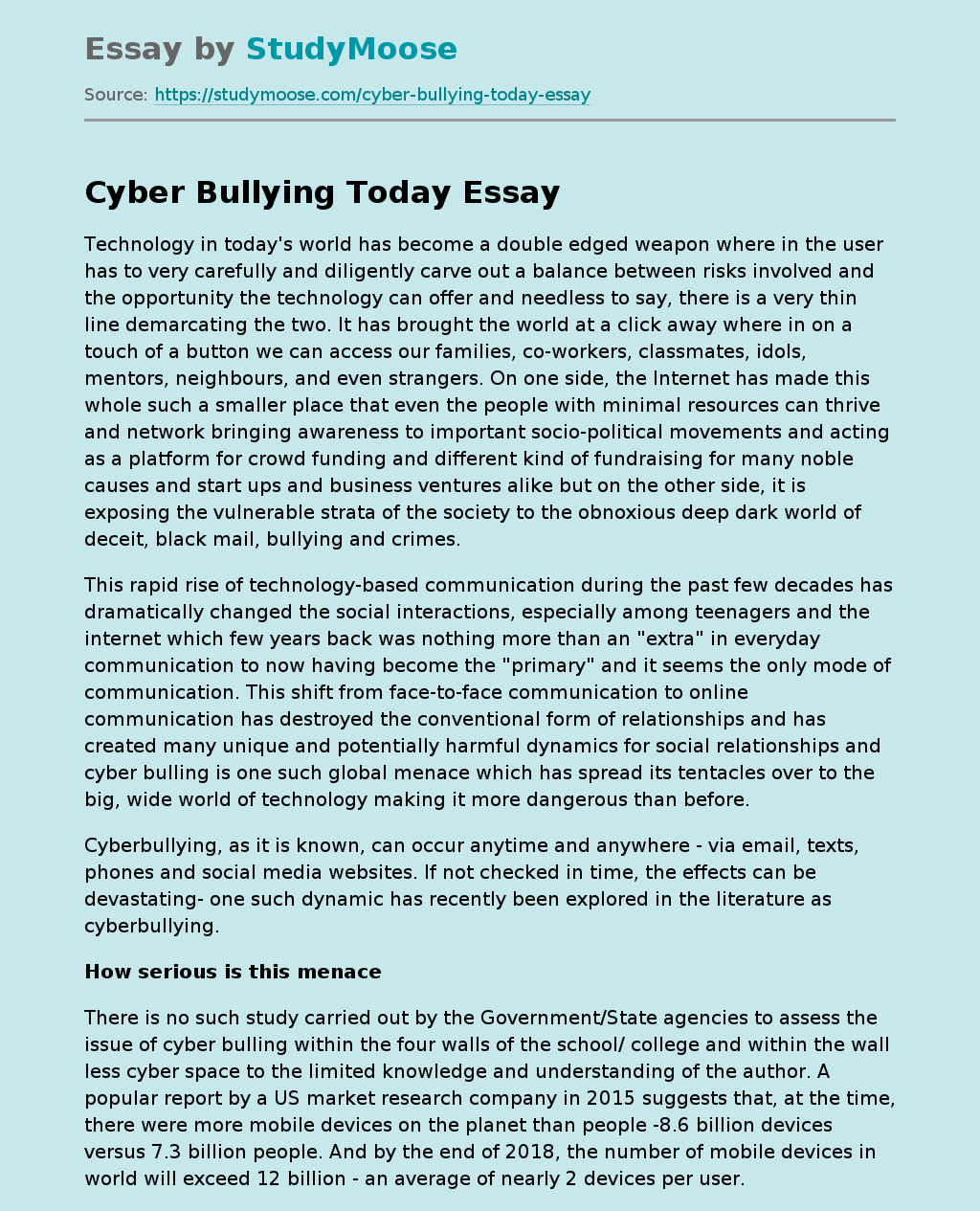