According to Ernest Hemingway, “All Modern American literature comes from one book by Mark Twain called Huckleberry Finn. ” Huckleberry Finn is about a boy that hates being civilized and following rules. In the book Huck ends up running away from his pap and finds another runaway named Jim, who happens to be a slave. He starts to wonder what is right; helping a slave escape which is wrong in society’s eyes or do what is morally right and help his friend.

Don't use plagiarized sources. Get your custom essay on
“ All Modern American Literature Comes From One Book by Mark Twain Called Huckleberry Finn ”
Get custom paper
NEW! smart matching with writer

As he progresses throughout the story he starts to understand good morals and friendship.

He finds out what a good person really is; whether they are black or white. Though there are a number of characters who portray evil and racism in the book, there are three; Widow Douglas, Jim, and Huck that really make a positive impact on the reader. The Widow Douglas isn’t a huge part of the story but she definitely has a huge impact on Huck and the decisions he makes.

In the beginning of the story the widow is Hucks primary guardian and helps him become civilized. The Widow tells him that he needs to pray every night and thank god for everything good that happens.

“At first I hated the school, but by and by I got so I could stand it” (15). The widow gets him into school and takes really good care of him. Although she isn’t in the book as much, Huck always thinks of her when he is trying to make good decisions.

The widow is one of the few positive influences on Huck. Mark Twain describes two kinds of parents in this story, one is pap who is abusive and a drunk that doesn’t care for Huck at all, and the other is the Widow Douglas who wants to make Huck a good person and help him. Jim is another character in the story everyone wants to like.

He is a loyal friend to Huck and all around a good person. In the 1800’s African Americans weren’t even considered to be people, they were treated horribly and no one paid attention to it. Once Mark Twain establishes that a slave can have feelings and be good it turns the whole book around and makes the reader think about what it was like back then. Jim doesn’t change a lot in the book but he helps Huck do so. He helps Huck realize what is really important in life and that everyone is equal. He helps Huck develop good morals.

There isn’t any other character that changes Hucks life as much as Jim does. The most important character is Huckleberry Finn. Huck is about thirteen years old in the book, he makes some really difficult decisions for being such a young kid. Huck hasn’t had the most normal childhood; his father is usually never there, and when he is, he is abusing Huck. He starts off as follower and does whatever Tom Sawyer wants him to do. At the beginning of the story his is very one dimensional and closed minded. At the end he has developed into a diverse and open minded character.

Mark Twain used Huck, and his age to show that everyone, no matter how old, can understand what is right. “All right, then, I’ll go to hell”(214). This is the climax of the story, its when Huck is thinking about telling miss Watson where Jim is so he can get rid of his “sin”. He realizes he doesn’t really care about what society thinks is right, so he rips up the letter rebelling against society’s rules. The Widow Douglas was the first good influence on Huck, then it was Jim, and now Huck is the good influence on everyone else.

Mark Twain showed that even though society or authority says something is wrong doesn’t mean it is. Ernest Hemingway was right; this book has set up the outline for all American literature. Its is widely regarded as one of the greatest masterpieces ever written. The book teaches a moral lesson and how one person can affect another person’s life, such as the widow to Huck, and Jim and Huck to each other. These three were the best morally throughout the whole story. “Dah you goes, de ole true Huck; de on’ly white genlman dat ever kep’ his promise to ole Jim”(89). 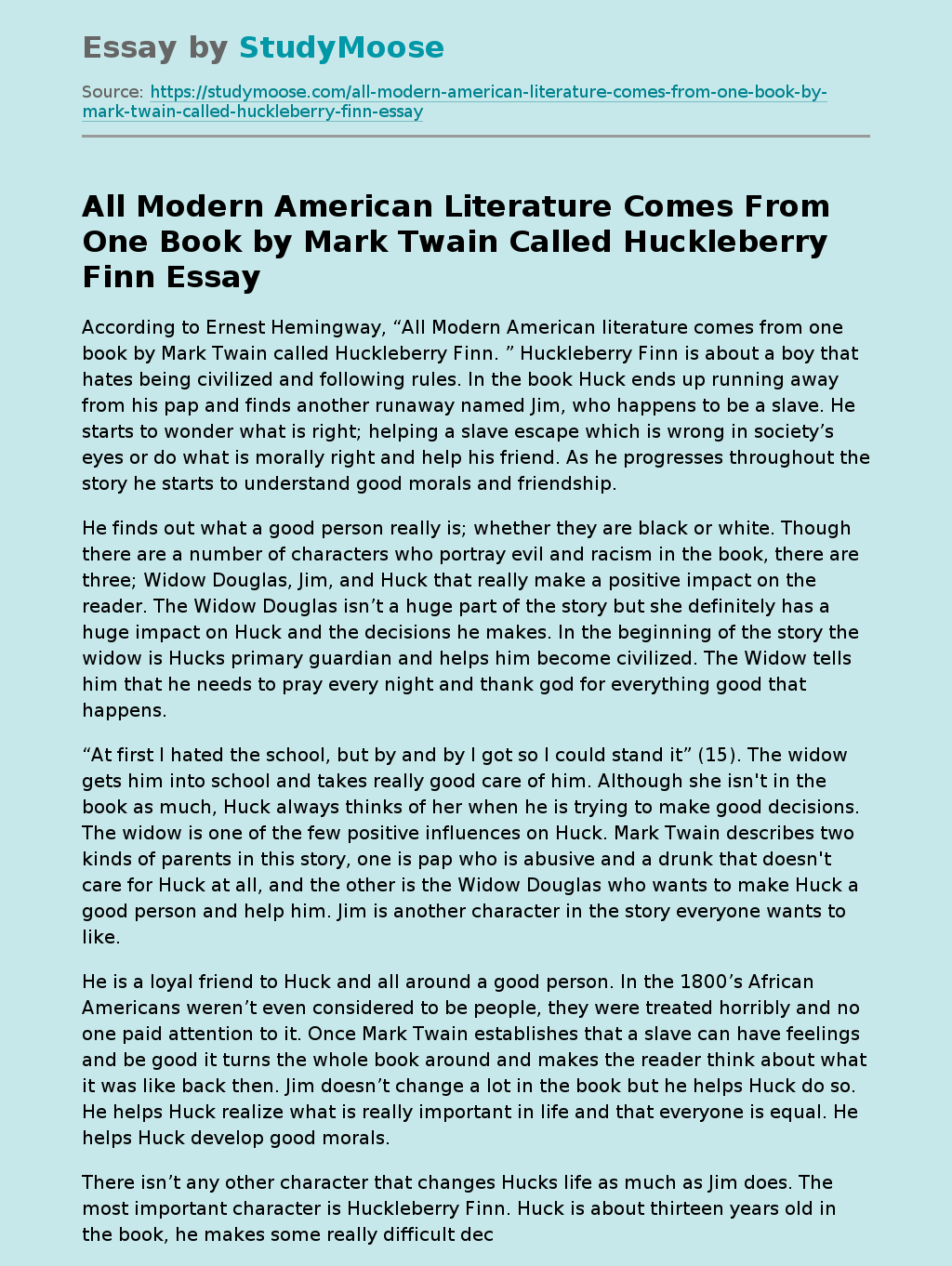