Cultural Considerations and the Mental Disorders

The Diagnostic and Statistical Manual of Mental Disorders (DSM) is the standard document for mental health professionals to use when diagnosing patients. However, the DSM has a few areas of weakness that lead to criticism of the manual. One of the major criticisms is the lack of cultural considerations when it comes to the diagnostic criteria. Another criticism was the lack of validity when formulating a diagnosis. There has been increasing conversations and research on the impact that culture has on behavioral, cognitive, and emotional development.

Don't use plagiarized sources. Get your custom essay on
“ Cultural Considerations and the Mental Disorders ”
Get custom paper
NEW! smart matching with writer

The DSM IV was the first attempt at addressing this issue by including a section on culture-related diagnostic issues. Therefore, clinicians need to approach psychiatric diagnosis through a multicultural lens to understand how mental disorder and culture are connected to effectively treat syndromes.

, 2013). My assumption is that being a part of two different cultural environments creates a conflict between the identities. While knowledge is important, mental health professionals must examine the interaction between ethnic identity and acculturation and how it influences symptom expression.

For example, African American women who experience depression tend to be more high functioning and might not meet criteria for depression. This can lead to high rates of misdiagnosis and under diagnosing mental health concerns in ethnic minorities (Chapman, Delapp & Williams, 2014). Within the culture of African Americans from childhood members of this group are conditioned to not seek help when struggling, but to work through the problem on their own. This belief stems from the distrust in societal structures due to the history of racism and discrimination faced by ethnic minorities (Chapman, Delapp, & Williams, 2014). Not perceiving social institutions as supportive or accepting contributes to the low rates of help-seeking behaviors (Chapman, Delapp, & Williams, 2014).

It was interesting to see the connection between societal factors, ethnic identity, and mental health. Additionally, the link between racism and poor mental health was intriguing. The topic of racial trauma has become more popular within the last few years. Symptoms of racial trauma are like those in post-traumatic stress disorder (PTSD). The similarities between culturally specific syndromes and current diagnosis in the DSM call for the integration of a multicultural approach in identification and treatment of disorders. Clinicians should work to assess the culturally specific explanations for distress when working with ethnic minorities. As clinicians, we should aim to understand how cultural experiences influences the etiology and treatment implications, in order to provide culturally competent services.

Glossary of Culturally Specific Syndromes in the DSM

When the Rosenhan (1973) study was published it caused some turmoil within the American Psychiatric Association (APA). This study showed that mental health professionals were not able to accurately diagnosis psychosis (Rosenhan, 1973). These findings prompted the APA to move from narrative descriptions to a polycentric criterion. Although, this change increased reliability of diagnosis, validity was sacrificed. A factor that could be an explanation for low validity is the lack of cultural considerations when formulating a diagnosis. Therefore, when the DSM IV was being drafted the APA created a cultural responsiveness taskforce to incorporate these variables into the DSM (Blashfield, Flanagan, & Raley, 2010). Out of this work group a section on culturally relevant information was added, this included a glossary of culture-bound syndromes, and an outline for a cultural formulation interview (Blashfield, Flanagan, & Raley, 2010).

The Eurocentric viewpoint of the DSM did not account for the differences in symptom presentation among diverse cultural groups. Take for example, susto which is an illness primarily seen in Latin and Native American cultures, that is a result of an extremely traumatic event (American Psychiatric Association, 2013). Symptoms of susto mimic those of PTSD, such as reliving the experience, insomnia, and depression (Chapman, Delapp, & Williams, 2014). Although, there are similarities there are a few distinct differences such as feeling dissociated from one’s body (Chapman, Delapp, & Williams, 2014). Considering the location of the culture-bound syndromes in the DSM it can be interpreted that these disorders are separate from the other diagnoses. Instead of thinking of the cultural bound syndromes as separate they should be evaluated as cultural variations of the disorders listed in the main sections of the DSM. Additionally, Chapman and colleagues (2014), stressed the importance of mental health professionals being culturally competent practitioners. This means thinking about the potential cultural factors at play when assessing and diagnosing clients (Chapman, Delapp, & Williams, 2014). Although, the latest DSM has better incorporated cultural considerations, there is room for improvement.

Another implication is the clinician’s awareness of their biases when it comes to working with ethnic groups. Although, many training programs require classes related to multiculturalism there is a need for more practical skill application (Chapman, Delapp, & Williams, 2014: Green, Callands, Radcliffe, Luebbe, & Klonoff, 2009). As a result, mental health professionals may rely on a color-blind approach which disregards unique culturally specific characteristics (Chapman, Delapp, & Williams, 2014; Terwilliger, Bach, Bryan, & Williams, 2013). For instance, if the client from a collectivist culture is having issues with their parents, it would not be advised to encourage behavior that deviates from their cultural norms such as suggesting they put their needs before the groups. As clinicians we must be cognizant of imposing our values onto our client’s. The purpose is not to force a Eurocentric point of view, but to treat patients based on their cultural norms (Chapman, Delapp, & Williams, 2014). Therefore, there should be continued training on multiculturism and self-awareness for clinicians.

Although, the American Psychiatric Association took steps to make the DSM a more culturally sound document there is room for improvement. The glossary for culture-bound syndromes and the CFI is the most underutilized section in the manual (Blashfield, Flanagan, & Raley, 2010). The CFI is used to capture the contextual factors outside of the symptomology of patients (Blashfield, Flanagan, & Raley, 2010). The APA needs to encourage more clinicians to use the culture formation interview because cultural variables should be considered in all stages of the therapeutic relationship. However, guidance would need to be developed to explain to mental health professionals in which context it should be used.

An alternative option would be to require more training on multicultural treatment practices to compensate for the lack of cultural considerations in the DSM. Having a multicultural lens, when assessing clients will possibly decrease the likelihood of misdiagnosing. If clinicians were more culturally competent, multiculturalism would be more entwined into the diagnostic criteria and not an afterthought. Ultimately, the DSM has to move from a Eurocentric point of view to capture the cultural factors that influence the development of psychopathology.

Cultural Considerations and the Mental Disorders. (2021, Oct 11). Retrieved from https://studymoose.com/cultural-considerations-and-the-mental-disorders-essay 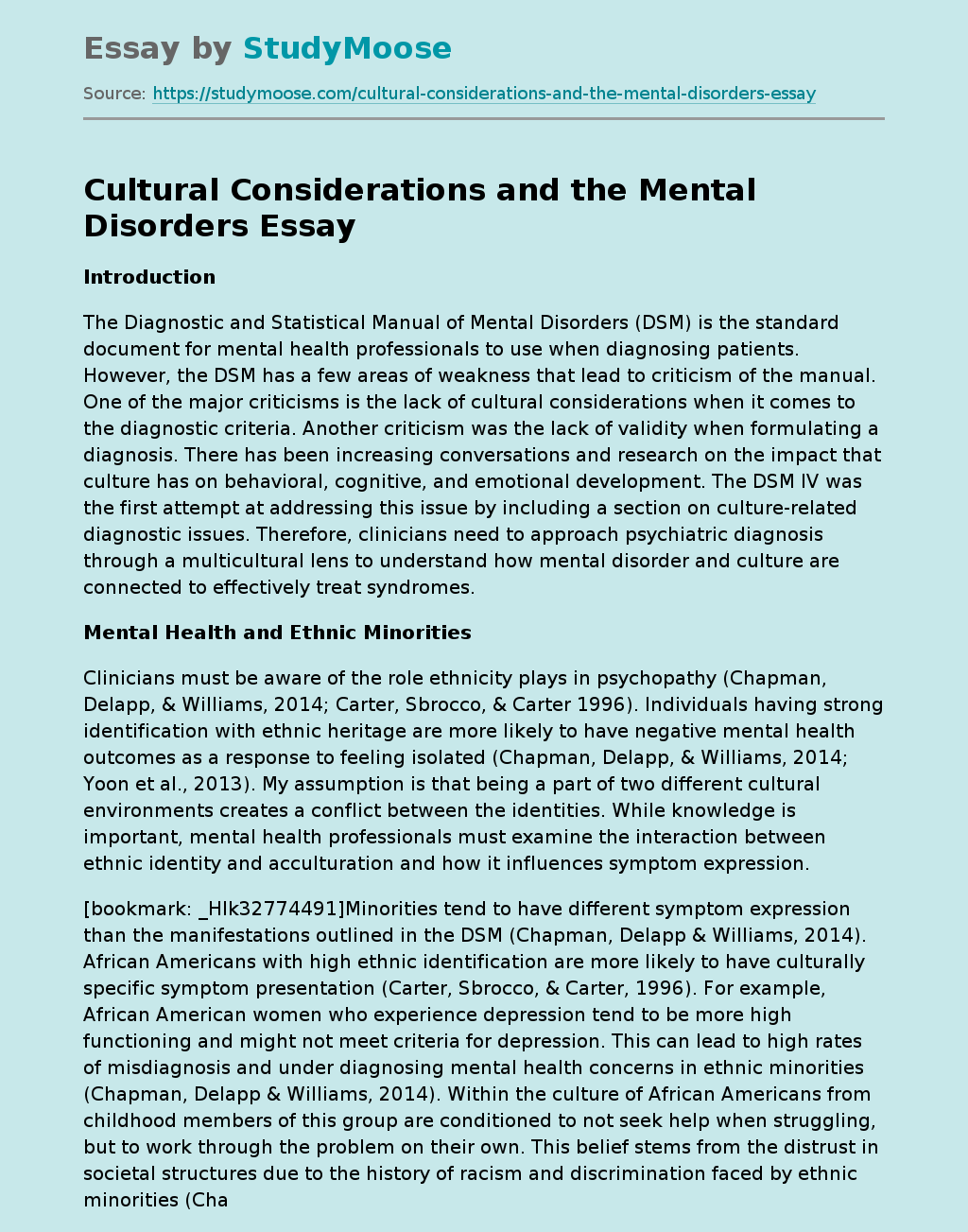