Part of the reason why Genie’s case fascinated psychologists and linguists so deeply was that it presented a unique opportunity to study a hotly contested debate about language development. Nativists believe that the capacity for language is innate, while empiricists suggest that it is environmental variables that play a key role. Essentially, it boils down to the age-old nature versus nurture debate. Do genetics or environment play a greater role in the development of language? Nativist Noam Chomsky suggested that the acquisition of language could not be fully explained by learning alone.

Don't use plagiarized sources. Get your custom essay on
“ Critical Period and Language Acquisition ”
Get custom paper
NEW! smart matching with writer

Instead, he proposed that children are born with a language acquisition device (LAD), an innate ability to understand the principles of language. Once exposed to language, the LAD allows children to learn the language at a remarkable pace. Linguist Eric Lenneberg suggests that like many other human behaviors, the ability to acquire language is subject to what are known as critical periods.

A critical period is a limited span of time during which an organism is sensitive to external stimuli and capable of acquiring certain skills.

According to Lenneberg, the critical period for language acquisition lasts until around age 12. After the onset of puberty, he argued, the organization of the brain becomes set and no longer able to learn and utilize language in a fully functional manner. Genie’s case presented researchers with a unique opportunity. If given an enriched learning environment, could she overcome her deprived childhood and learn language even though she had missed the critical period? If she could, it would suggest that the critical period hypothesis of language development was wrong.

If she could not, it would indicate that Lenneberg’s theory was correct.

Despite scoring at the level of a one-year-old upon her initial assessment, Genie quickly began adding new words to her vocabulary. She started by learning single words and eventually began putting two words together much the way young children do. Curtiss began to feel that Genie would be fully capable of acquiring language. After a year of treatment, she even started putting three words together occasionally. In children going through normal language development, this stage is followed by what is known as a language explosion. Children rapidly acquire new words and begin putting
them together in novel ways. Unfortunately, this never happened for Genie. Her language abilities remained stuck at this stage and she appeared unable to apply grammatical rules and use language in a meaningful way. At this point, her progress leveled off and her acquisition of new language halted.

While Genie was able to learn some language after puberty, her inability to use grammar (which Chomsky suggests is what separates human language from animal communication) offers evidence for the critical period hypothesis. Of course, Genie’s case is not so simple. Not only did she miss the critical period for learning language, she was also horrifically abused. She was malnourished and deprived of cognitive stimulation for most of her childhood. Researchers were also never able to fully determine if Genie suffered from pre-existing cognitive deficits. As an infant, a pediatrician had identified her as having some type of mental delay. So researchers were left to wonder whether Genie had suffered from cognitive deficits caused by her years of abuse or if she had been born with some degree of mental retardation. 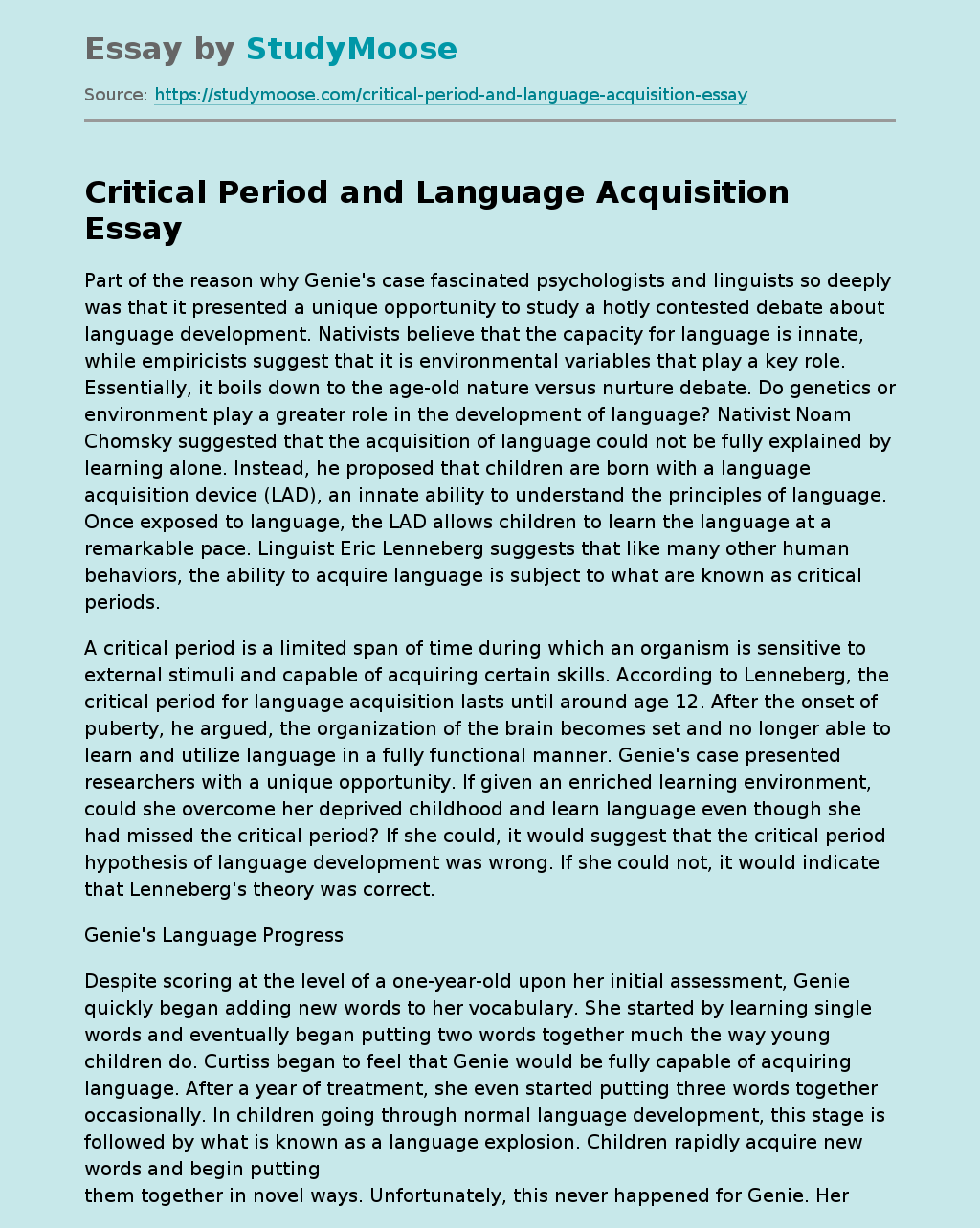