Hills Like White Elephants’ is one of the finest short stories written by Earnest Hemingway. It is also a perfect example of his minimalist style of narration. This story gives the readers ample scope to draw their own conclusions about what the characters are discussing. There is a man and a woman who are the main characters of the story. With the little cues that the writer gives from time to time, it can be inferred that the characters are discussing about abortion of the foetus that the woman is carrying in her womb.

Don't use plagiarized sources.
Get Your Custom Essay on hills like white elephants analysis Just from $13,9/Page

So the main idea of the story is ‘abortion. ’

The story revolves around the theme of how different the idea of abortion means to a man and a woman. For a man abortion is just like a simple operation, which will make life better, but for a woman it is a sense of loss, which is irreplaceable. For a man who considers a relationship just a means of fun and freedom, the possibility of a child seems as an obstacle of life.

For a woman a relationship is a means of achieving stability in life and possibility of a child is like a sign of good times ahead. Hemingway has presented this conflict of perceptions quiet remarkably.

Hemingway has made use of a lot of symbolism to put across the viewpoints of the characters. As soon as the reader starts reading, symbolism greets him. The title, ‘Hills Like White Elephants’ itself is symbolical. It is symbolical to the man and the woman in different ways. For the woman the hills in distance are like beautiful and rare white elephants, which signify how she views her unborn child. While for the man it is a great obstacle and the end of the horizon. The treatment of the story is unique as it is presented in the form of a conversation.

Direct speech rather than narration helps in putting forward the depth of opinions of the characters more effectively. Some of the readers might have to read the story several times to understand the theme and main idea. However one main point is very clear since the very beginning that the two characters have different viewpoints. The other thing that immediately strikes the reader is that the man is more adamant than the woman. Though the woman is equally desperate about her stand on the issue, the man is stronger in putting forward his point.

This impact was the primary reason why I chose this story. I found it very appealing and intriguing. I felt the urge to know more. Though the theme is not very unique, the way it has been presented adds to the story’s value quotient. After reading this story I learnt many things. I learnt how a tight and crisp conversational style could make a simple idea very interesting. From the characters of the story, I learnt how to give importance to the other person even when you do not agree with his point of view. Both the characters were against each other’s point of views but were respecting each other otherwise.

The man was constantly letting the woman feel that she is loved even when he was trying to influence her to sacrifice her happiness. From the writing style of Hemingway, I learnt that sometimes leaving certain things unsaid helps in gaining the interest level of the readers. Works Cited SVCC 2008. Hills Like White Elephants 22nd June 2008 <http://www. moonstar. com/~acpjr/ Blackboard/Common/Stories/WhiteElephants. html> Wikipedia 2008. Hills Like White Elephants 22nd June 2008 < http://en. wikipedia. org/wiki/ Hills_Like_White_Elephants> 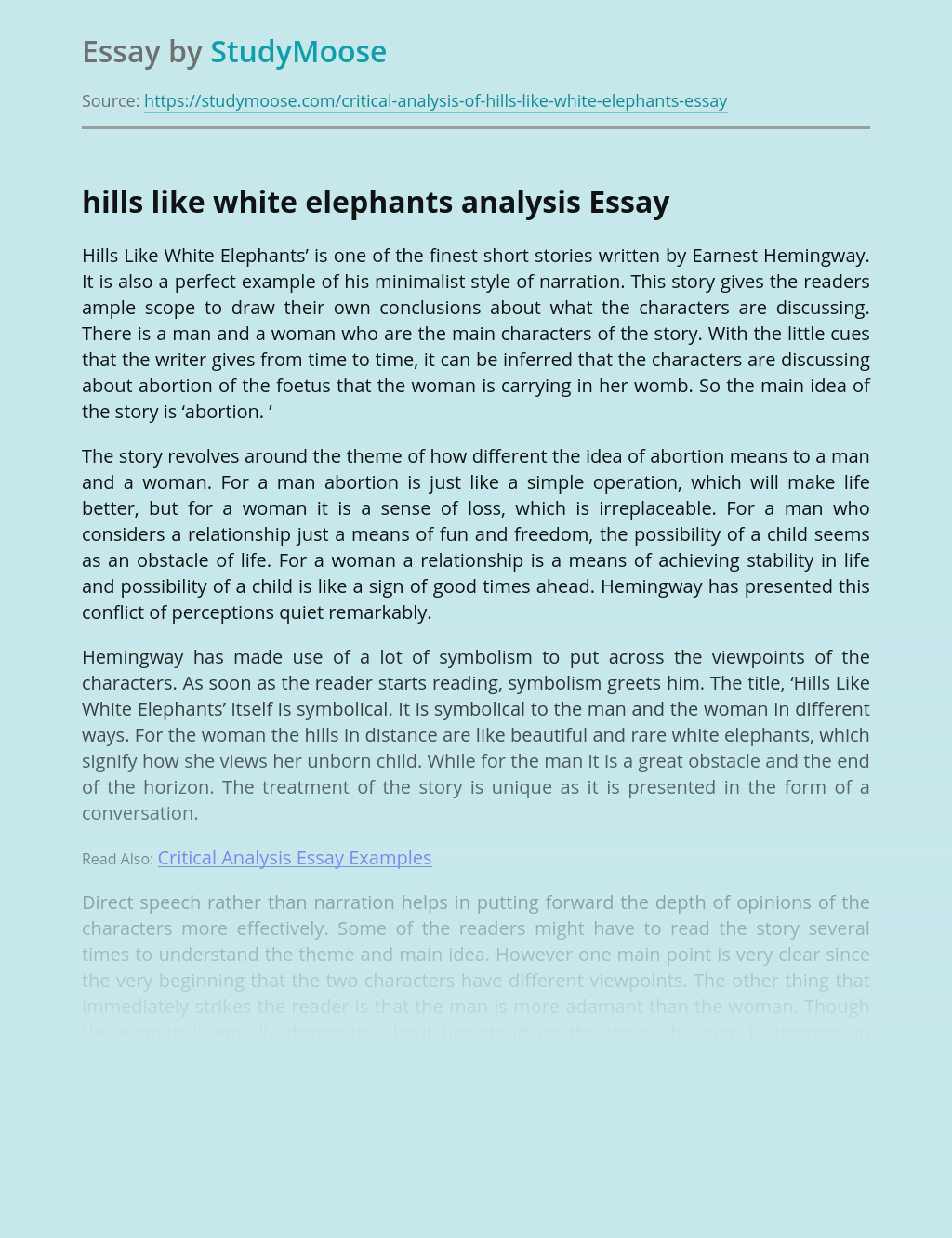 “I was once a student.” I was 4 years old when I first entered kindergarten. I remember those times before going to school, my father would tell me to play and mingle with my classmates, be friendly, and not have fight with anyone. Then my mother would say that I should listen to our teacher...

Lee v R: Lee was indicted was on a charge of assault of Patricia Jones with intent to rob whilst armed. Mr. Calin gave evidence in a written statement stating that the appellant said to him that he fired two shots but during trial he said he did not recall saying that. The trial judge...

Get Essay
How to Say Nothing in 500 Words -Response

The writer of this text gave some very influential information that I could really use to further develop my writing skills. I admit that I do generally use common things that everyone uses and that do affect my scores on essays. After reading this, I really want to improve my essays by using more descriptive...

Catherine Mansfield revolutionized the 20th Century English short story. In her works, she breaks away from the tradition of plots and endings. Her works are open-ended. She is the earlier writer who used the technique of stream-of-consciousness in her writings. Where, Plot is secondary to characters. Her prose gives a vivid and strong picture of...