Crazy Eddie was an American retail store chain run by the Antar family, which was established as a private company in 1969 in Brooklyn, New York by businessmen Eddie and Sam M. Antar. The fraud at Crazy Eddie was one of the longest running in modern times, lasting from 1969 to 1987. Crazy Eddie became a known symbol for corporate fraud in its time, but has since been eclipsed by the Enron, Worldcom and Bernie Madoff accounting scandals.

Eddie Antar, the CEO of the company who was the mastermind in the fraud, was skimming money from sales taxes that he only partially remitted to the government, while using part of the money to give steep discounts to customers. Much of the rest of the money he used to fund a partying lifestyle, while secreting a fortune at home and abroad.

He also repackaged used and damaged electronics and resold them to customers as new. When electronics companies refused to supply him because he was selling the products to his customers below list price, he instead sourced the products from suppliers in other countries on the gray market.

He used massive sales promotion strategy to promote his company’s name and products. The television ad of the company was very much popular that time. The company began to grow rapidly and had several branches across the country. As the chain grew in size, the Antar family started planning for an initial public offering (IPO) of Crazy Eddie and scaled back the fraud so that the company would be more profitable and get a higher valuation from the public market.

This strategy was a success and Crazy Eddie went public in 1984 at $8 per share. The final phase of the Crazy Eddie fraud began after the IPO and was motivated by a desire to increase profits so the stock price could move higher and the Antar family could sell its holdings over time. Management now reversed the flow of skimmed cash and moved funds from secret bank accounts and safety deposit boxes into company coffers, booking the cash as revenue. The scheme also involved inflating and creating phony inventory on the books and reducing accounts payable to boost profits at the company.

The electronics chain used the young, inexperienced, undereducated and under skilled auditors for the audit purpose. The chain was able to fool young auditors by showing them inventory stock rooms filled with empty boxes of electronics gear, while distracting them with attractive female workers so they wouldn’t bother to look at what was inside or behind the stacks of boxes. They had a concept that if the auditor was wearing a suit, it was sure he wasn’t going to get it dirty by moving the boxes.

Eddie Antar was the mastermind behind the various schemes and hired his relatives to work at the electronics chain to help aid and abet the fraud. Eddie Antar paid for his cousin Sam E. Antar to learn accounting so he could eventually work at the growing company’s small auditing firm, Penn and Horowitz. In 1981, Sam passed the CPA examination with a 90% and scored in the top 1% in the country. He later became the Penn and Horowitz Company’s CFO in 1986. All the family members were bound together by a culture of crime and were working as a team for commitment and concealment of crime.

The company was making so much money that Eddie Antar was having trouble finding places to put it. He ran out of hiding places in his office and home, and eventually began traveling to Israel and Switzerland to stash the money in secret bank accounts. However, the scheme began to unravel when his wife found out he was cheating on her, and the family took sides in the dispute. The fraud was finally uncovered in 1987 after the Antar family was ousted from Crazy Eddie after a successful hostile takeover by an investment group. The acquirer found out how overvalued Crazy Eddie really was and hired another outside auditor to look closely at the books.

Crazy Eddie limped along for another year before being liquidated to pay creditors. Eddie Antar, the CEO of Crazy Eddie, was charged with securities fraud and other crimes, but fled to Israel before his trial. He spent three years in hiding until he was eventually tracked down by authorities in 1992 and extradited back to the U.S. to face criminal charges. Antar and two other family members were also convicted for their role in the fraud. In 1997, Antar was sentenced to eight years in prison and paid large fines. He was later released in 1999.

The red flags in the Crazy Eddie, Inc. financial fraud case which could notify the potential fraud were as follows:- The tight knit Antar family ruling Crazy Eddie had virtual absolute control over all aspects of the business. Very poor audit trails and documentation.

Major self-dealing transactions and related party transactions by family members. Substantial increases in wages from below market wages before the company went public. In 1985, an attempt was made to falsify certain store inventories which was uncovered by the auditors. The auditors accepted an excuse that it was not sanctioned by management. Substantial increases in gross margins, profits, inventories, debit memos etc. from prior periods for no logical reason. Significant volume of outstanding deposits in transit at fiscal year end. Individual deposits in transit extremely high in relation to normal amounts at fiscal year end. Unusually high inventory volumes in stores where physical counts were not observed by outside auditors. Inventories in many individual stores were in excess of space capacity.

Major differences between amounts confirmed from vendors for accounts payable and amounts reported on Crazy Eddie’s books and records. Use of “gross margin method” to value inventories during interim periods instead of taking interim inventory counts. Change of accounting methods for purchase discounts and trade allowances in 1987 from cash basis to accrual basis noted in footnotes with no accounting adjustments. Small CPA firm that conducted Crazy Eddie audits before (then big eight firm took over audits) had a significant revenue base from Crazy Eddie. Controller and later CFO for Crazy Eddie (Sam E. Antar) worked for small CPA firm that audited Crazy Eddie books.

The reason, Crazy Eddie was able to conceal and commit the fraud for such a long time could be the inefficiencies of the auditor and the government to uncover the fraud. The government, auditors and investors were fooled by the company’s flamboyant founder and CEO, Eddie Antar and his family. Some of the biggest Crazy Eddie Audit Errors were as follows:- Assuming a proper audit can be conducted in the absence of credible internal controls. Under educated, under skilled, and under experienced audit staff. Over using audits as training grounds for inexperienced audit staff. Lack of investigative or forensic accounting skills by auditors. Failure to ask proper questions to the concerned persons.

Assuming the answers to good questions as correct without verification. Failure to ask follow up questions.
Lack of professional skepticism.

Failure to conduct adequate verification of accounts payable balances. Failure to contact vendors when major discrepancies were identified as vendors sent back verification requests. Failure to secure audit work papers left on premises during the audit by leaving keys to trunks containing audit documents on company premises. Allowing company personnel to view audit work papers in process. Auditors signed off on financial reports to outside directors and allowed the issuance of financial statements before the fiscal year 1987 audit was completed and backed into the numbers.

The Fraud Triangle
The Crazy Eddie, Inc. financial fraud case, if linked up with the fraud triangle, following result can be obtained:-
a. Incentives/Pressures
Greediness
Desire of Luxurious Lifestyle
Expensive extramarital relationships of Eddie Antar
Pressure to maintain social status
Pressure to sustain in competitive market
b. Opportunities
Lack of internal and external controls
Lack of audit trail
Inability of the auditors to judge performance quality
Lack of outsiders’ access to information

Sam Antar, former CFO of Crazy Eddie gave a statement, – “we committed crime simply because we could. Criminologists like to analyze white collar crime in terms of the ‘fraud triangle’ — incentive, opportunity, and rationalization. We had no rationalization. Simply put, the incentive and opportunity was there, but the morality and excuses were lacking. We never had one conversation about morality during the 18 years that the fraud was going on.” This statement shows that there was no rationalization used while committing the fraud, we could assume that following rationalizations could have been used by them:- Whatever they were doing did not hurt anybody else.

Whatever they were doing was not wrong.
Moral justification like, “Everyone else is doing it, so it must not be so bad to do this” could have been used. 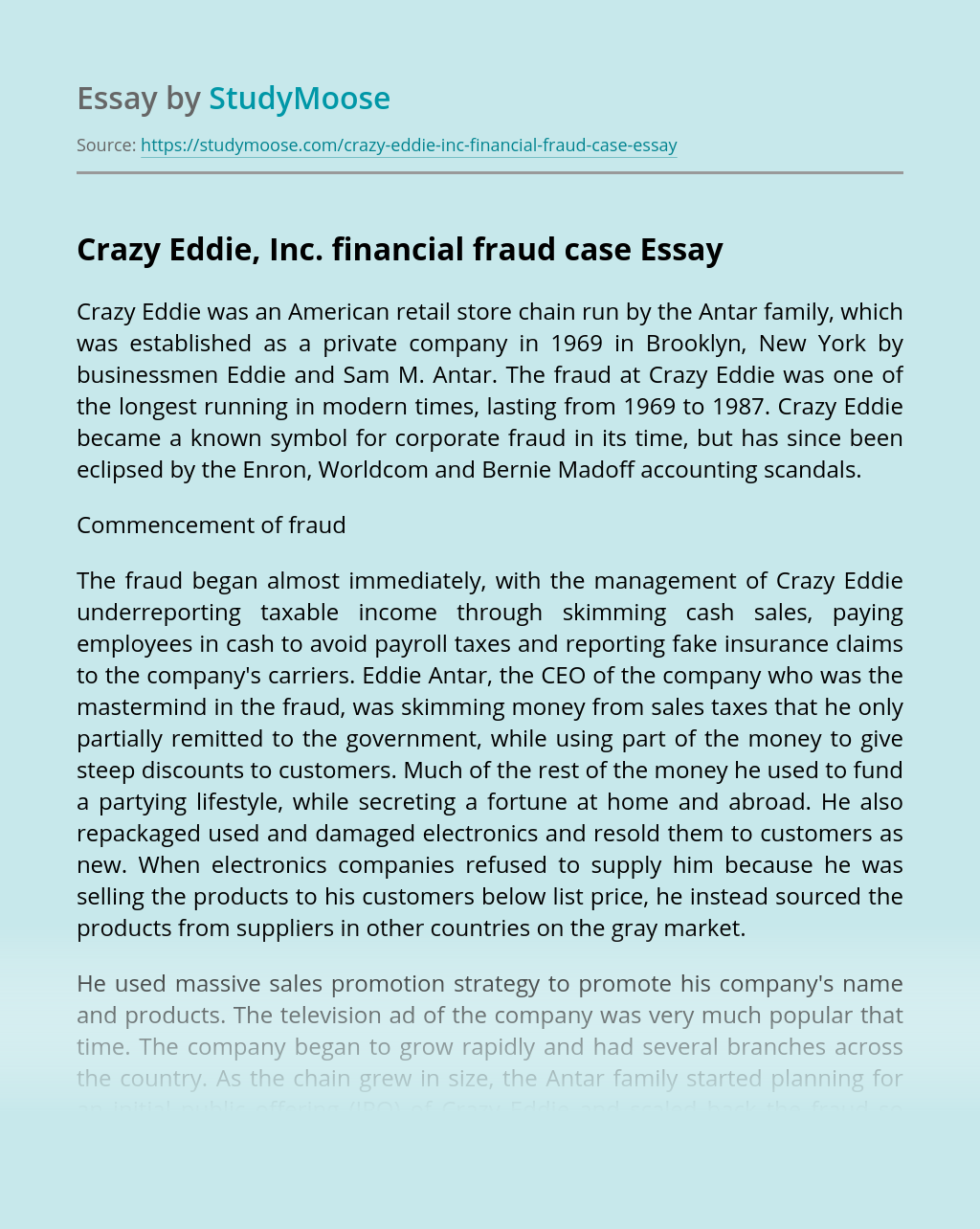 Generally, ethics refer to moral principles and values. Random House Webster’s College Dictionary notes that ethics are “the rules of conduct recognized in respect to a particular class of human actions or governing a particular group, culture, etc. ” An individual’s ethics generally define what that individual believes to be right and wrong. Professional ethics...

Crazy Eddie was an American retail store chain run by the Antar family, which was established as a private company in 1969 in Brooklyn, New York by businessmen Eddie and Sam M. Antar. The fraud at Crazy Eddie was one of the longest running in modern times, lasting from 1969 to 1987. Crazy Eddie became...

A major focus of the lawsuit Chevron Chemical filed against Touche Ross was the auditing profession’s rules regarding the “subsequent discovery of facts existing at the date of the auditor’s report”. Those rules distinguish between situations in which a client cooperates with the auditor in making all necessary disclosures and situations involving uncooperative clients. Briefly...

AUDIT FAILURE OF WORLDCOM Group 1 Background • WorldCom, first named LDDS (Long Distance Discount Services), grew largely by aggressively acquiring other telecommunications companies in 1990s. • For a time, it was the United State’s second largest long distance phone company (after AT&T). Background However, the year 2002 comes… • In March, the SEC began to investigate WorldCom as it reported...