Costs and benefits of dollarization

The loss of seigniorage

One important cost that Mexico will realize as a result of dollarization will be the loss of seigniorage. Seigniorage is the revenue that a country realizes from issuing currency (Joint Economic Committee).

The difference between the cost of putting money into circulation and the value of the goods the money will buy is called net seigniorage (Id. ). In losing the ability to print its own currency, Mexico will lose the revenue that would have occurred from replacing their peso currency with US dollars (Id.

Don't use plagiarized sources. Get your custom essay on
“ Costs and benefits of dollarization ”
Get custom paper
NEW! smart matching with writer

This loss is called the stock cost and refers to the cost of obtaining enough foreign reserves necessary to replace domestic currency in circulation (Id. ). A study conducted by Stanley Fischer, who today is the First Deputy Managing Director of the IMF, determined that the stock cost of official dollarization for an average country would be somewhere between 4 to 5 percent of GDP (Fischer p. 305). However, the International Monetary Stability Act of November 1999, allows the Secretary of Treasury to certify officially dollarized countries as eligible to receive rebates of seigniorage from the US (Joint Economic Committee).

These rebates would amount to 85 percent of the seigniorage the US realizes, as determined by a formula stipulated in the act (Id. ). These rebates would serve to substantially lessen the impact of lost seigniorage for the Mexican government. Once dollarization has been adopted, conversion costs must also be taken into account. In addition to the seigniorage costs which we’ve discussed, there will be one time costs to dispose of old currency, as well as to convert prices, computer programs, cash registers and vending machines to the new dollar currency (Id.

Another issue is the cost of losing Mexico’s central bank as lender of last resort (Id. ). The International Monetary Stability Act plainly states that the US will not act as a lender of last resort to countries that officially dollarized (Id. ). This could cause potential problems for Mexico’s banking system in the event that a crisis should occur. However, there are a few possible solutions to this problem. First, Mexico could use the rebated seigniorage in order to build up a reserve for use in the event of a banking crisis.

As we had suggested earlier, reforming the central bank to act as a regulator of financial institutions would be one way to implement this process. Another alternative would be to secure credit from foreign banks that would be willing to extend credit to Mexico if a crisis does arise (Id. ). One more major cost of dollarization would be the loss of Mexico’s power to control its own monetary policy (Cross Border). Mexico will not have the power to create dollars, make changes in the money supply or the exchange rate (Id. ).

Thus, if Mexico were hit by a crisis that developed outside the country, the government would have fewer options regarding the management of the economy (Id. ). However, given Mexico’s history of mismanagement over the past 25 years (the peso lost 98 percent of its value vs. the US dollar during this time), losing control of monetary policy may be a blessing for the economy in the long run. History has shown that Latin American countries that have exercised greater flexibility in monetary policy have made interest rates more rather than less volatile in response to changes in U.S. interest rates (Joint Economic Committee).

Thus, in losing the ability to shift its monetary policy, Mexico will be able to take advantage of the United States’ interest and inflation rate stability. One advantage of dollarization is that it would serve to eliminate the need to continually support the peso (Id. ). Although Mexico has relied on a floating exchange rate since 1994, the system is not a pure floating rate (The Cato Journal). Thus, Mexico has had to occasionally intervene in order to support the peso.

Eliminating the need to support the peso would remove one policy that could potentially result in a recessionary environment for the country (see graph 1). In addition, by eliminating the Mexican government’s power to print money, dollarization will foster budgetary discipline (Joint Economic Committee). Simply put, the Mexican government will no longer be able to hide deficits by printing more money (Id. ). They will now have to use more transparent methods to resolve budgetary issues, such as raising taxes or taking on debt (Id.).

Dollarization would also bring Mexican price levels on par with US price levels. By adopting the US dollar as its official currency, Mexico will be able to lower its notoriously high inflation rate down to US levels (see graph 2) (Joint Economic Committee. ). The reduction in inflation would lead to a stabilization of interest rates within Mexico (Id. ). These conditions would lead to an improvement in Mexico’s credit rating on the bond market (Id. ).

The higher credit rating, elimination of exchange rate risk (from dollarization), and stabilization of interest rates would lead to more foreign direct investment, which would spur growth within the country (Id. ). In addition, lower interest rates would make it easier for smaller businesses to obtain lending, which would increase competition, create more jobs and increase consumer surplus through lower prices. Economic stability would also make it easier for Mexico to secure foreign credit for use in the event of a banking crisis (as we had suggested earlier).

Additionally, the economic growth that would result from the stabilization of inflation and interest rates should help to create and maintain an environment of political stability within Mexico. This would benefit both politicians and ordinary people by giving the controlling administration a chance at holding on to power long enough to implement policies that could be beneficial for the prosperity of the country. Finally, dollarization would eliminate both transaction costs and exchange rate risks with regard to trade between the US and Mexico (Id.).

Mexico is currently the US’s second largest trading partner in terms of combined imports and exports, second only to Canada (see graph 3) (US Census). Removing the transaction costs associated with converting from one currency to the other and the elimination of exchange rate risks will help to strengthen and increase Mexico’s trade status with respect to the US. Furthermore, the elimination of exchange rate risks will also encourage foreign direct investment within Mexico, which should add to the growth of the economy.

The benefits of dollarization

The benefits of dollarization outweigh the proposed costs to the Mexican government. Mexico has a history of monetary policy mismanagement, high inflation, and unstable exchange rates. Dollarization would create economic stability for Mexico by lowering the inflation rate, which would lead to more stable interest rates. Furthermore, exchange rate variability would be eliminated. In order to minimize the potential costs and risks involved with the dollarization process, we recommend that the Mexican government follow all of the steps we have outlined in section one of this report.

In addition to the steps in section one; the Mexican government should reform their central bank into a regulatory agency to monitor financial institutions, once dollarization has begun (Joint Economic Committee). This would eliminate the costs of setting up an entirely new organization to monitor financial institutions, and could also leverage off of the existing expertise that the current organization has with regard to the country’s banking system. Furthermore, the government should enable the new central bank to collect rebated seigniorage from the US, and to secure lines of credit from foreign banks.

These monies should be used as reserves in case the banking system in Mexico experiences some sort of financial crisis. Thus Mexico would be able to retain some limited form of lender of last resort ability, which negates one of the major costs of dollarization. We feel that implementing these steps will ensure a successful transition for Mexico towards dollarization. Although the benefits of dollarization may take time to materialize, we strongly feel that in the long run, dollarization is the best way to stabilize and strengthen the Mexican economy.

Costs and benefits of dollarization. (2020, Jun 02). Retrieved from https://studymoose.com/costs-benefits-dollarization-11057-new-essay 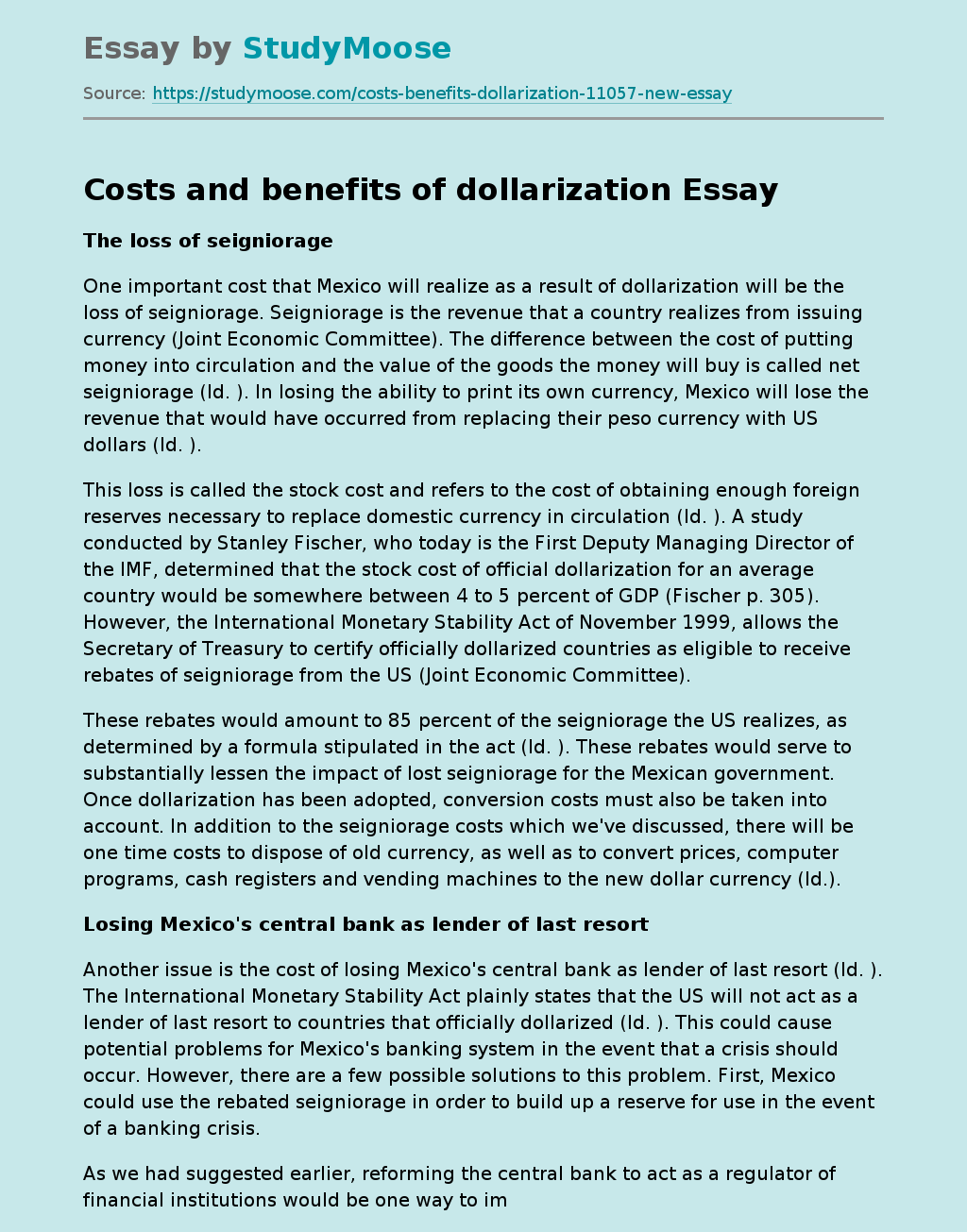