Consumption has been an integral part of modern society throughout

Consumption has been an integral part of modern society throughout the years, with it taking the interests of many social scientist over the centuries. First signs becoming evident towards the 18th century when the gaps between the social classes became even more stretched with the likes of the middle class indulging in the world of luxury products. We see that with the advancements in mass productions of various products, luxury, groceries etc, followed the growth and domination of supermarkets within this field, leading to the pros and cons of a consumer society.

Don't use plagiarized sources. Get your custom essay on
“ Consumption has been an integral part of modern society throughout ”
Get custom paper
NEW! smart matching with writer

Consumerism progressed into the industrial revolution, where the ‘mass production’ of items became more available. As the consumerism society grew and the years went on it was clear to see the shift in the social world with it now becoming that, people put consumption and social identity before aspects of life like community, religion and so on which would have been of high value many years before, this essay will attempt to cover a number of ideas and discuss how they impact the social world today.

Looking into consumption and what the impact of a consumer society has had on the social world we live in, it is clear to see how the ideas around it has changed. Also, how many of us interact within a social setting, specifically our developing social identity. Defining us as human beings and the ways in which we behave. This idea has been taken on by many social scientist over the years, a well-known theorist being Zygmunt Bauman(1988) who looked into what he called the ‘the seduced and the repressed’.

The idea of a ‘consumer society’ meant that it was open to a wide range of people giving them choice and freedom within their purchases and involvement in the social world. It is clear to see the shift within the social world due to the impact of consumerism, as now people are able to make their position within society clear not just through leisure activities and specific hobbies, as before, but through their choice of material positions like cars and home d?cor. Bauman is trying to show that although we do still live in society where people have to work to be able to survive, but it also means that they are not restricted in how they shape their social identities, and this is largely down to consumption.

There are many pros and con arguments surrounding the idea of a consumer society and the advancements the social world has gained thanks to the ever-growing consumer lifestyle. this is seen in one area through the ever growing ‘supermarket’ side to consumerism. With the advancing supermarkets and there being four dominating supermarkets in the UK, those being. Tesco’s. Morrison’s, Asda’s and Sainsbury’s. a leading example of a town that has been in some way over run by one supermarket in Inverness in the highlands of Scotland. Inverness has become well known for being called “Tesco Town” due to its over indulgence in the popular supermarket with four covering the population of Inverness, alongside a morrisons and M&S. These leading supermarkets are well known within households in the UK and are those holding high positions of power in the grocery market. it being that Tesco’s for example with its high number of shops within Inverness hold a 56% share of the grocery market.

The term Monopolisation is often heard within the discussion of consumerism, where it is often seen that leading supermarkets have a significant power of others, domineering the food market and often making an unfair market for other smaller stores. As with many changes in society there come the pros and cons of a growing market, with the improvements in supermarket trading, came more accessibility for consumers and more choice in products. As modern technology has advanced, consumer can now order their groceries online creating a completely changed way in which people shop. Though many people are supportive of supermarkets and all that they contribute to society with the possibility of redevelopment within areas suffering from low employment and poverty. One of the main cons of an advancing consumer society is the downfall of small traditional shops due to bigger shops taking control f the market, with many small business’s no longer being able to compete and many consumers finding they are losing the traditional and almost personal ideology behind shopping being lost. Instead being replaced by the almost identical shopping experience throughout the leading supermarkets.

It is evident that through the year’s consumerism has become a much less exclusive part of society and has in fact enabled people who would be isolated in other aspects of life to in turn integrate themselves as a consumer. The positive sides of a consumer society being the ability to improve towns and cities through access of jobs in the grocery and food market. Making foods more accessible and giving more choice to many consumers. The cons of a vastly dominant consumer society with the loss of certain values and small business suffering as they are unable to compete against the large supermarkets In some ways limiting our choices in where we shop and less and less independent shops like green grocers and butchers are surviving the market

Consumption has been an integral part of modern society throughout. (2019, Nov 25). Retrieved from https://studymoose.com/consumption-has-been-an-integral-part-of-modern-society-throughout-example-essay 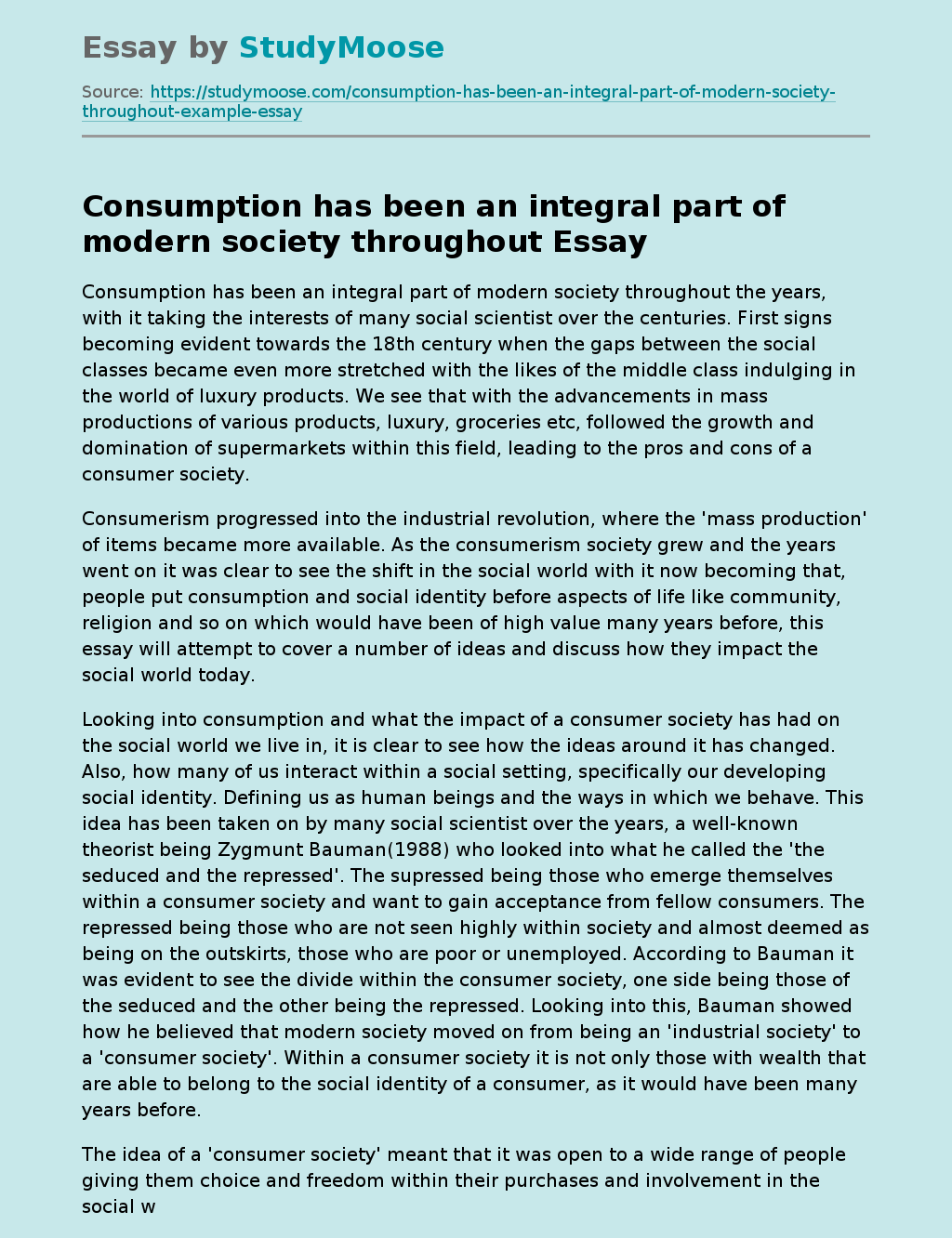