Conjoined by Judith Minty is a poem about a broken relationship

“Conjoined” by Judith Minty is a poem about a broken relationship. Judith Minty uses many similes, metaphors, and analogies to describe an unhappy union of two people and the inseparability of marriage. The sub title is “ a marriage poem” which sets the theme of the poem, but until you start reading you do not realize that it is an unhappy view towards marriage. She uses words with negative connotation such as “heavy”, “deformed” and “accident” to describe the relationship in a marriage.

Don't use plagiarized sources. Get your custom essay on
“ Conjoined by Judith Minty is a poem about a broken relationship ”
Get custom paper
NEW! smart matching with writer

She ends the poem with “We cannot escape each other.

” This is a depressing ending to her poem because she talks about marriage as if it is a prison. Minty uses a simile to describe marriage by writing “An accident, like the two-headed calf rooted in one body, fighting to suck at its mother’s teats”. She uses the calf with two heads as a symbol of the two people involved in a marriage. Both have two separate minds to think for themselves but are combined in a relationship.

When she says “fighting to suck at its mother’s teats” she talk about how two people in a marriage fight to get their way and their opinion in against each other.

This enhances the poem because it shows how she compares marriage to an accident of a two-headed calf with a simile which shows her negative view towards marriage. Judith Minty uses a metaphor when she writes, “The onion in my cupboard, a monster actually two joined under one transparent skin… ” She uses the comparison of the onion to a monster to translate that marriage can be a horrible thing.

She uses the transparent skin of the onion as the bond between two people in a marriage. The metaphor enhances the poem because it is the first line of the poem and it sets the unpleasant tone immediately.

Minty uses a lot of diction in her poem “Conjoined” which shows her negative view towards marriage. “To sever the muscle could free one, but might kill the other. ” She uses this sentence to show that divorce could end their unhappy marriage and free one of them, but the other will be left heart broken and hurt. She uses words with opposite connotation like “free” ad “kill” to show the opposite reactions of feelings that divorce may have. In this sentence she is referring back to the analogy of Siamese twins, if the twins were cut apart one of them would be free and one would die just like the relationship Minty is talking about.

The tone of “Conjoined” by Judith Minty is a troubled view on marriage. You get a general feel of unhappiness towards marriage with her analogies, similes, metaphors and diction that she uses in her poem. Usually, marriage is associated to positive words such as happy, commitment, love, and unity. In Judith Minty’s poem she uses depressing words when describing marriage. She calls it a “monster” and an “accident. ” Minty talks about the unity of two people for years as if it was a bad thing. “… doomed to live, even make love, together for sixty years. ” Other people would see a marriage of sixty years as a good thing and would celebrate it.

Conjoined by Judith Minty is a poem about a broken relationship. (2017, Aug 01). Retrieved from https://studymoose.com/conjoined-by-judith-minty-is-a-poem-about-a-broken-relationship-essay 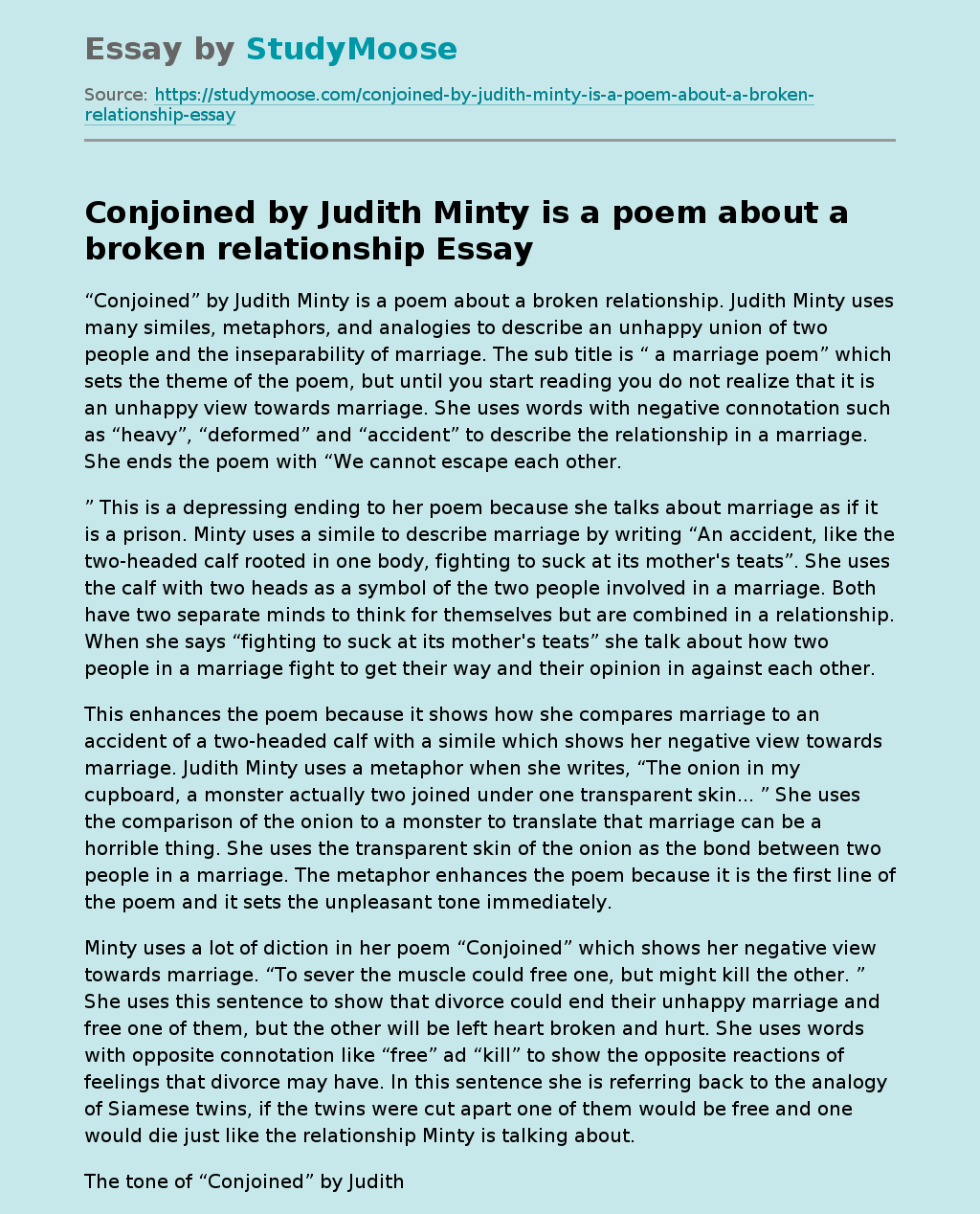