Eminent domain refers to the authority to sequester the private property of an individual, including his rights, without the need of obtaining the consent of the owner (Ryskamp, 2006). This power is also known as compulsory purchase, resumption acquisition or expropriation in other countries such as the United Kingdom, Australia and Canada. The confiscation of private property is generally performed in order for the government of use the aforesaid property.

In other cases, the expropriation is conducted in order for the public to make use of the property (United States v.

Don't use plagiarized sources. Get your custom essay on
“ Compulsory Purchase ”
Get custom paper
NEW! smart matching with writer

CARMACK, 1946). The most frequent reasons for implementing eminent domain actions include the construction of public utilities as well as highways and railroads (United States v. Gettysburg Electric Railway Company, 1896). The concept of eminent domain should not be interchanged and confused with cases wherein a private property is confiscated by a government that is in a revolutionary situation.

Eminent domain is associated with condemnation, which pertains to an action that is implemented by the government that results in the transfer of the title of a property from the original owner to the government.

The term condemnation that is associated with eminent domain should also not be confused with the condemnation that is related to the classification of buildings that are considered to be unsafe for entry and habitation by people due to natural disasters such as earthquakes and other physical damages due to man- or nature-caused events.

Condemnation that is associated with eminent domain states that the government is obtaining a private property or shows an interest in the private property, such as an easement.

Generally, the only thing that remains to be determined and finalized is when a condemnation action is filed in the amount of the appropriate compensation. However, there are also some cases wherein the right to sequester is challenged by the owner of the private property, based on the premise that the attempted sequestration is not for public use, or has not been legally approved or endorsed by the court, or simply because the condemnor did not abide by the standard or proper procedure required by law (Greenhut, 2004).

The exercise of eminent domain is not solely applied to real property (Galperin, 2007). Governments also have the authority to condemn personal property, including supplies that will be employed for military warfare, franchises, as well as other intangible property such as contracts, patents, trade secrets and copyrights. The first case of eminent domain in English law was known as the Dobbie Process or the King’s Prerogative in Saltpeter Case.

The English king required saltpeter as ammunitions of his military and he acquired saltpeter mine that was privately owned. The owner of the private real property sued the king, resulting in the action of the court of establishing the right of the sovereign to sequester any form of private property that has been determined to be needed for public use, without issues of being accused for trespassing. However, such acquisition requires payment or some form of compensation for the taken saltpeter.

When the colonies became the United States and the English Common Law was adopted as the law of the new nation, this principle was accepted. However, different from popular belief, the Fifth Amendment to the Constitution did not describe this right in the United States because this policy was already inherent in common law. The Fifth Amendment restricted the power of eminent domain by requiring that any confiscations be plainly for public use and that an appropriate compensation be provided to the owner of the sequestered private property. 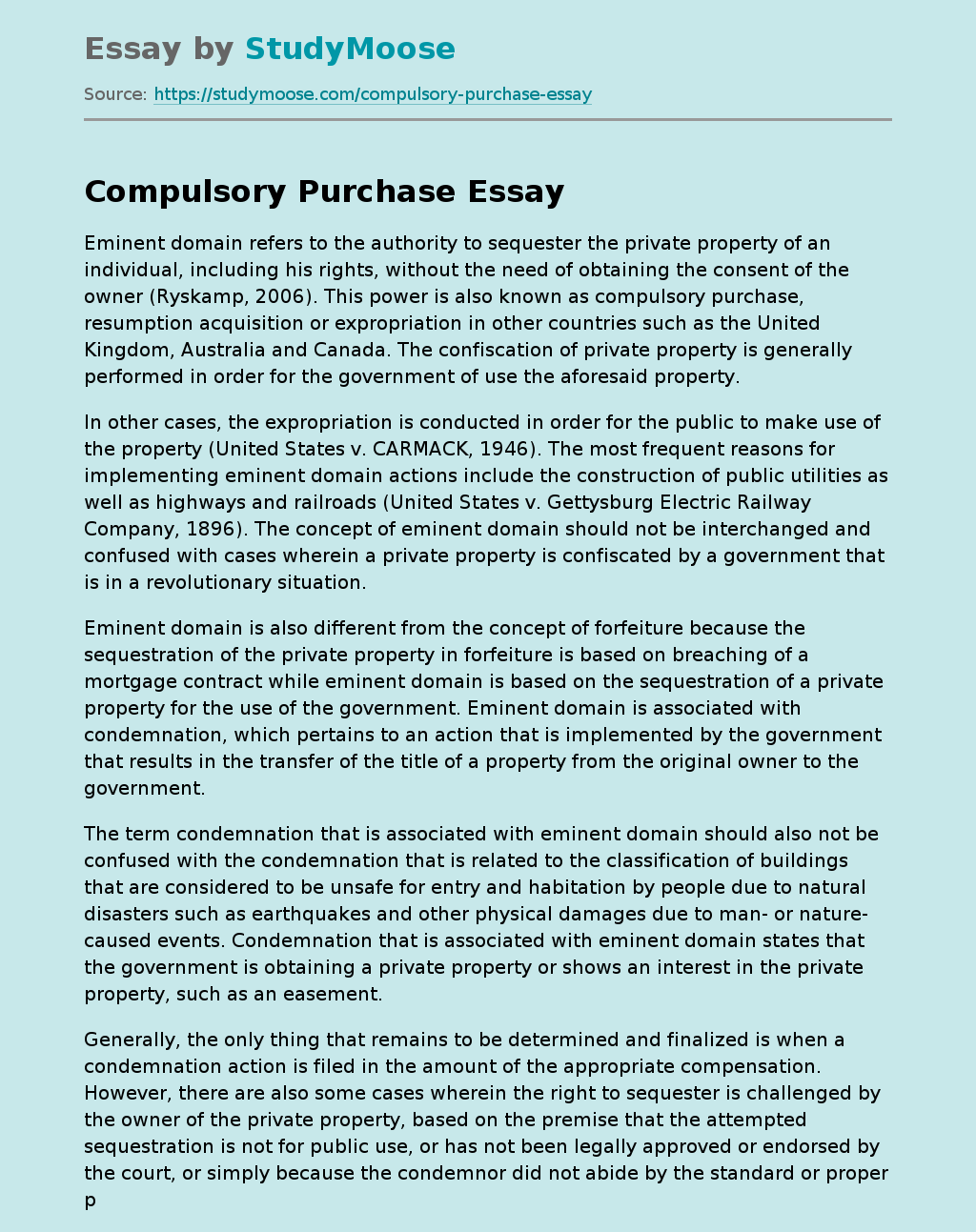