Don't use plagiarized sources. Get your custom essay on
“ Comparison of Sir Gawain and Monty Python Characters ”
Get custom paper
NEW! smart matching with writer

These women are trying to seduce him. While he is trying to resist the temptation in the beginning, he is perfectly willing to give up his chastity at the time Lancelot arrives to save him.

Sir Galahad, who even has the epithet “the Chaste” (Monty Python and the Holy Grail), is according to the Arthurian legend considered the purest and perfect knight. Consequently, he is the only one to possess the Holy Grail, although the moment he enters the castle, he has sex in his mind. Him having impure thoughts and almost failing to keep his chastity shows the impossibility of being a perfect knight.

Sir Gawain is going through a similar situation, but since Monty Python and the Holy Grail is a parody, Sir Gawain’s actions will have more important consequences. He is staying in the castle of Lord Bertilak and his wife. Within his stay at the castle, Lady Bertilak tries to seduce him. With her second attempt, she appeals to Sir Gawain’s courtesy. “When a favour conferred,” she informs him “it must be forthwith accepted:/ That is becoming for a courtly knight who keeps the rules.” (Sir Gawain and the Green Knight 77). Her referring to his courtesy makes it hard for him to withstand. Nevertheless, unlike Sir Galahad, Sir Gawain is not willing to give up is chastity. Yet, he considers it as Lady Bertilak offers him her young body to “do with it what [he] will:” (Sir Gawain and the Green Knight 68). As a chaste knight, he fails his duty to avoid impure thoughts.

Inevitable conflicts occur in both, Sir Gawain and the Green Knight and Monty Python and the Holy Grail, between the individual parts of the Chivalric Code. As Sir Lancelot (Monty Python and the Holy Grail) attempts to save the supposed princess, he is to be brave but at the same time, his courtesy demands him to not interrupt the celebration. He tries to be impossibly brave as he storms in the castle to and kills loads of innocent people thus failing to be impossibly courteous.

When he accepts the green girdle Lady Bertilak offers him he grapples again, but this time in greater dimensions. He is courteous in accepting the girdle but at the same time, he is not honest with his host because he does not exchange this gift with him. Besides, he is breaking his oath with the green knight. The reason Sir Gawain takes the green girdle is that “the man that binds his body with this belt of green […] cannot be killed by any cunning on earth.” (Sir Gawain and the Green Knight 90). Therefore, the Green Night cannot kill him with his blow of the axe as arranged. This oath breaking is the best example of his failure of courtesy. In addition, he takes the girdle because he is afraid to die but true bravery lies in going on despite fear. Hence, he fails to be brave.

He is as cowardly as Sir Robin is in Monty Python and the Holy Grail. Not only has Sir Robin a chicken on his shield, but he also flees from the three-headed knight guarding the way he wants to take. Instead of fighting him as bravery demands, he runs away when the heads do not pay attention to him for a moment. Finally, yet importantly Gawain loses his faith in God when he takes the girdle. He relied on God’s help before he reaches the castle, for example he prays when gets lost in the wilderness and not finds his way until he trusts in God. As a Christian knight, he is supposed to have confidence in God, but by taking the green girdle as a symbol of magic, he gives up the most important idea of medieval time. 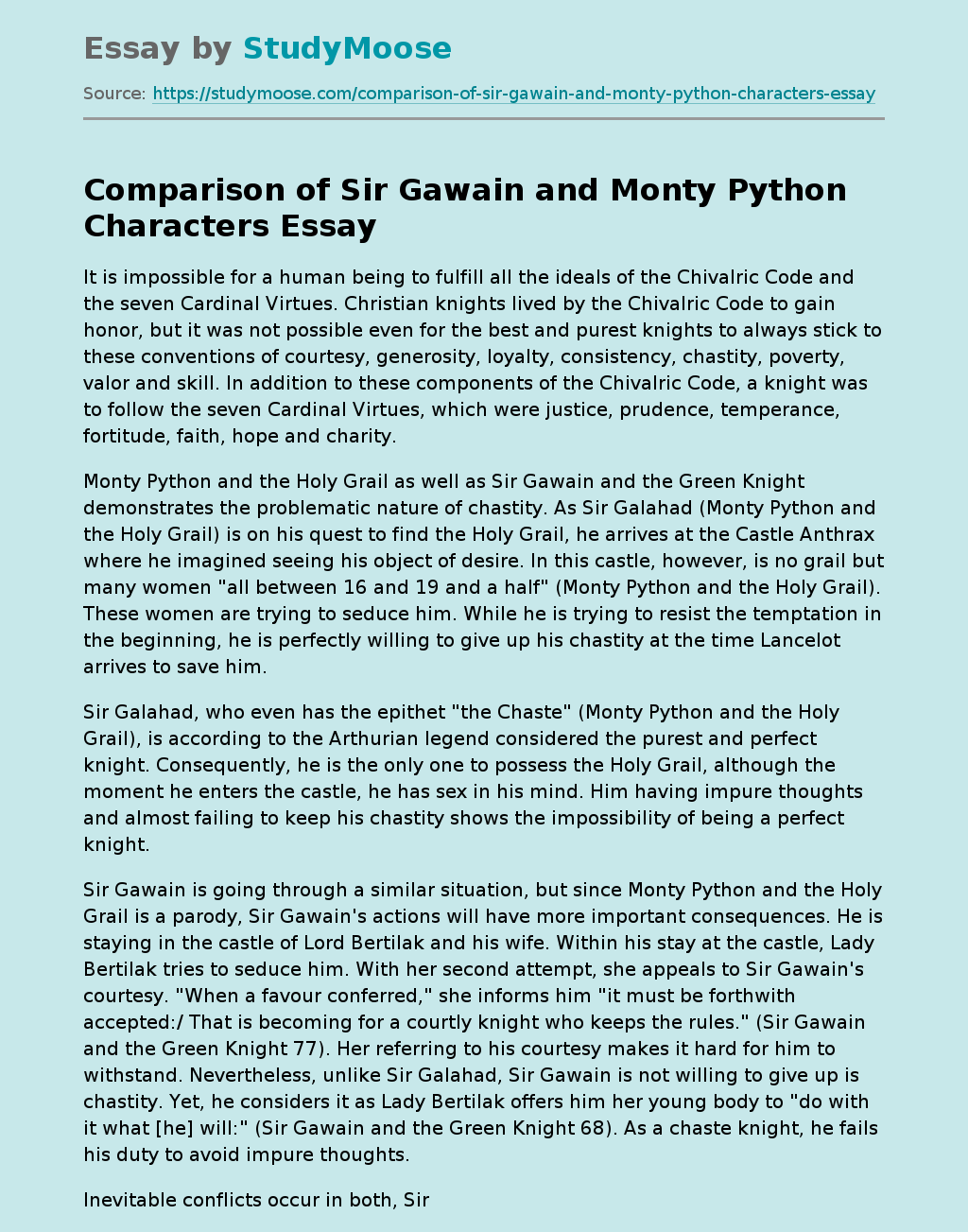