Comparison of Poems About Life Attitude

All four poems that I read are related in their purposes and goals; however, they are also very different. “Lucinda Matlock” by Edward Lee Masters, “Chicago” by Carl Sandburg, “Richard Cory” by Edwin Arlington Robinson, and “We Wear the Mask” by Paul Laurence Dunbar are all about the joys and sorrows of life. How we look at life makes life good or bad.

“Lucinda Matlock” is a story of a woman, who, by some standards, would have a life that we consider a mediocre.

Don't use plagiarized sources. Get your custom essay on
“ Comparison of Poems About Life Attitude ”
Get custom paper
NEW! smart matching with writer

However, the narrator of the poem says that it was a good life and that life can only be truly appreciated if it is taken from you.

“Chicago” by Carl Sandburg is the most closely related poems to “Lucinda Matlock”. In the poem, the people of this city are dirty, “evil”, and happy. The people are not saying to themselves, “Well, my life is horrible because this is where I live and this is my underpaying job”.

“Richard Cory” is a poem about an aristocratic man that under- appreciates life, and, as a result commits suicide. The narrator talks about how envious he/she is of Richard Cory. Only in the very end do they mention the fact that he is actually a very sad man.

This poem is a representation of the front that some people put up to hide their inner selves due to embarrassment or many other feeling of despair.

Finally, we read “We Wear the Mask” by Paul Laurence Dunbar. This is very similar to “Richard Cory” in its message. The message is again that there are some who sometimes cloister their inner selves behind a barrier of a fake personality. In the poem, Dunbar writes:

“Nay, let them only see us while/ We wear the mask/ We smile, but oh great Christ, our cries/ To Thee from tortured souls arise.”

The second part of the quotation says that they have tortured souls. They smile to hide their pain and they cry to Christ for help. All of the poems share the common theme that “life is what you make it” and that people often hide their true identity behind a false one (As shown in “Richard Cory”, “We Wear the Mask”, and “Chicago”). Though the final two poems mentioned have more in common with each other than they do with the first couple poems that were talked about in class, all of the poems are similar in their ultimate subject matter.

Comparison of Poems About Life Attitude. (2016, Jun 28). Retrieved from http://studymoose.com/comparison-of-poems-about-life-attitude-essay 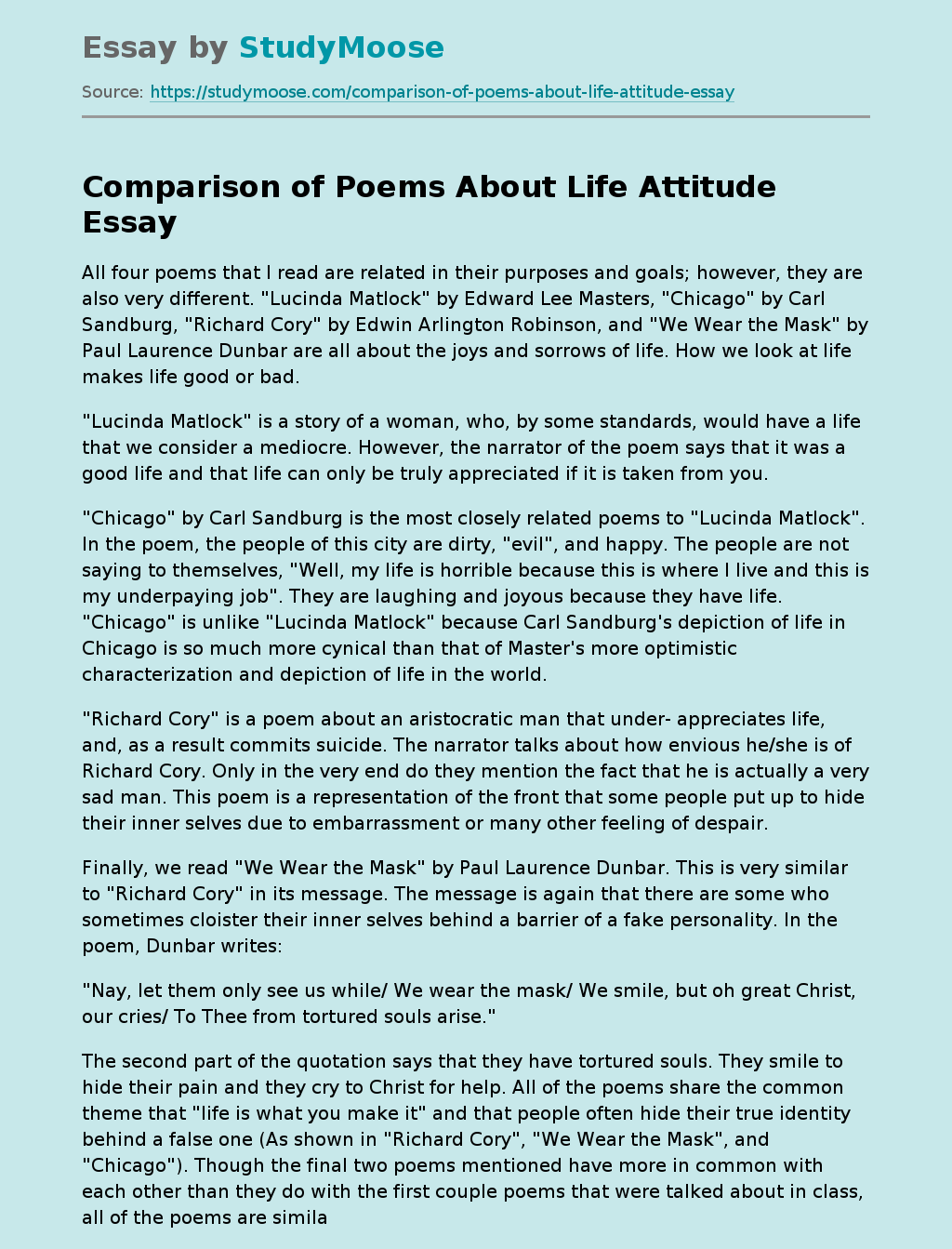