To start off with, the poem Plug In, Turn On, Look Out is warning everyone about how the machines would take over the world and teaching all of us what we should do usually to prevent them taking over and hurting us.

Turn in your highest-quality paper
Get a qualified writer to help you with
“ Comparison Between Two Poems ”
Get high-quality paper
NEW! AI matching with writer

The poem picks out all those horrible facts of machines, but on the other hand, the poem Portrait of a Machine is praising how beautiful and fantastic machines are.

Both poems has one voice in the poem, only one person is talking and their intended audience are both the world in general, although, the poem, Plug In, Turn On, Look Out also speaks directly to you whilst you are reading the poem.

Both poems have two stanzas, enjambment was used in both and the vocabulary in both poems were carefully chosen, each word stringed together into a phrase would add more detail to the image constructed in our minds. There are also quite a few differences, Plug In, Turn On, Look Out is a free verse, when Portrait of a Machine is a sonnet. In the poem, Plug In, Turn On, Look Out, all three tenses are used, to give the feeling that the machines has already started taking over the world, but it has not ended yet.

On the other hand, Portrait of a Machine only uses the present tense throughout the whole poem. For the poem, Plug In, Turn On, Look Out, a lot of techniques were used but for the poem, Portrait of a Machine, not many techniques were used. In Plug In, Turn On, Look Out, personification was used, for example. machines are on the march. It emphasises that the machines are coming to get you, by using the word march.

The poem was quite imperative as well, having the phrases, Keep your electric lawnmower securely tethered and Cut down supplies of food to your refrigerator. It is ordering you to do it immediately in order for you to stay safe. But for the other poem, Portrait of a Machine, there are only a few techniques used. Sibilant was used; the s sound was exaggerated in hiss. There was also a standard sonnet rhyming scheme to it, abbabba cdcdcd. If you put all the rhyming words from abbabba, it would create the sounds of huge machines at work with rods plunging down.

The poet in Plug In, Turn On, Look Out seems to be quite scared about machines taking over the world. But the poet in Portrait of a Machine seems sarcastic and seems to be making fun of the people who uses machines in their daily life. Both poems are written to warn the world that we are replying too much on machines and technology that it is taking over our lives and we are losing ourselves. These two poems have different ways of warning us, Plug In, Turn On, Look Out has a very explicit warning to us, telling us to be careful what they will do, but on the other hand, Portrait of a Machine has a very implicit warning to us, telling us how beautiful machines are, in the eyes of people who are living in the modern society, then reminding us about not to lose ourselves.

I had totally different emotions and reactions to the two poems. After reading Plug In, Turn On, Look Out, I was amused and I thought it was very interesting because it seemed to entertain me more than warn me, due to the fact that I know machines will not literally take over the world, on the other hand, Portrait of a Machine made me think, it was very deep that I read it over a few times, before I got the real meaning and purpose of the poem. The effectiveness of Plug In, Turn On, Look Out was not that effective but, for Portrait of a Machine, it had a strong effect and it was so heavy, that I will respond and think about the poem after reading the poem. 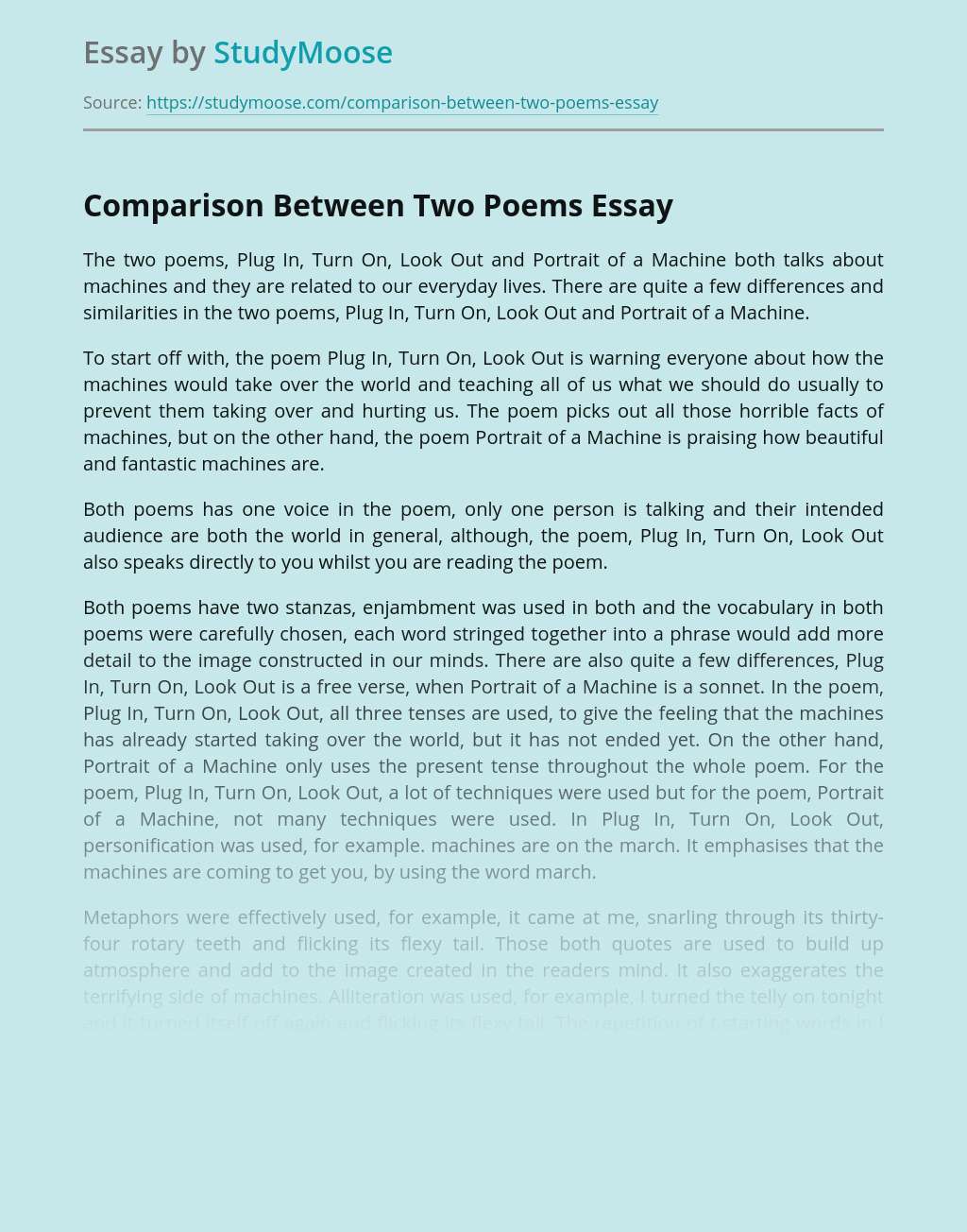 Turn in your highest-quality paper
Get a qualified writer to help you with
“ Comparison Between Two Poems ”
Get high-quality paper
Helping students since 2015
Stay Safe, Stay Original