In today’s society, it is often unclear where to draw the line between good morals and effective government. It is for this reason that many times, laws that are enacted for the “good of the people” can be in direct conflict with a person’s conscience. Due to the various struggles that the United States has faced in building a government, this topic has been a popular discussion throughout American literature. Although they did not live during the same time, American writers Henry David Thoreau and Martin Luther King, Jr.

ach wrote about how a person should not follow laws that they believe to be immoral.

Thoreau’s main concern pertained to the legal existence of slaves and slave-owners, and a century later, King spoke out against legal segregation in the South. In his “Letter from Birmingham Jail,” Martin Luther King, Jr. shares the same attitude with Henry David Thoreau’s work, “Civil Disobedience” concerning just and unjust laws; however, they each had different means of executing their beliefs.

Both men agree that if a law is unjust, it is one’s duty to break that law, and do instead what they believe to be right.

Thoreau considers that when unjust laws exist, a person has three choices of action: obey them, obey them while working to change them, or transgress them at once. He proposes, “It is not a man’s duty…to devote himself to the eradication of…even the most enormous wrong; …but it is his duty, at least, to wash his hands of it, and…not to give it practically his support.

” (Thoreau 4). Thoreau also ponders whether it is better to decide what is right and wrong by one’s own conscience. He declares, “It is not desirable to cultivate a respect for the law, so much as for the right.

The only obligation which I have a right to assume, is to do at any time what I think right. ” (Thoreau 1). King, who was a devout clergyman, places one’s moral obligations under the eyes of God. He defines a just law as “…a man-made code that squares with the…law of God. ” (King 177). King and Thoreau believe that the act of going against the law should be done in a passive manner. King explains, “Nonviolent direct action seeks to create such a crisis and foster such a tension that a community which has constantly refused to negotiate is forced to confront the issue. ” (175).

These writers also coincide that once someone has broken a law, he or she must be willing to accept the consequences, including the possible penalty of imprisonment. In fact, both men spent time in prison for their acts of civil disobedience. Thoreau was sent to jail after six years of refusing to pay his taxes, due to his opposition to both the Mexican-American War and slavery in America. King was sent to jail for leading several peaceful protests, including a boycott. However, King was imprisoned for much longer than Thoreau, who only spent one day in prison, but was unwillingly bailed out by his aunt.

In fact, it was from jail that King wrote his letter, in an effort to defend his actions in Birmingham, which he believed to be completely necessary and justifiable actions of protest. Both Thoreau and King felt that by going to prison, and dealing with the consequences of their actions, they were solidifying and therefore strengthening their protests. Thoreau and King were also of the same mind that a law must be respected regardless of whether it is just or unjust. King fears that anarchy will result if laws are not respected; Thoreau describes that rebellion will be the consequence if laws are not given respect.

King declares, “…An individual who breaks a law that conscience tells him is unjust, and willingly accepts the penalty by staying in jail in order to arouse the conscience of the community over its injustice, is in reality expressing the very highest respect for the law. ” (King 179). King states his position as one that disagrees with a law, and therefore goes against it in an effort to change it with respect to the government. Both writers agree that getting rid of the government is not the goal, but rather to change its ways.

Thoreau articulates, “…to speak practically and as a citizen…I ask for, not at once no government, but at once a better government. Let every man make known what kind of government would command his respect, and that will be one step toward obtaining it. ” (Thoreau 1). Exercising passive resistance is the basis of the title of Thoreau’s work, and King presents several examples of civil disobedience in his letter, such as the Boston Tea Party. King himself not only exercises passive resistance, but he provides the procedure to be followed for any nonviolent campaign.

With the exception of King’s added religious beliefs, Henry David Thoreau and Martin Luther King, Jr. shared the same ideas concerning civil disobedience and the ways in which one should deal with just and unjust laws, although they demonstrated their viewpoints in different ways. Both of these writers believed that any law that was in conflict with a person’s conscience should be respected, but still challenged in a passive manner. To prove this belief, both Thoreau and King practiced it themselves. 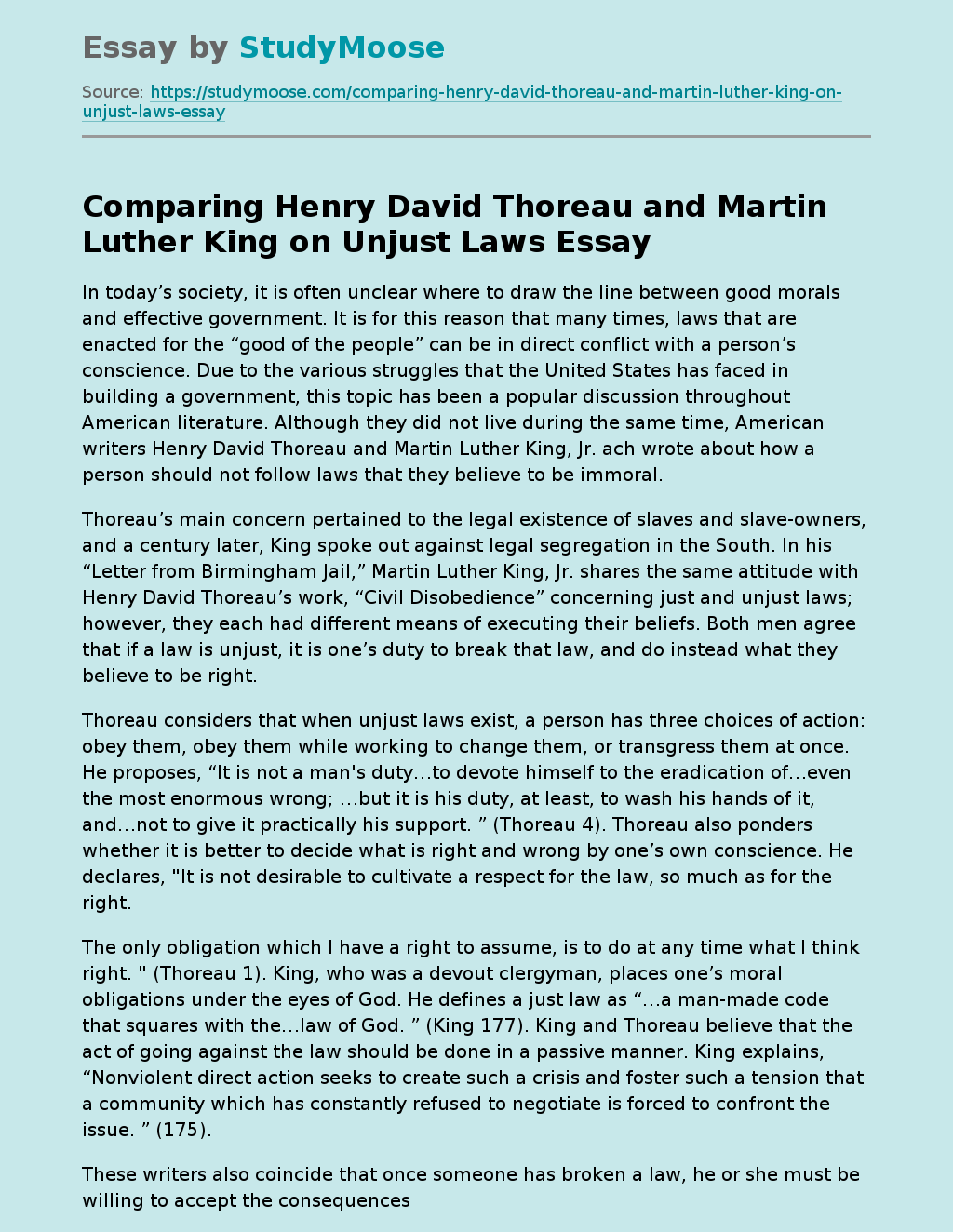