Compare and Contrast About Two Cities

Da lat and Vung Tau city, which were established early ago, have high population density and living standards. People who live in two cities have the same traditional cultures and they come from different provinces of Vietnam. Although there are several similarities between DaLat city and Vung tau city, there are many obvious differences between them as mentioned in this essay First, the climate in DaLat city is different from climate in Vung tau city.

This point proves that Dalat city climate is very cold from October to December, warm from July to September and cool around year.

In contrast, Vung Tau city climate is very intense heat in the dry season and cool in the rain season because Vungtau city climate has two specific seasons, which are rain season from May to November and dry season from December to next April. Moreover, this city has no winter season. For instant, when you stay DaLat city, you feel the weather that changes follow the four seasons in year and in a day such as spring is in the morning, summer is in the noon, autumn is in the afternoon, and winter is in the evening.

In addition, there is a great disparity in the Da lat city scenery and Vung tau city scenery.

This feature figures out that Da Lat city scenery, which has many high mountains with the green pine forests and some beautiful lakes such as Xuan Huong Lake, Than Tho Lake, Tuyen Lam Lake, is extremely poetic and romantic. Further, the mountains go up and down which surround Da lat city with the pine remains green all the year round. Unlike Da lat, Vung tau scenery is naturally beautiful with a long beach and fresh green rice fields because Vung tau has 20 kilometers of coastline with famous soft-sand beaches and calm waters. The beaches lied alternately between Lon and Nho mountains.

Seen from the Lon and Nho Mountain, Vung tau looked like the miniature map. For example, coming to Da lat city, the tourists like going to picnic in the green pine hill on the tourist area and climbing the mountain such Lang Biang mountain, Mong Mo hill, valley of love. They also enjoy the cool and fresh atmosphere in summer so that in the summer Da lat city has many the tourists to come here. On the contrary, coming to Vung tau city, the tourist like bathing in the beach and enjoying the fresh seafood. Final, the obvious difference between the two cities is activities in the daily life.

It means that Da Lat people activities in daily life take place quietly and normally the same climate in here. This city is peaceful the same countryside and people in here are friendly and close. Otherwise, Vung tau people activities in daily life take place busily and animatedly. Vehicles are always lively in the roads and people activities are always enthusiastic and busy in the factories. To illustrate, the rain season, in Dalat city, all social activities seem less than when it rains to last from this day to other day even one week so all people feel lazy to do something enthusiastically in the cold weather.

Unlike Da lat, Vung tau activities take place normally in the rain season. It rains a lot of but it stop soon and sunshine appears so that all activities happen busily. In conclusion, Da lat and Vung tau city, which has fast develop economy and high living standards, is in Vietnam country. Moreover, these cities are beautiful with natural landscapes and weather is two reasons. However, there are obvious differences such as climate, scenery, activities… in order to differentiate two particular cities..

Compare and Contrast About Two Cities. (2016, Oct 18). Retrieved from https://studymoose.com/compare-and-contrast-about-two-cities-essay 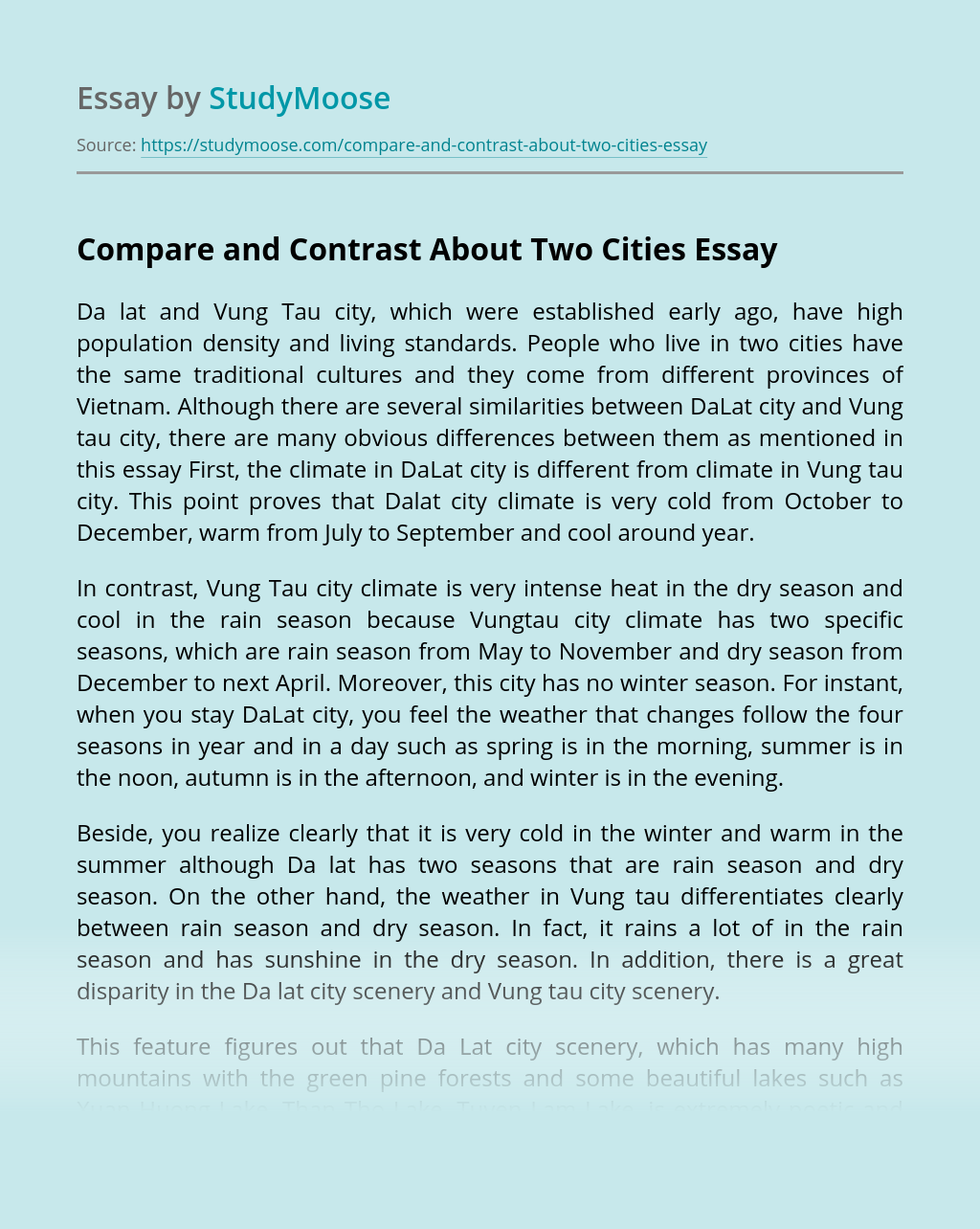 Why Summer is my Favorite Season

Rate this post Summer, the smell of fresh-cut grass wafting through the air, the sound of the ice cream truck making its way through your neighborhood, or the sound of kids screaming, laughing, and jumping into the pool on a hot summer day. This is the only season you would see these things happening, and...

Rate this post The four seasons are the way mother nature lets us know she can’t make up her mind on what food, clothes and activities she likes. Winter, spring, summer and fall, each, in their own way, affect various aspects of our lives. Specifically, Summer and Winter have extremes which determine change our life...

Rate this post The word is divided into 6 climate zones. These zones depend on several factors. The first is temperature; if a country lies near the equator it tends to be hot; but if it’s near the poles it tends to be colder. A country can also have a cold climate if it’s very...

Experience of living in cold climate

Rate this post “It is too difficult to get used to live in snowy, and cold place”. I have come from a place where it’s hard to hide from the sun heat. Too difficult to find a shadow to run from the sunshine. Also, the sweat all over my body which feels like drowning in...

Rate this post INTRODUCTION The negative effects of global warming are slowly ruining the environment we live in. In a few decades, it is possible our Earth will be very uncomfortable to live on. I have researched the issues of global warming and have found out as much as I possibly can in order to...

Rate this post Abstract Climate change continues to be an issue that generates a lot of discussion globally. With various initiatives, protocols and declaration being set out to avert the consequences of an unchecked environment usage, the factors that contribute to knowledge and awareness of climate change will present an area of study to academicians....

Rate this post Climate change occurs when changes in Earth’s climate system result in new weather patterns that last for at least a few decades. Climate Change is affecting the food and water availability which affect restaurants and their carbon footprint. Carbon footprint the amount of greenhouse gas emissions that a living being, person or...

Rate this post Weather is the state of the atmosphere at a particular time and place with regard to temperature, moisture, air pressure, precipitation, etc. Bio organisms need to adapt with the changing atmospheric conditions. It is therefore important to know the atmospheric condition for different applications. The interest is to design of Arduino with...