The changes in our society according to our actions, can lead to our own self-annihilation. In the novel, “Oliver Twist,” the author, Charles Dickens, tells us that the government has taken wrong actions towards poverty and crime in his time, but from then on, through the use of characters in Dickens’ novel, people shine more light at this topic of corruption. Similarly, in the novel, “Brave New World,” the author Aldous Huxley, also tells us that the future government has taken wrong actions by choosing to rely on technology to solve all their problems.

Don't use plagiarized sources. Get your custom essay on
“ Comparative Essay on Oliver Twist and Brave New World ”
Get custom paper
NEW! smart matching with writer

These authors later on tell us that there are corrupted thoughts being supplied to a person’s mind, by either the wrong hands in the society (Oliver Twist), or by the use of technology in the future (Brave New World). Both authors, with the use of their respective novels, affect social change. Charles Dickens uses the effects of workhouses on orphans to portray the real orphan life, while Aldous Huxley portrays the present way of over-using technology, and its negative effects on the future society.

Initially, the government thought that workhouses will be hospitality for orphans, and a place to earn money. Workhouses are where orphans are given sevenpence-halfpenny per week in unhealthy working conditions. Dickens tells us that the government thought the workhouses will be perfect for orphans, but really, their living and working conditions were a hell. Dickens gives us a sarcastic description of the conditions in workhouses. The Society in Dickens’ time was really harsh to orphans, and with this novel, the Society began to have nobler views towards orphans.

Additionally, orphans, being a lower class, are treated like dirt by the workhouse owners. Orphans are starved with the given payment, without a right amount of food, they become ill, and like Oliver, are harshly beaten if they ask for more food. As Dickens presented these treatments that are given to orphans to the society, his influence made conditions in the workhouses improve in the late nineteenth century, and social-welfare services and the social-security system supplanted workhouses altogether in the first half of the 20th century.

Today, the society becomes emotionally in touch with orphans when they hear about the life of the poor. Like Oliver Twist, Brave New World uses its own way to advance or ruin the human civilization. To commence, the society in Brave New World is maintained through technological interventions, which start before birth and last until death. In machines, children are decanted by the Bokanovsky’s Process, making ninety-six human beings, who use these machines to maintain their bodies throughout life.

Huxley warns us, that machines will be the way that children will come into the world, thus eliminating God. People nowadays, think that machines provide advances toward the society, and the social change with technology that is happening right now, will be affected by the different views of the society towards technology. As a result, if you let machines meddle with the way humans are born, you are asking for trouble. Every ninety-six human beings in the lower classes, with the same embryo develop with the same characteristics, and some are cloned.

Humans come into the world without a family in Brave New World, thus they are without true love given by a family, and have no uniqueness, a loss of identity and values. Recently, there has been a sheep and a pig cloned by scientists, and humans can be next! Huxley tells us that if we keep using technology the way we are, there will be a life without God, his creation of humanity, which is the uniqueness of everyone, will be destroyed, and the change in the society with the use of technology to make our lives easier, does come to a halt with this novel.

Just like the government in the past thought the workhouses to be an advantage for orphans, and the government in “Brave New World” thinks that by controlling reproduction through technological and medical intervention, and thus making everyone’s identity the same, it is making everyone equal, but really, it is creating a loss of dignity, morals, values, and emotions-in short, a loss of humanity.

To conclude, Charles Dickens gives us an example of orphan life, and Aldous Huxley brings up the topic of the use of technology biologically, which are going to affect the society by giving a little hint of their effects. Another aspect that is protested in Dickens’ novel is crime, which is taught to orphans when they fall in the wrong hands, while Huxley’s novel illustrates the insight to how humans will be controlled with this technology. To present another aspect, Oliver, being naive, falls into the wrong hands of the crime area in the community, where there is no pity for a child.

Oliver meets the corrupt society, where he accidentally joins Fagin’s gang of thieves. Dickens’ time did not only have crime, it still exists today as a big issue in society, although there is not much attention going towards it, and it could develop to be something massive. Dickens’ novel brings this forward for our community to pay more attention, and with an aspect like this which has not been took care of, it is going to change society in the means of corruption.

As its effect, by being exposed to the negative part of the society through influences from negative surroundings, an innocent like Oliver, gets involved in crime. By observing Fagin’s apprentice, Oliver learns how to steal a handkerchief from Fagin’s pocket. Dickens tells the society that there are orphans out there being influenced by people like Fagin to become ill natured, this protest brings everyone’s attention together, and from Dickens’ day on, although not as much, but the changes in society have involved a decrease in this kind of corruption.

Society nowadays would have been overflowing with corruption, but by the affects of “Oliver Twist,” people have decided to put an end to it, which, in the future might lead to a calm society. Like Fagin teaches his apprentices to be negative in society, In Brave New World, Hypnopi?? dia is used to teach the society whatever it wants it to think of. In detail, Machines use Hypnopi?? dia to make the society stable and with utmost happiness, thus making it act like “robots,” under the command of the world controller. Hypnopi??

dia teaches the society to never be alone, and to do anything to achieve happiness, like take two or three half-gramme tablets of “Soma” to calm your anger, to reconcile you to your enemies, to make you patient and long-suffering. They are controlled by the world controller, telling them what to do. We should use science in an appropriate way, from which it cannot use us, and Huxley also tells us that the way drugs are being used now, which is to make yourself feel better, that is how it will be like in the future, where you will be relying on drugs to make you better.

Considering this, others have also been thinking, that there are other ways to make life easier, not just using a machine to fit all the information in your brain, and not using a drug all the time. At long last, the affects of teachings humans to use a drug all the time through Hypnopi?? dia, has resulted in death. With Hypnopi?? dia, all the citizens are taught to keep using Soma, all they think is that a gramme of Soma is better than anything, and Linda dies after the excessive use of drugs. This results in the loss of feelings, and one’s own thoughts about something.

The problems that the world is facing right now with the amount of drug use are terrible; imagine their affects after using them all the time! We use these drugs to make us feel better, but Huxley opens our eyes to their inevitable effects, which we seem to be a stranger to. Drugs are a major issue in the world today, if this novel gets to the societies where there is an excessive use of drugs, it will change their whole view, and tell them that their society could result in with the effects of drugs in Brave New World.

Some things people are taught in these novels have results that are negative, like in Oliver Twist; Oliver is influenced by Fagin, and is taught to steal, while in Brave New World, Hypnopi?? dia teaches the society the things that will result in its downfall. With crime and corruption, the society in Oliver Twist is portrayed negatively, whereas with the use of science and technology, Huxley says that the society in Brave New World thinks that it is “positive.

” You ought to believe whatever you are taught, and nothing else. To conclude, Ultimately, it is like the society of Oliver Twist, that the society in Brave New World wants to improve, and will do anything to get there. Both of these novels affect the events that are happening in the world right now. The society in Brave New World blinds its citizens to think that machines are the answer to all problems, but really problems are the result of the use of machines.

This “utopian” society tries to erase anger, hatred, sadness, and poverty, all that “Oliver Twist” consists of. Governments in both novels take steps on their own decisions, not realizing the result of each decision. Charles Dickens hoped that through his novel, there would be a positive change in the society, as everyone will be touched by the life of an orphan. It is hard to believe that our world would become the “Brave New World” in the future, and thus it may seem like it never could.

Yet, as we strive towards the growth of technology and improvement of our daily living we come closer to closing the gap between the freedom of emotions, self understanding, and of speech and the devastation of a dystopia. Thus, Charles Dickens’ novel depicts a society which is based on individualism (the respect towards one’s identity, like Oliver’s identity, which is ‘robbed’ by others), and Aldous Huxley’s novel depicts a society of collectivism (the will of making the society prosper). Both of these novels tell us to improve the changes in our society by taking actions according to their results.

Essay about Cloning
Cite this page 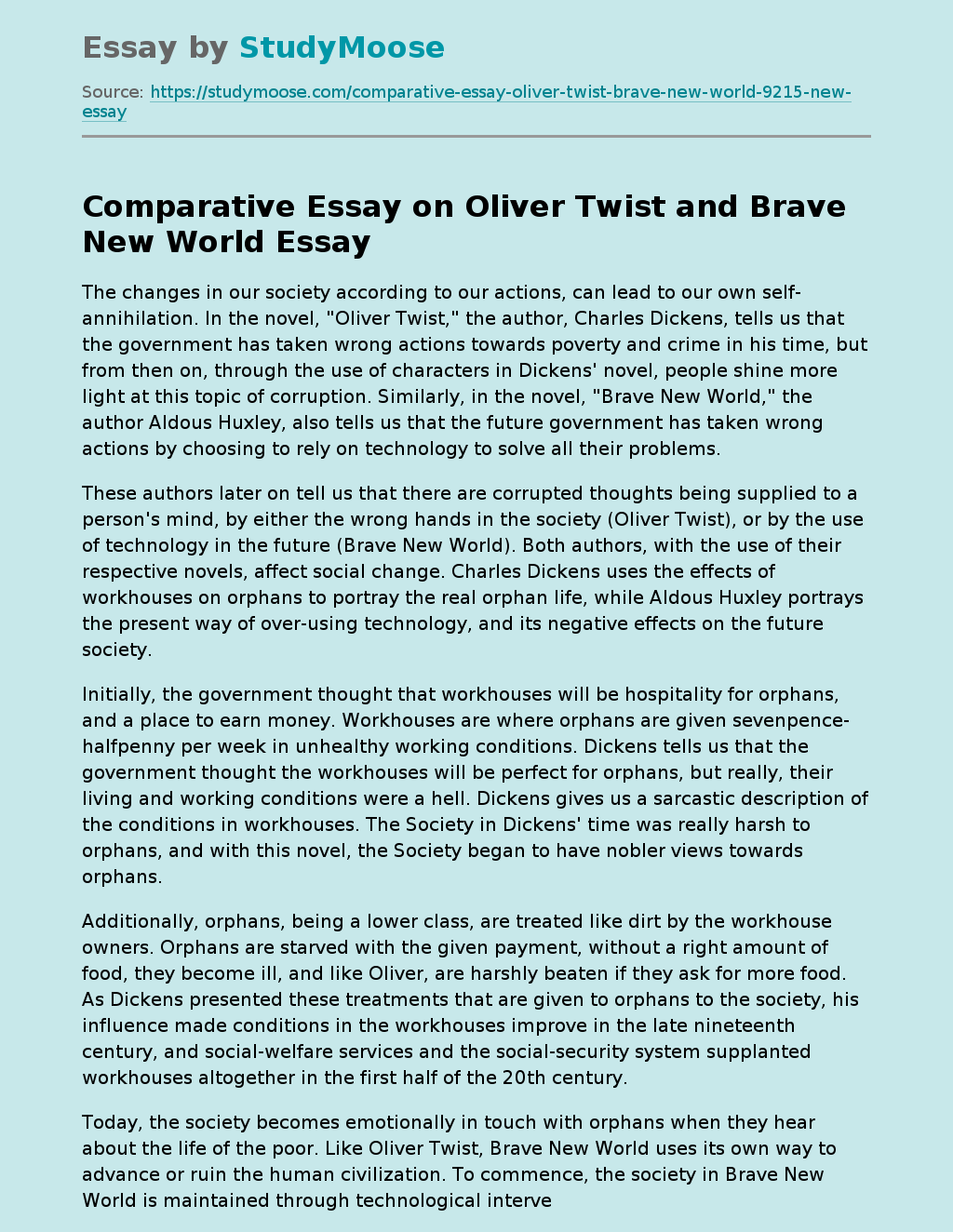