Stereotyping can be defined as sweeping generalizations about affiliates of a certain gender, nationality, religion, race, or other group. Social stereotyping has been a worldwide issue for many years. More specifically, stereotypical assertions, based on both gender and race, have been a common theme throughout many 20th and 21st century films. Both Crash, directed by Paul Haggis in 2004, and Girlfight directed by Karyn Kusama in 2000, address the issue of stereotyping in their own unique way.

Girlfight does this by placing a female in the spotlight of a sport that is predominantly dominated by males, whereas, Crash confronts our problem with racial stereotypes and racism, and the need to counter them, by focusing on the “crash” humans experience by encountering people that they actually are already linked to.

Turn in your highest-quality paper
Get a qualified writer to help you with
“ Comparative Analysis of Two Films ”
Get high-quality paper
NEW! AI matching with writer

Throughout the film Girlfight, the crowd may have been against Diana, but her determination allowed her to fight off skeptics outside the ring and her opponents in the ring. Crash is a movie that brings out bigotry and racial stereotypes.

While one story revolves around a gender debate, the other approaches the argument from the aspect of race and ultimately both combat the greater social issue of stereotyping. The film Girlfight depicts the struggle of Diana Guzman, a high school girl, and how she overcomes gender barriers to dominate the boxing arena. Her mother passed away when she was young, and she lives with her father and younger brother, Tiny. They reside in the projects of New York City, a tougher area where the ability to defend yourself is basically a prerequisite.

Her father forces Tiny to train at the local gym to become better suited to defend himself and that is where Diana is introduced to the sport of boxing. Setting is a key aspect of the film and director Karyn Kusama’s choice of realistic venues for each and every scene help create a documentary-like atmosphere. One scene that illustrates this quality is when Diana and Adrian learn that they will both be fighting each other in the final bout. The scene takes place inside the manager of the ring’s office; a small but well organized office.

The camera pans from character to character as they discuss Diana’s next fight and the viewer is placed in the back corner of the office space. A key detail to be noticed is that the door is open and one can see that boxers are still training in the background. This gives the audience the idea that what they are viewing is very real, almost like a documentary, and Kusama’s film work adds to that with a picture that is both grainy and misty. The scene is also full of dialogue, which is a common attribute of any documentary. It seems as if the scene would have occurred even if the camera had not been rolling film.

The realistic aspect correlates back to the underlying premise of the movie, gender stereotyping. At the time, female boxers were a rarity and Diana was an exception not only because of her gender but also because of her skill. The boxers at this gym are all male except for Diana who happens to be the main character in the film. This creates an immediate gender barrier the second that Diana steps in the gym merely because she isn’t of the norm. The film Crash attempts to tackle the issue of racial stereotyping though the stories of several characters who all turn out to be connected in some way, shape, or form.

Anthony and Peter are partners in crime who hijack cars for a chop shop. Anthony believes that society is unfairly biased against blacks, and at one point in the film he justifies his actions by claiming he would never hurt another black person. Rick Cabot, district attorney of Los Angeles, and his wife Jean are two other main characters throughout the film. One scene that reinforces the use of stereotyping is when Anthony and Peter stroll a Los Angeles shopping strip. As they walk along, Anthony explains to Peter how whites are so quick to judge blacks at night.

The dialogue throughout the scene is especially important because Anthony quickly changes from complaining about racial tendencies around him to hiding behind a handgun as both he and his friend hijacks a car. The audience sides with Anthony, as he begins his rant, but out of the blue, the two men pull a gun on an innocent couple and the audience is left in shock. Anthony states, “You couldn’t find a whiter, safer or better-lit part of this city right now, but yet this white woman sees two black guys who look like UCLA students strolling down the sidewalk, and her reaction is blind fear” (Crash).

This statement draws light on the fact that we as humans tend to jump to conclusions often too quickly. Anthony and Peter had done nothing out of the ordinary but the town happened to be predominantly dominated by whites and that set off a red flag in Jean’s mind. Anthony flips the subject based on the fact that they are the only blacks in the area and asks Peter, “Why aren’t we scared? ” Peter responds, “Cause we got guns? ” and both men proceed to pull out their weapons and hijack the Cabot’s vehicle (Crash). This scene is greatly enhanced by the use of sound.

As both of the couples stroll down the boulevard, one can hear a peaceful Christmas carol in the background, but as the men approach the Cabots, the music increases in volume and changes to a more upbeat, edgy track. The film does this in order to create tension between both sets of characters; it changes the norm and keeps the audience anxious. To reinforce this, the sound increases once more as Anthony and Peter peel out of the street with the stolen car creating a definitive point in the scene. By transitioning from calm to chaos, Haggis demonstrates how a simple misinterpretation, a stereotype, could pay dividends in the long run.

Jean Cabot had suspected something was not right as soon as she locked eyes with Anthony. The fact that Anthony gave a rather thought-provoking talk on racial tendencies shows that stereotyping does not go unnoticed. An act as simple as interlocking arms with your husband as you pass two young, African American teenagers may seem like an act of safety to you but to the teenagers it is offensive. This also proves that this is not a one-sided debate. Both parties are involved and equally held responsible for their criticisms. In “Becoming Members of Society: Learning the Social Meaning of Gender,” Aaron H.

Devor discusses the distinction between gender and sexuality. Gender is typically based on anatomical differences between men and women, but does not necessarily match with them. In Diana’s case, she is a female yet she demonstrates masculine tendencies through her animosity and fury in the boxing arena. According to Devor, Diana fails to follow “the natural role” of her sexuality (Devor 160). Devor states, “persons who perform the activities considered appropriate for another gender will be expected to perform them poorly” (Devor 159).

He point is valid because there are always cases when a male or a female may not fit the norm and fight off a society that is so fixated on masculinity versus femininity. This statement connects with the film Girlfight, in which Diana Guzman distinguishes herself by becoming a boxer, a sport dominated by males. Devor states that even if the athlete does succeed, it is a “reward with ridicule or scorn for blurring the gender dividing line” (Devor 159). The film Girlfight somewhat argues this statement because Diana was cheered as she finished her final bout against Adrian. Adrian was obviously the favored fighter, mainly due the act that he was a male, yet Diana pulled off the victory.

The fact is that gender is socially and culturally determined; it is not biologically determined. At the time, boxing gurus failed to give credit to Diana by being an underdog and decided to instead critique and stereotype her based on her sex. Today more and more women have become boxers but there are still those that frown upon their presence in the ring. Even though people have become more tolerant, there are still some who are not willing to except things out of the norm, which is why society has not gained the balance it needs and social stereotyping exists.

Gender stereotyping is a very serious issue in today’s society, but another dilemma just as grim is that of racial stereotyping. Larry Aubry’s Los Angeles Sentinel article titled, “Undoing Racism in American Cities,” argues how racism is still very much with us and is still a barrier to the realization of the American dream in the nation’s cities and towns. His main point is that in order to “undo racism” one must “move from being a part of the problem to becoming a part of the solution” (Aubry, par. 3).

Throughout the film Crash, the main characters are given various opportunities to combat racism but instead act on poor judgment by stereotyping. The fact is that stereotyping never leads to a proper outcome. A proper outcome may not be what either party had intended but most of the time an ethical outcome is best. In Anthony’s case, he fumed on how whites were racist yet he became part of the problem by doing exactly what Jean Cabot had foreseen him execute. Anthony stereotyped against himself and further worsened the problem. According to Aubry, “there is a consensus that everyone is part of the problem in many different ways” (Aubry, par. ).

Most people place the blame on others when in fact they escalate the argument. Stereotyping has set societies back time and time again and until society is guided by the fairness of its ideas, its politics, and its culture and not by the fairness of one another’s skin or gender, progress cannot be made. Girlfight attacks the issue from the gender side while Crash from the racial side. Stereotyping is vague in nature but both films key in on these issues through their storyline and cinematic techniques. Girlfight did this through a realistic portrayal of the life of a young female boxer and her struggles.

Crash decided to create a segmented story in which characters interact through their abuse of stereotyping. If Anthony and Peter had decided not to go through with the car hijacking, both them and the Cabots would have been closer to the realization that they were in fact, out of line. In Diana’s case, the public is against her, even her father is against her, yet she knows she can fend off the skeptics. Social stereotyping is pervasive and without both parties grasping that fact, both racist and gender stereotyping will continue to exist. 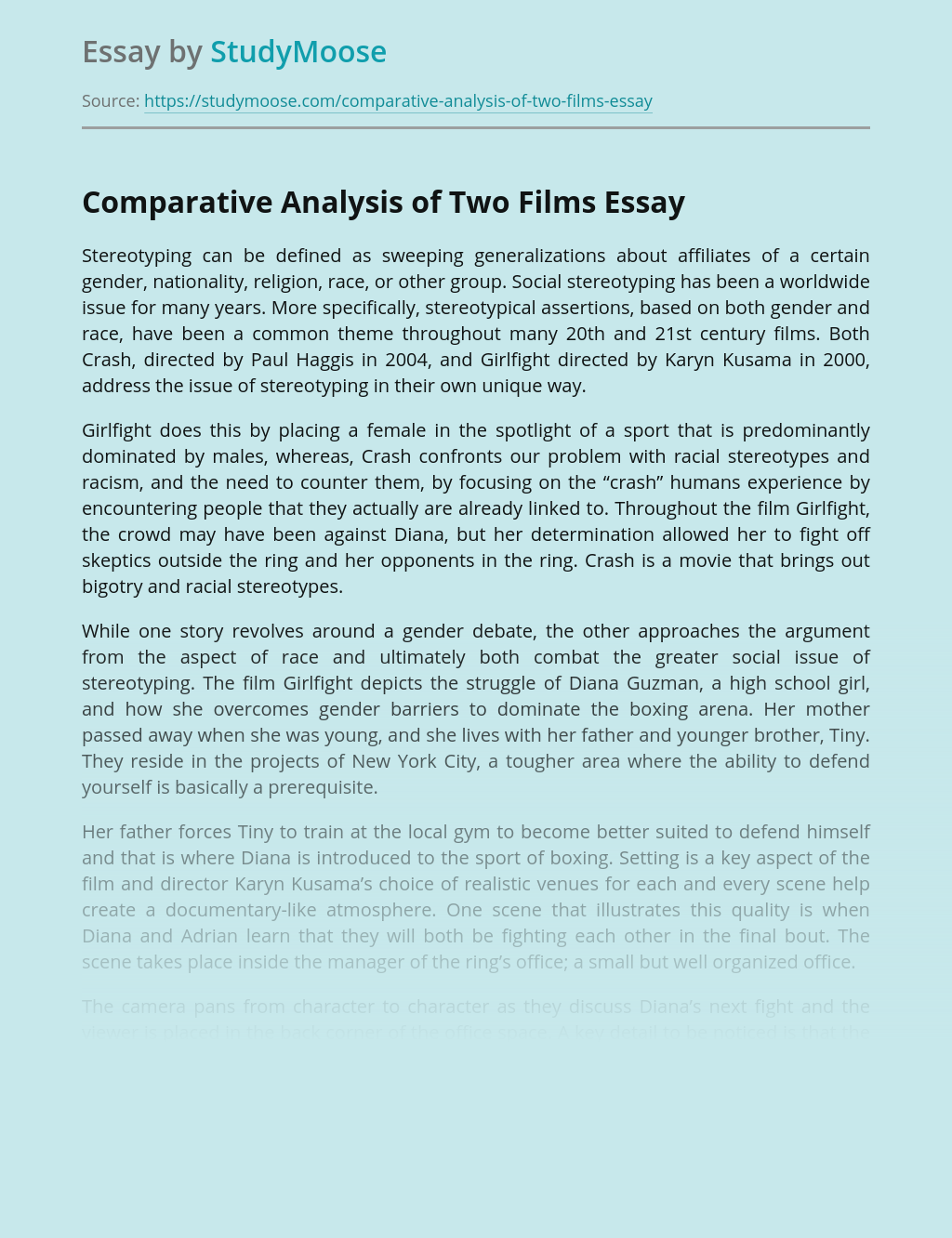 Turn in your highest-quality paper
Get a qualified writer to help you with
“ Comparative Analysis of Two Films ”
Get high-quality paper
Helping students since 2015
Stay Safe, Stay Original