Riverside County is a vast geographical area in Southern California with a diverse population. It represents a melding area of different cultures, ideals and median income, resulting in a community full of variety.

Geographically, Riverside County covers 7200 sq. stretches eastward from the Orange County border of Southern California to the border of Arizona. There is a variety of climate within the county, as it includes a section of the Cleveland National Forest including Mount San Jacinto Mountains with a peak of 10,800’ and the eastern portion of the county is made up of the arid Mojave and Colorado deserts.

Get a verified writer to help you with Community Health Assessment

There are over 54,000 people in the county enrolled in Low Income Health Plans but over 15% of the population, 620,000 people are uninsured. The county developed healthcare program for those individuals that do not qualify for Medi-Cal has 25,000 enrollees. In 2013 there were 33 reported non-business related bankruptcies filed, with a national average of 25% citing medical expenses directly as cause. Home sales peaked in 2008 in both median price and number of home sales. Following the recession, sale prices fell but has steadily risen since the end of 2012, nearing the early high numbers.

Several types of crime present problems for the community. In 2005 there were 39 murders, 115 rapes, 416 robberies, 1577 assaults, 3829 burglaries, 8215 thefts and 3910 auto-thefts. Over 15,000 people are incarcerated in Riverside County. (Citydata)There is significant drug problems in the county increasing crime and resulting in family disruption. The manufacturing of methamphetamines plagues the area especially in the rural areas and desert regions, which make it easier to perform unnoticed. Drug related crime is common in the inner city areas of the county including Riverside City, Jurupa Valley, Banning, Moreno valley and Perris. Air quality presents the primary environmental hazard due to smog and other pollutants that often exceed the state averages. Ozone 1 and 8 hour exposure, PM 2.5, PM 10, Carbon Monoxide and Nitrogen Oxide levels all exceed the US average significantly. In 2005, Riverside County had the second highest levels of PM 2.5 and Ozone 8 hour exposure in the state of California.

Other environmental hazards include heat exposure in the arid regions during summer months and the poisonous plants found in the region. Poison Oak, Oleander, Stinging Nettles, Jimson Weed and mushrooms are all poisonous plants identified in Riverside County. (Citydata) Vectors contributing to possible disease transmission include ticks, fleas, rats and squirrels. Plague has been identified in isolated squirrels, Hanta virus has been confirmed in mice and rats. The county does battle a considerable West Nile Virus risk with mosquito larva populations in stagnant water sources. (Vector) 2011 had 30,611 live births, with 2.9% late or no prenatal care in Riverside County. (CDPH) Birth rates have remained steady over the last ten years averaging 10-12 per 1000 persons annually. Deaths have followed a slight decrease in tend over the last ten years, as have infant deaths. Population growth has grown sharply over the last ten years, almost doubling the state average. (Citydata) Disaster Assessment Tool

Because of the population makeup of Riverside County, with near half of Hispanic descent and many having Spanish as their primary language, there is a high likelihood that disaster response in this community will require a large Spanish speaking component. Another group that will require special planning for disaster response is the disabled. Riverside County has over 20,000 sensory disabled individuals between the ages of 21-64, 39,000 mentally disabled in the same age group and 55,000 physically disabled also in this age group. Because of the large immigrant population and the large number of imprisoned or jailed individuals, there is a higher risk for TB transmission which could affect persons staying at shelters in close proximity to one another during a disaster. Riverside County has a robust Emergency Response Plan which is detailed in the two part document found on the Riverside County Fire Department webpage.

The arid desert regions present flash flood risks when sudden rainstorms deliver water levels above that which the soil can absorb. Because of the overall arid environment, wildfires are a seasonal risk and have plagued the county considerable in recent years. The county is dissected by the San Andreas fault line, resulting in a 4711% rate of earthquakes over the US average. Natural disasters over the last 60 years include 22 fires, 15 floods and 7 severe storms. (Geology) Many of the rural areas of the county are adjacent to areas of denser population, and house communities based around having horses and other livestock. Disaster management in these areas will require additional resources and cooperation to facilitate moving personal animals, including horses, goats and other medium size livestock, to safe areas. These areas, usually possessing a strong cohesiveness, will likely work well together in such situations. Significant preparations have been made for notification of disaster information, utilizing state level disaster comms down to the local HAM radio operators, as well as satellite communications and personal cell phone notifications. Cultural Assessment Tool

The majority immigrants come from Mexico at 66%. Just under half of the population identify with a specific religion at 43%, and by far the majority report as Catholic at 66%. Additionally 5% associate as Mormons, leaving 29% as members of all other religious sects and denominations. In all of California, Latinas overwhelmingly make up the group of mothers seeking late prenatal care, with white and blacks following. In 2002 this number was 41,000 for Latinas, 15,000 for whites and 5,100 for blacks. Riverside County has a considerable Lesbian, Gay, Bisexual, Pansexual and Transgender population at 70,747 persons. By far the most dense makeup of this group is in Palm Springs where the LGBPT population is estimated at 40% of the cities entire makeup.

Get a verified writer to help you with Community Health Assessment 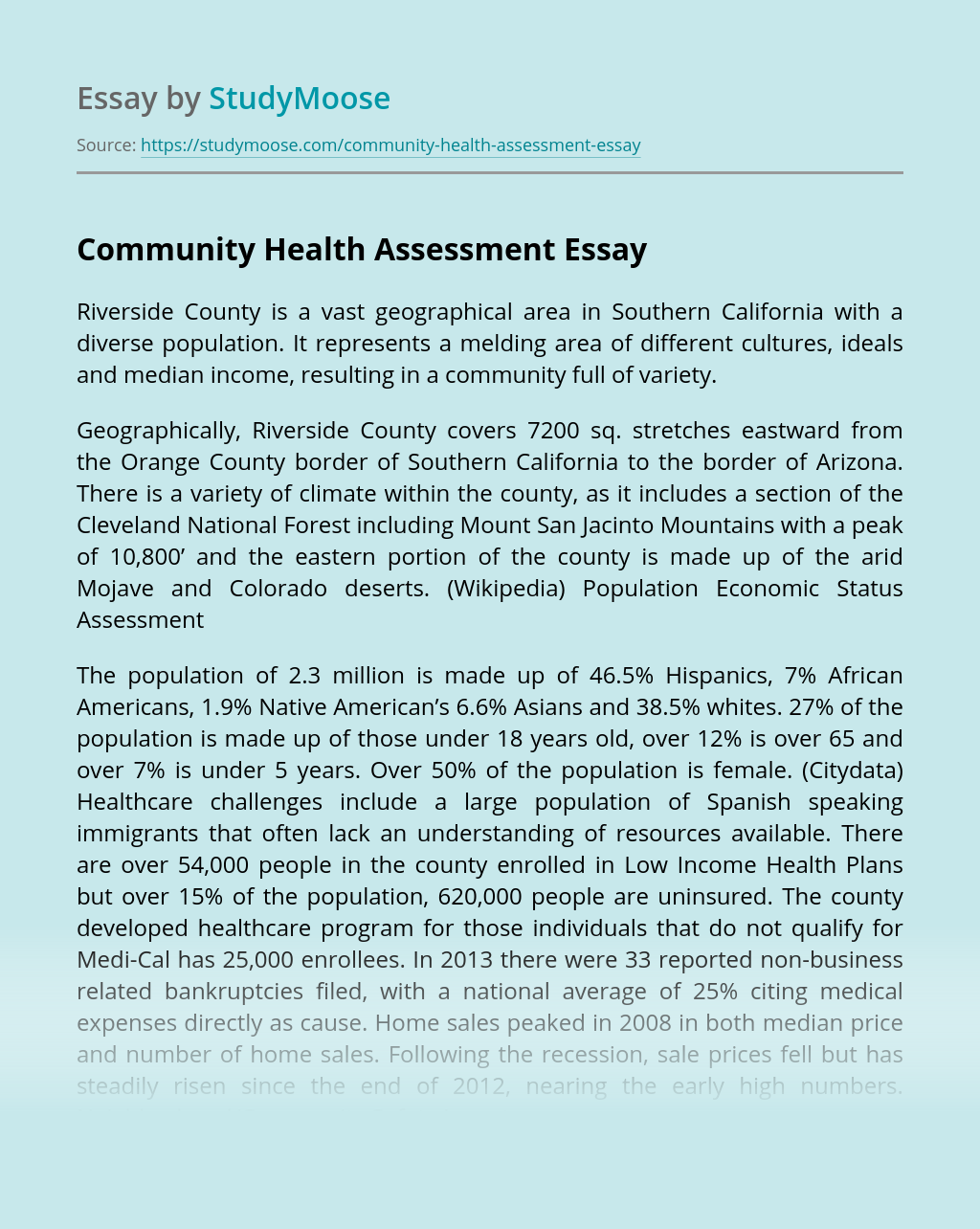 Event Leveraging and Social LegacyThere are differences between social legacy and leveraging of events. Legacy is placing the event and the components at the centre, whereas leveraging emphasizes the strategic goals of the opportunity, as well as the relationships with event-related resources to further partnerships. Leveraging allows the opportunity for the event to go beyond...

Get Essay
Why I Want to Become a Social Worker

Ever since I was a young boy I have been interested in helping people who have been less fortunate in life. Living in a area which is affected by poverty, drugs, high crime rates and bad education has motivated me to become a social worker so that I may help the community in improving on...

Models of practices that underpin equality

1.1- Explain models of practices that underpin equality, diversity and inclusion in own area of responsibility? My role as a senior care assistant requires me to support individuals from a diverse range of backgrounds and cultures. At all times, I am expected to uphold and promote equitable practice and offer equality of opportunity while taking...

In this assignment I will be discussing how my own personal value base impacts on Social Care Values and goals of my agency. I will also discuss how I have looked at anti-discriminatory practice, what values are involved and how I promote this in my own workplace. I will be identifying legislation and how this...

What is a normal person? Is it a man playing basketball with his friends in a park? Is it a woman riding horses through a grassy field? Or is it the double amputee that wears expensive sunglasses on a summer day? These images have all been depicted in the media, but the latter is not...

Euthanasia should be legalised. Agree or Disagree?

Euthanasia is inducing a painless death, by agreement and with compassion, to ease suffering. There are also four different kind of euthanasia; active, passive, voluntary and involuntary. Active euthanasia means carrying out some action to help someone to die, whereas passive euthanasia is to not carry out actions which would prolong life. Thus with regards...

"The Third Level","The Tiger King" and "Journey to the End of the Earth"

The first chapter is “The Third Level” by Jack Finney. It is a fictional story which can help broaden students’ imagination and raise their curiosity. It teaches a lesson on making the most of opportunities and never passing up a chance available; to make the most of now, the present. The second chapter, “The Tiger...