Commentary on London and Jerusalem by William Blake

The poetry of William Blake is well known for its metaphysical language and profound symbolism. In his two poems, entitled “London” and “Jerusalem” his use of these techniques, alongside many others, is crucial in his portrayal of the corruptive tendencies of man and his perspective on religion and England during the Industrial Revolution. Throughout these poems Blake reveals his strong dislike for the Industrial Revolution and its effect on London, expressed particularly in his poem “London”.

His poem “Jerusalem” focuses very much so on the natural beauty of England and religion in England.

Don't use plagiarized sources. Get your custom essay on
“ Commentary on London and Jerusalem by William Blake ”
Get custom paper
NEW! smart matching with writer

Blake, much like many Romantic poets, bases his writings on emotion rather than intellect. This is evident throughout these poems as Blake appeals to the senses and stirs readers to question their resolve with regards to England and its natural beauty. The poem “London” by William Blake begins with a cynical portrayal of the authority figures during the Romantic era, these being the church and the King.

This is evident in Blake’s use of the word “chart’d” which implies that the “streets” and “Thames” are owned by the state, exposing the oppressive nature of capitalism in England during this era, this also proposes that nature is controlled by the wealthy.

A Marxist reading of this shows the relationship between the Church or King and the land over which they rule, portraying the capital power as the bourgeoisie and their land and people on it as the proletariat.

Blake continues to communicate to the reader the effect of this oppression in the line, “Marks of weakness, marks of woe.

” This depicts the sadness and helplessness of the people of London. The poem is dark and gothic which is evident in Blake’s use of the words, “manacles”, “blights” and “plagues”. The use of this language aids in his depiction of a corrupt society. The beat of the poem is repetitive; this also emphasizes the constant pressures placed upon society.

Throughout the next two stanzas there is a strong sense of discontent and subjugation shown in the line, “The mind-forg’d manacles I hear. ” This accentuates the churches and or the king’s control over the minds of man, once again exploiting the corruptive nature that is brought about by authority and power. The values of the Christian church are challenged as Blake exposes the many flaws of the church and its corruptive tendencies.

As a contemporary reader it is evident still to this day that England, the mother country, is still ever-changing and very much so industrialized, as in Blake’s era. The church is a symbol for salvation, hope and refuge though Blake presents the church as corrupt, oppressive and controlling; this challenges the values of many contemporary readers and those of Blake’s era. Evident in the line, “Every black’ning Church appalls;”. This line also portrays the church as not completely corrupt, rather, slowly “black’ning” or becoming corrupt.

In the last stanza Blake proposes that marriage is an end to freedom as shown in, “And the blights with plagues the Marriage hearse”. Marriage, commonly takes place in a church, again this is associated with the controlling and oppressive nature of the church during the Romantic period. The use of archaic language in this poem adds to its gothic nature and aids in creating a short and sharp beat throughout the poem, the use of the “ABCB” rhyming pattern is simplistic and repetitive creating an atmosphere of continuity.

In Blake’s poem entitled “Jerusalem” the persona questions the theory that Jesus was once in England as a child this is supported by the first stanza, “And did those feet in ancient time Walk upon England’s mountains green? And was the holy Lamb Of God On England’s pleasant pastures seen? ” Blake utilizes a somber tone throughout the poem as he is discussing his own country in a seemingly patriotic manner. The poem is full of metaphor which aids in Blake’s representation of the church as an ever changing authority.

In the line, “Among these dark satanic mills” Blake could be referring to the Industrial revolution or the universities and churches during the Romantic period which would repress the minds of society and corrupt. Throughout the poem Blake makes constant reference to England’s beauty, this contrasts to the “dark satanic mills”, the “bow of burning gold” and the “chariot of fire” which is all manmade, Blake is juxtaposing the natural beauty of England with its industrial capabilities.

In the third and fourth stanza Blake uses numerous metaphors to emphasize his fight against the clergy this is evident in the lines, “Bring me my spear! O clouds, unfold! ” and “I shall not cease in mental fight, Till we have built Jerusalem In England’s green and pleasant land. ” The persona plans to kill or rebel, in the name of God in order to build his Jerusalem in England. This is much like Blake’s “London” as both poems exploit the church and authority as corrupt, though in the poem “Jerusalem” Blake discusses his struggle to fight against this conformity and oppression.

London and Jerusalem both describe Blake’s home, England. In London, situated not too far from Blake’s home, a place of corruption, death and depression is exposed whilst in Jerusalem Blake portrays England as a beautiful country, one which however lacks guidance and through Christ, Blake seeks this guidance and will not rest until Jerusalem has been built “In England’s green and pleasant land.

Throughout both poems Blake shows his strong dislike of the Industrial revolution and its effect on England, focusing on London. Blake akin to change throughout his life, portrays, through his two poems the changes occurring in his life and that of many other people and how these changes affect the inhabitants of the world and the world its self.

Commentary on London and Jerusalem by William Blake. (2017, Aug 01). Retrieved from https://studymoose.com/commentary-on-london-and-jerusalem-by-william-blake-essay 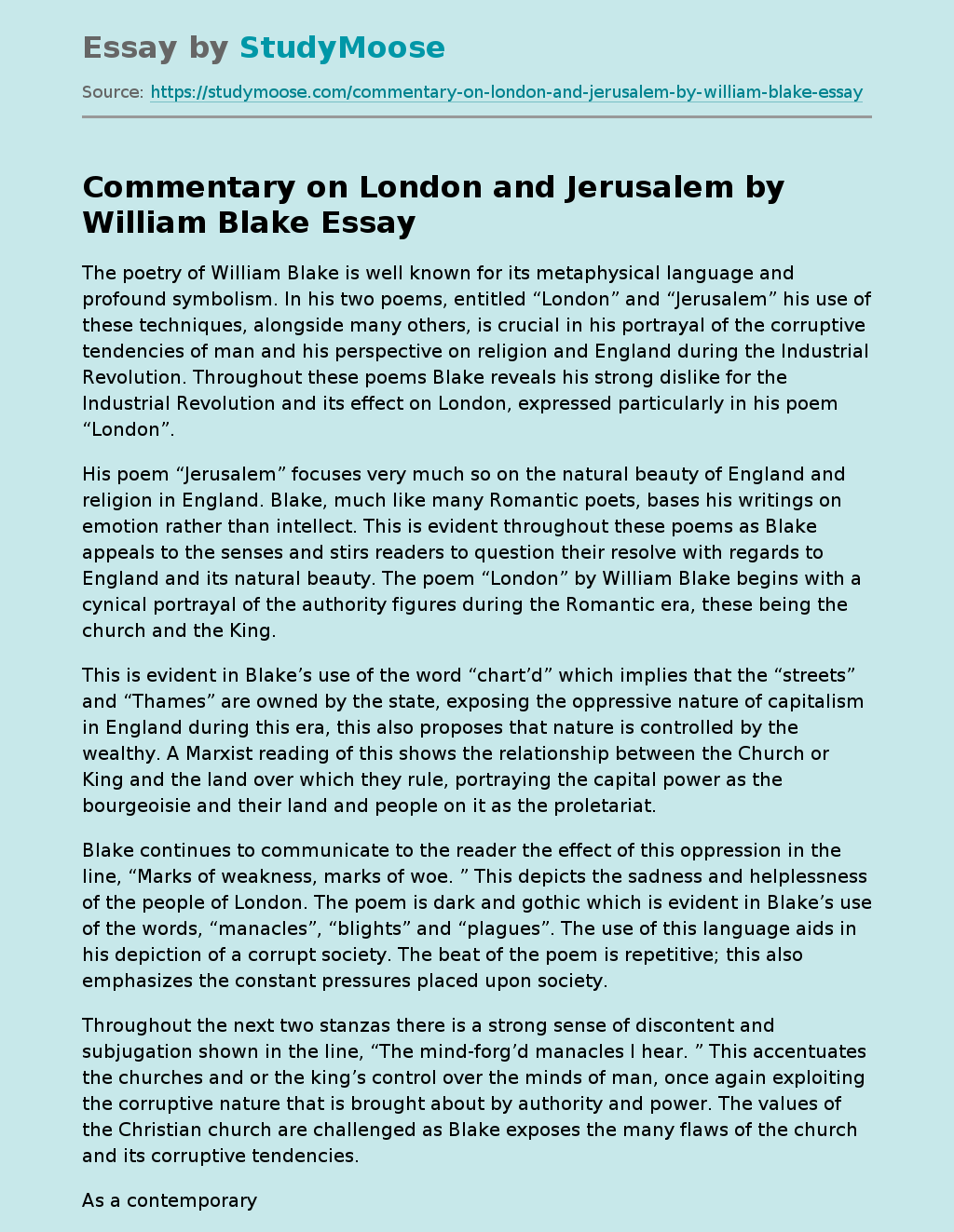