There is an ongoing debate over who the victor was during the Cold War, the United States or the former Soviet Union. One of the issues leading up to this time of tension between the two nations was Joseph Stalin’s unrelenting attempts to expand the USSR’s communist regime. Another issue came about when, at the end of World War II, Stalin stationed soldiers in northern Iran to force their access to the latter’s abundance of oil. The Soviet Union removed their troops from Iran quickly after harsh criticism from British and American leaders.

Don't use plagiarized sources. Get your custom essay on
“ Cold War: The United States and Soviet Union ”
Get custom paper
NEW! smart matching with writer

The United States was the victor of the enigmatic war due to its immense, sustained global influence involving the containment of communist expansion.

The Marshall Plan was one of, if not the most, the most successful overseas aid plans in America’s history. Created by Secretary of State George C. Marshall, it was a more diplomatic approach to rebuild war-ruined Europe, and it wanted to shine a positive light on the strategy of containment.

It offered enormous amounts of money to enemy and ally nations alike. Although American political leaders feared the countries in their weakened states would succumb to Soviet way of life, the plan was not an attack on communism itself. ‘Our policy is directed not against ant country or doctrine,’ he’d said about his aid plan in his June 1947 speech at Harvard University, ‘but against hunger poverty, desperation, and chaos’ (Marshall). The Marshall Plan showed American influence in the Eastern hemisphere by being the provider of new beginnings for a lot of the countries still riddled with devastation and hunger even two years after the fighting of World War II had officially ended.

The United States helped Europe quite literally get back on its feet and return it to the powerhouse status it has been known for. American culture would seep into European culture for the decades to come and would migrate father south to Asia.

The American reconstruction of Japan was another feat tacked onto the agenda before the start of the 1950s. The country was led under General Douglas MacArthur until 1948, and a new, liberal constitution was put into place. With the constitution, women had suffrage for the first time and banned Japan from the policy of war. The American government also suggested to break apart Japan’s corporate giants that helped with World War II; however, this was struck down in 1948 to reconstruct Japan as anticommunist force in Asia. The plan seemed to work in the country’s favor because by the 1950s, their economy was back on the rise. In a document from the National Security Council 68, the author tells the reader this about factors altering historic distributions of power, ‘First, the defeat of Germany and Japan and the decline of the British and French Empires have interacted with the development of the United States [and the Soviet Union] in such a way that power increasingly gravitated to these [two] centers’ (1). Japan’s unconditional surrender and American occupation caused the latter’s culture, morals, lifestyle albeit forcefully to be ingrained in Japan’s orbit for at least a period of time, while sustaining most of their own ways of life. It caused a mixture of two very distinct cultures to form a unique disposition and a forced understanding.

Containment, concocted by diplomat George F. Kennan, was a strategy to control the spread of communism and Soviet influence. What ultimately inspired the strategy was Kennan’s 1946 Long Telegram. It served as a way of guiding America through the process of handling the Soviet government. ‘Soviet pressure for participation in trusteeship arrangements thus represents, in my opinion, a desire to be in a position to complicate and inhibit exertion of Western influence at such points rather than to provide major channel for exerting of Soviet power’ (Kennan 6). Tied to containment was the Truman Doctrine. President Truman gave the 1947 speech to disclose his own plan to aid postwar Europe, but this was a direct advance on communism unlike the Marshall Plan. His aid plan targeted two specific nations, Greece and Turkey, from the looming threat of communism. Communist revolutionaries put Greece’s monarchy at stake, and the USSR were forcing Turkey’s hand in governing the straits linking the Black and Mediterranean Seas. President Truman’s address saw that America was entering a powerful international role and helped establish such agencies as the Atomic Energy Commission, National Security Council, and Central Intelligence Agency.

The scrutiny of communism was so deeply rooted into the Oval Office that in a letter responding to a telegram from Senator Joseph McCarthy, he wrote this, ‘Your telegram is not only not true and an insolent approach to a situation that should have been worked out between man and man but it shows conclusively that you are not even fit to have a hand in the operation of the Government of the United States’ (Truman 5). The North Atlantic Treaty Organization also played a big role in the containment policy. The United States, Canada, and several other western European nations swore allied protection against future run-ins with the Soviet Union, and it was the first longstanding military treaty between the U.S. and Europe after the Treaty of Amity and Commerce with France back in the eighteenth century. America, with the help of other nations, was able to draw forces against taking militaristic action with the former Soviet Union. President Truman and notable world leaders were able to stall, at least a bit, Stalin’s efforts to establish communism.

The United States’ global influence, domestic and abroad, was the reason it remains one of the powerhouse nations of the world. Without this influence, their attempts to stop the spread of communism might have been for naught. The nations we see today broadcasted may not have existed if Stalin’s plans succeeded. While Russia also remains one other powerful nation, its power seems to have diminished somewhat since the end of World War II. It is important to discuss the outcome of the Cold War because there was no clear victor. Both countries came out victories and losses, and those losses led to where the world is today. 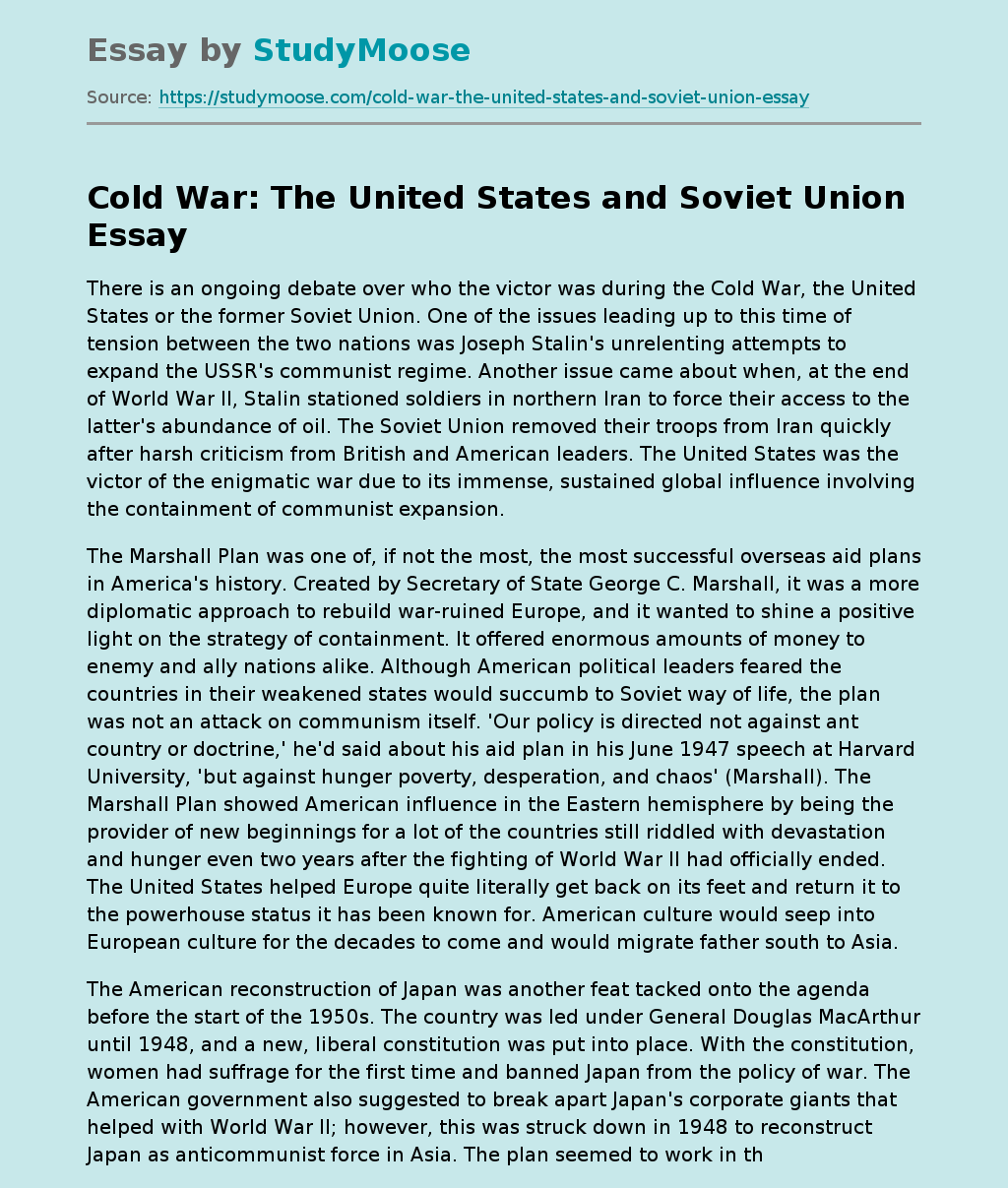