When it comes to movies, People have many different types of genres they prefer to watch. It is easy to assume almost everyone has a preference when it comes to movies, because there have been so many different types made to appeal to all viewers. There are three major categories that have wide appeal Romance, Comedy, and Horror. The romance, comedy and horror genres are the most popular in the movie industry. Wall Street Journal Doris Walsh says: “Romance, Comedy and Horror movies are the most popular to rent in every age group they have the most factors that intrigue and entice the viewer into the fantasy or documentary aspect of the movie”.

Don't use plagiarized sources. Get your custom essay on
“ Classification of Movies ”
Get custom paper
NEW! smart matching with writer

The first genre of movies, are romance movies The Straits Times (Singapore) Yip Wai Yee says: “I’m a romantic at heart, but it’s not only because of that. Sometimes, you just want to feel more, to have your heart squeezed and get that rush of emotion that only these movies will give you.

” The romance genre is more appealing to the female audience.

New York Times Writer Bill Carter says: “ Love at first sight, abandoned by Sunday afternoon companion, deceived by the best friend who became the mistress, women appeal to romance imagining themselves in the scenes from these relevant situations.” The fantasy and passionate story lines are so heart wrenching. Whether there is a happy ending or not the passion that’s illustrated becomes so realistic. Love and Basketball a well-known romance movie tops the charts: Baltimore City writer Tom Scocco says,“It’s conceived, essentially, as a three cornered love story, with a basketball holding down the third spot.

It is a story of an African- American male and female who grew up together and share a love for basketball. The passion, heartache, struggle and support the characters have for each other reminds people of their relationships. The second genre is comedy. Wall street journal Denise Jackson says “Comedies have a way of lightening the mood.”

The goals of this genre are to appeal to the viewer’s humorous side. “Comedies use humor to draw the audience attention through its characters and storylines.” Says D.Jackson. The most popular comedy genres are Anarchic comedy, Romantic comedy and slap stick comedy. Anarchic comedy refers to a sub-genre comedy that uses stream of consciousness humor. An anarchic film uses slapstick tendencies that tell a story, considered less physically violent. Romantic comedy great for new couples is a genre that catches the viewer’s heart with love and humor. Slapstick genre incorporates physical comedy into the story. Using visual action, harmless violence, horseplay and depict humor. Comedies give the opportunity to look at scenarios from a humorous perspective. Comedies although really entertaining use scenes that are unrealistic still are fun and enjoyable to watch play out. The third genre is Horror. Horror movies bring the same thrill seeking, danger and suspense to the viewer.

“Horror movies are meant to bring a fear to the audience and can either be fantasy or based on true events. “New York Times” a commentator named Jason Zinoman says scary movies are watched for the really intense emotional experience” and that you never feel more “in the moment” than when terrified at a horror movie. Horror movies bring the same adrenaline rush of emotions from the characters to the audience. In conclusion Romance, Comedy, and Horror films bring various imaginative feelings. Each person is there to gain or learn something different. Whether that be to entertain a new woman/man in your life, or to temporarily set aside personal problems or just to get that suspense feeling viewers tend to enjoy. The film industry goal is to give the viewers a chance to feel the story line and movies of the genres causes an audience to use their imagination to enhance the movie watchers experience. 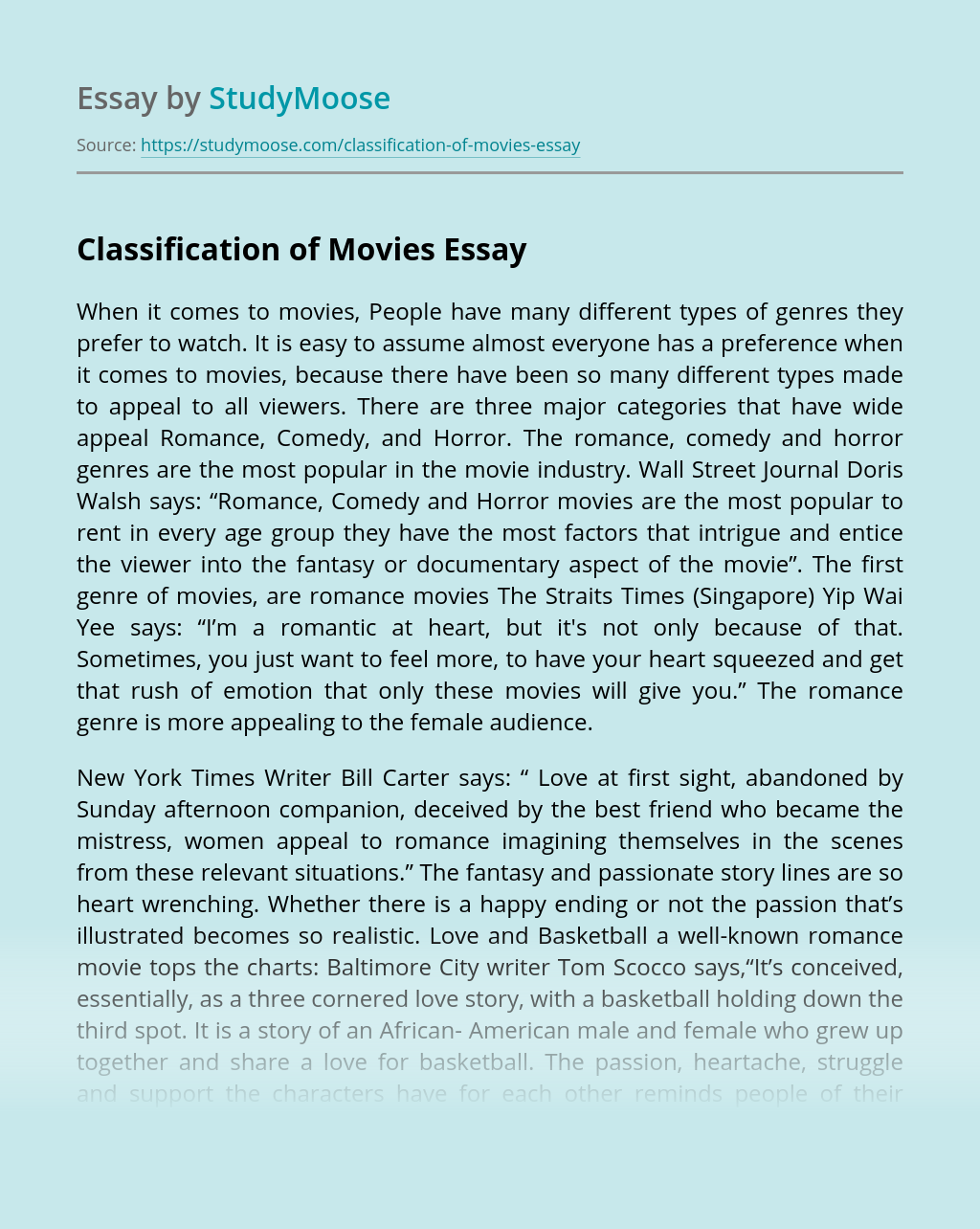