Classical Conditioning and Pros and Cons of Punishment

Classical conditioning is a form of behavioral learning and was first introduced when Ivan Pavlov came upon a study when he was studying the psychology of digestion in dogs. He noticed that the dogs would not just begin salivating when the meat powder was introduced, but also when the person responsible for feeding would enter the room or heard there footsteps. Classical conditioning is when two stimuli are presented in close succession repeatedly, until the response given to one becomes associated with the other.

Don't use plagiarized sources. Get your custom essay on
“ Classical Conditioning and Pros and Cons of Punishment ”
Get custom paper
NEW! smart matching with writer

When my son was small he wanted a dog and I would always watch him play with his dog call Casper. I would watch my son try to put Casper in the front of his 2 seat car and try to strap him down but Casper will always try to bit him.

I had too but a muzzle over Casper’s mouth so he wouldn’t bit my son. Then my son will ride around the compound and pretended Casper was his best friend or sometimes his baby brother.

After checking myself, I realize I was punishing and innocent dog was brutal and violent action which was not really necessary. I decided to teach Casper some tricks so I bought a clicker to start Casper on his training course. The first trick we thought our dog was to sit. From then on, every time my son tell the dog to sit I would click the clicker twice. Soon as Casper sat I would give him a treat, a small piece of beef treat. We would practice this over and over until eventually all I had to do was make two click of the clicker and Casper would sit. Casper after a while would stare at me waiting on the treat. In this situation, the click of the clicker is the neutral stimulus which by itself meant nothing to the dog.

However, when the neutral stimulus comes to be paired with something, the beef treat, it caused the dog to react and in this case to sit. The treat is the unconditioned stimulus and the reaction is unconditioned because no prior learning was required. However, when we paired the click of the clicker with the beef treat it then triggers a reaction in the dog to sit. This now changes the neutral stimulus, the click, into a conditioned stimulus and since Casper now sits at the click it also changes the reaction into a conditioned response. After learning this my son used the same procedure only this time one click was used to teach the dog to come. Now my son doesn’t have to strap Casper in the seat anymore. My son just have to sit in his car and Casper will run after the car and jump into it at sit for himself. Conclusion it is through Pavlov’s discovery of classical conditioning that one can rationalize how a person acquires involuntary reactions to a particular stimulus. Animals as well as humans can be taught to react to certain activities in a particular way. Just as my scenario of teaching my dog to sit with a clicker.

As this paper proves by my own scenario of teaching my dog to sit that classical conditioning is still used today in our everyday lives. To teach a dog the meaning of the click, a treat is given immediately after clicking. Once the dog learns the positive effects of the clicking sound, the clicker itself acts as a conditioned reinforcement. Now Casper seem to run after my son without even hearing the click of the clicker but just a mare rolling on the wheels of his little car. As I have learned about the pros and cons of punishment in my own person training of my dog it don’t have to be always brutal when teaching but rather enhancing what a dog already know with operant condition. Sometimes if we use too much force it my turn a dog into and aggressive and dangerous animal or the dog might become more obedient to its master.

Classical Conditioning and Pros and Cons of Punishment. (2016, Mar 11). Retrieved from http://studymoose.com/classical-conditioning-and-pros-and-cons-of-punishment-essay 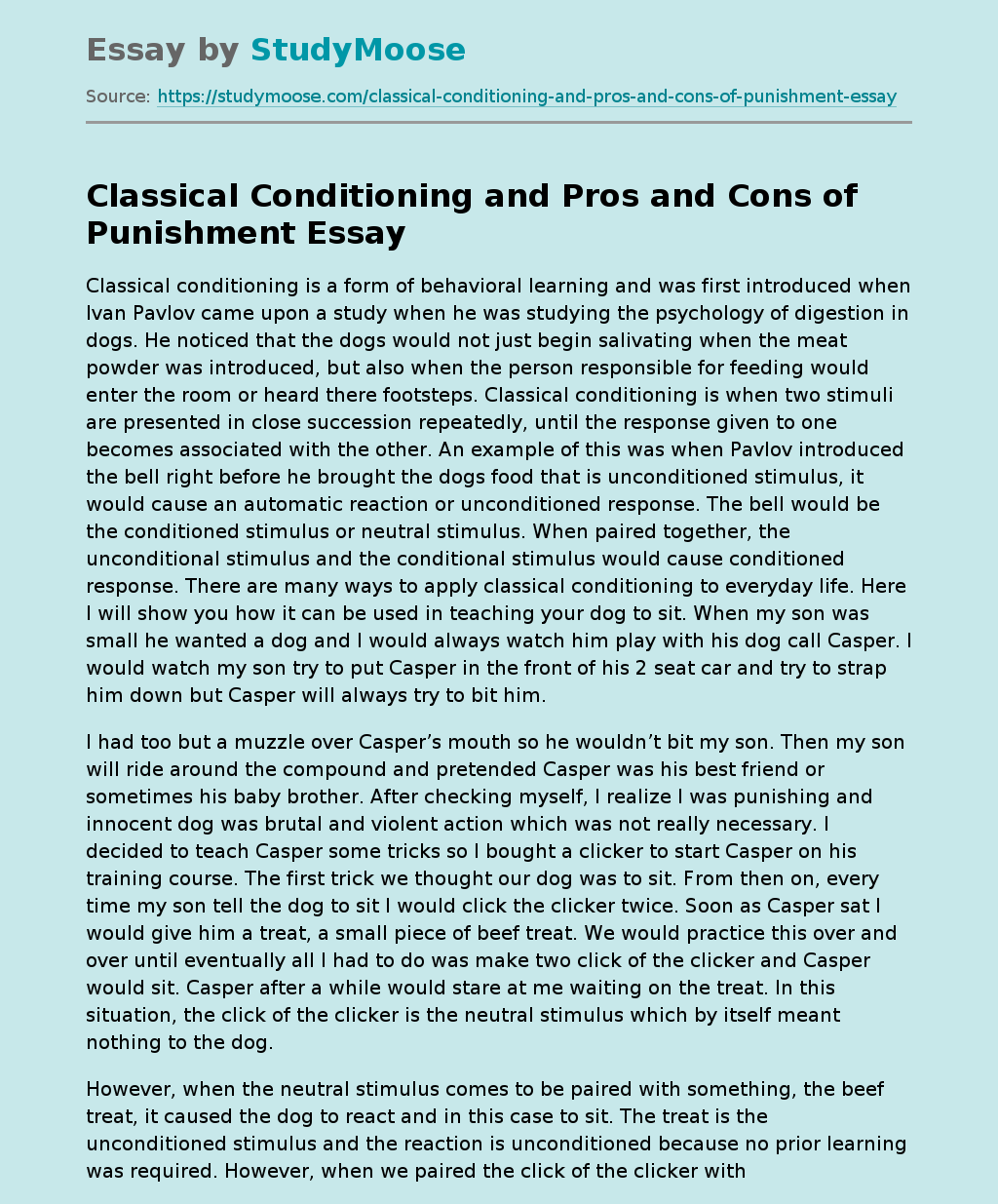