The study I choose to write about is the classic study of “Little Albert”. I choose this study because I found it interesting that experimental work had only been done on one child and that was Little Albert. They choose little Albert because he was a healthy infant and one of the best developed youngsters at that hospital. It was because of these reasons they felt they would do him no harm with the experiment they were getting ready to inflict on him.

Turn in your highest-quality paper
Get a qualified writer to help you with
“ Classic Study of Little Albert Research ”
Get high-quality paper
NEW! AI matching with writers

They would soon find out that their assumptions were wrong!

This study was conducted by John B. Watson. It was done to see what fear reactions can be called out by certain stimuli and then they tested to see if they combined certain stimuli what emotional reaction would it cause little Albert to have if any. The study started when he was 9 months old, but they did not start creating a conditioned response until he was 11 months and 3 days old.

They first started running him through emotional tests that would determine whether fear reactions can be called out by other stimuli than sharp noises and the sudden removal of support. Albert was first introduced to several different variables for example (rats, rabbits, a dog, monkey, mask with hair and without, ect.) He showed no fear, rage, or even cried to any of these objects when first confronted with them. (Classics in the History of Psychology — Watson & Rayner (1920) . Emotional Reactions and Psychological Experimentation,’ American Journal of Psychology, April, 1917, Vol.

The test that call out a fear reaction was done on Little Albert by striking a hammer upon a suspended steel bar four feet in length and three-fourths of an inch in diameter. Although the first two times produced a small reaction to the noise it wasn’t until the third try of this test that produced little Albert to go into a full out crying fit. This was the first time an emotional situation in the laboratory has produced any fear in Little Albert.

After they got an emotional response out of little Albert they started pairing the loud noises to a white rat along with other objects in which after several tries it caused Albert to have a fear response to the white rat even when it wasn’t paired with a loud noise. It had a negative effect on him throughout his life by causing him fear when he seen fury, white objects. (Classics in the History of Psychology — Watson & Rayner (1920).

Emotional Reactions and Psychological Experimentation,’ American Journal of Psychology, April, 1917, Vol. 28, pp. 163-174…) Explain how classical and/or operant conditioning is applied in the study: from this experiment they wanted to see if they could condition a fear of an animal with a loud simultaneously sound. If it does produce a conditioned emotional response can it be transfer to other animals and object? They found that they could condition a fear response in Little Albert by pairing a white rat with a loud noise in which triggered the fear response. After doing this so many times it soon became evident that they created not only fear in Little Albert with the white rat but with a lot of other fury objects and animals. The white rat was a neutral stimulus.

To me the risk too little Albert where high. It is clear that it caused harm to the little boy be creating an emotional response that resulted in little Albert developing an extreme fear. The other ethical problem I see from this study is that Albert was not old enough to give proper consent of the study being preform on him. I know his mother agree to it but I don’t think she was made fully aware of what was actually going on in the experiment. Lastly why wasn’t Albert with drawn out of the experiment when he show great distress?

What information was gained as a result of the research? Was the information gained from the study worth the risks? What we gain from this experiment is that our personality and behaviors can be shaped by our past experiences as well as our environment. I don’t think any research is worth risking a person’s health. This experiment obviously caused little Albert great distress within his life and you can’t help but wonder if his life would have been a little easier on him then what it was for him to live in fear.

Classic Study of Little Albert Research. (2016, May 12). Retrieved from http://studymoose.com/classic-study-of-little-albert-research-essay 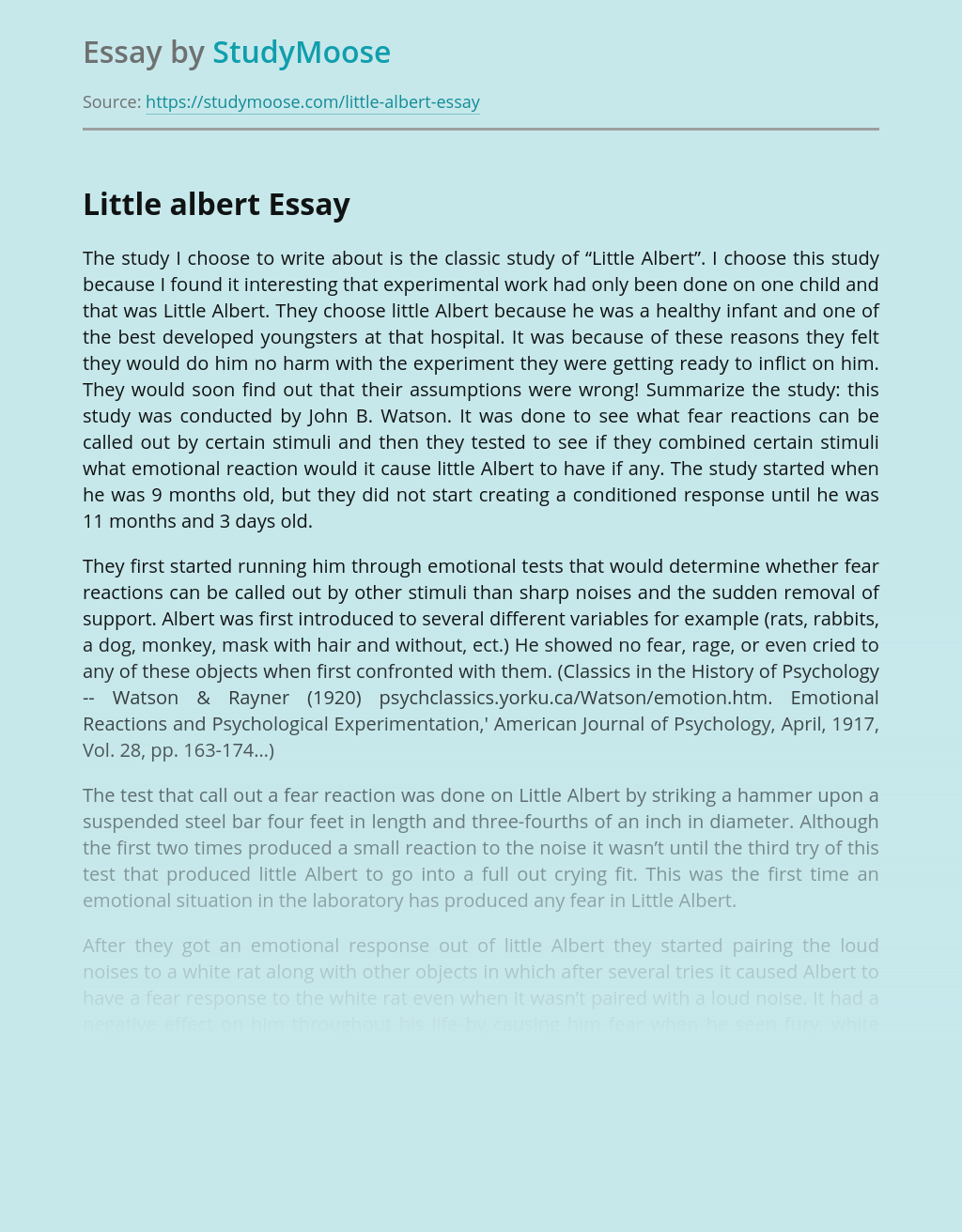 Turn in your highest-quality paper
Get a qualified writer to help you with
“ Classic Study of Little Albert Research ”
Get high-quality paper
Helping students since 2015
Stay Safe, Stay Original