According to graph of 2016 U.S. Demographic, the age segment 18 to 24 years and 25 to 39 years take up the most percent of tickets purchase, are respectively 16% and 24%. However, in 2035, the core audience will increase 9.9 million, and films are focus for 12-24 years old but this will change because the largest growth of the population will be 60 and older, remember that the 60 years and older has the lowest admission per capita 2.4 so the demographic conditions are not favorable.

Understanding that over 71% of the US studio’s revenues are international, this has led studios to internationalize, films must be cross-cultural, in order to increase the ticket sales volume.

Don't use plagiarized sources. Get your custom essay on
“ The Movie Industry in 2017 ”
Get custom paper
NEW! smart matching with writer

The film exhibition industry is facing its biggest drop in demand since 2002, despite revenues peaking at $10.9billion in 2013.Ticket prices have risen 27% since 2005, but they lag behind inflation and distribution and production costs. During the 1990s, the production budget increased by 827 percent over $100 million for major production.

Technology, on the one hand, movie exhibitors switched to digital projection technology to improve image quality and reduce distribution costs by up to 90%.

Like other companies set up in the United States, movie exhibitors must abide by laws and regulations, including taxes. Obtain the required permit. General agreements are: lease, profit sharing, the nature of the agreement on the sale of goods.

I think the biggest threats is convenience problem.

Years of diminishing theater experience, now that you can have most of your theater experience not from your house, TV screen and surround system, is now easier than ever due to improvements in home entertainment technology, the average TV has increased in size while its price has dropped. More comfortable sofas, no pre-movie commercials, other people’s voices or phone interference. So, too many people do not want to waste time to go film and watch movie.

I think the biggest opportunities is film technology’s innovation. As we know, 2007 launched 3d film although the peak was in the 2010 film avatar, released in December 2009, 3d experience declined, only in 2014 over $2 million in ticket sales, 3d shows that a film exhibition industry innovation is not easy to attract audiences. The 4D mobile seat and splash experience is very popular in the us, but it increases ticket prices to three times the normal fare, which makes the experience more fungible.

Force Who / What are they? Analysis of Threat (Use (+) to indicate adds to the threat, (-) indicates decreases threat – e.g. high capital requirements would be a (-) for potential new entrants) Level of Threat (High / Medium / Low)

Bargaining Power of Buyers Low switching cost’s movie exhibitors +. While exhibitors try to standardize their services, customer preferences change depending on location or past experience. Low

It has reduced box office demand in the film industry Medium

Overall Profitability of the Incumbents Although box office receipts have increased in recent years, they have declined steadily.

Overall Attractiveness to Entrants (Barriers to Entry) Studios are facing rising costs and Changes in distribution and exhibition have created big problems, like the shift to digital projection is becoming more popular.

The suggestion of movie exhibitions

In the next few years, the film industry must see more audiences. To achieve this, they need to make the necessary changes to the viewing experience to make audiences more willing to pay for a movie. These changes could include cheaper airfares, but as mentioned earlier, this could affect margins and the bottom line. On the other hand, they can give the audience more money. This can be done by reducing the number and frequency of films shown in cinemas. By reducing these costs, you will be able to add additional facilities that will make the movie-going experience more enjoyable.

For a long-term plan, with the development of world trade and globalization, International expansion seems to be the best bet for the industry’s long-term interests. While going to the movies may not be the most popular action in the United States today, that doesn’t mean the rest of the world is watching the same trend. Through the international expansion of cinemas, they will increase their growth potential and profits. They open doors to new markets with different needs. 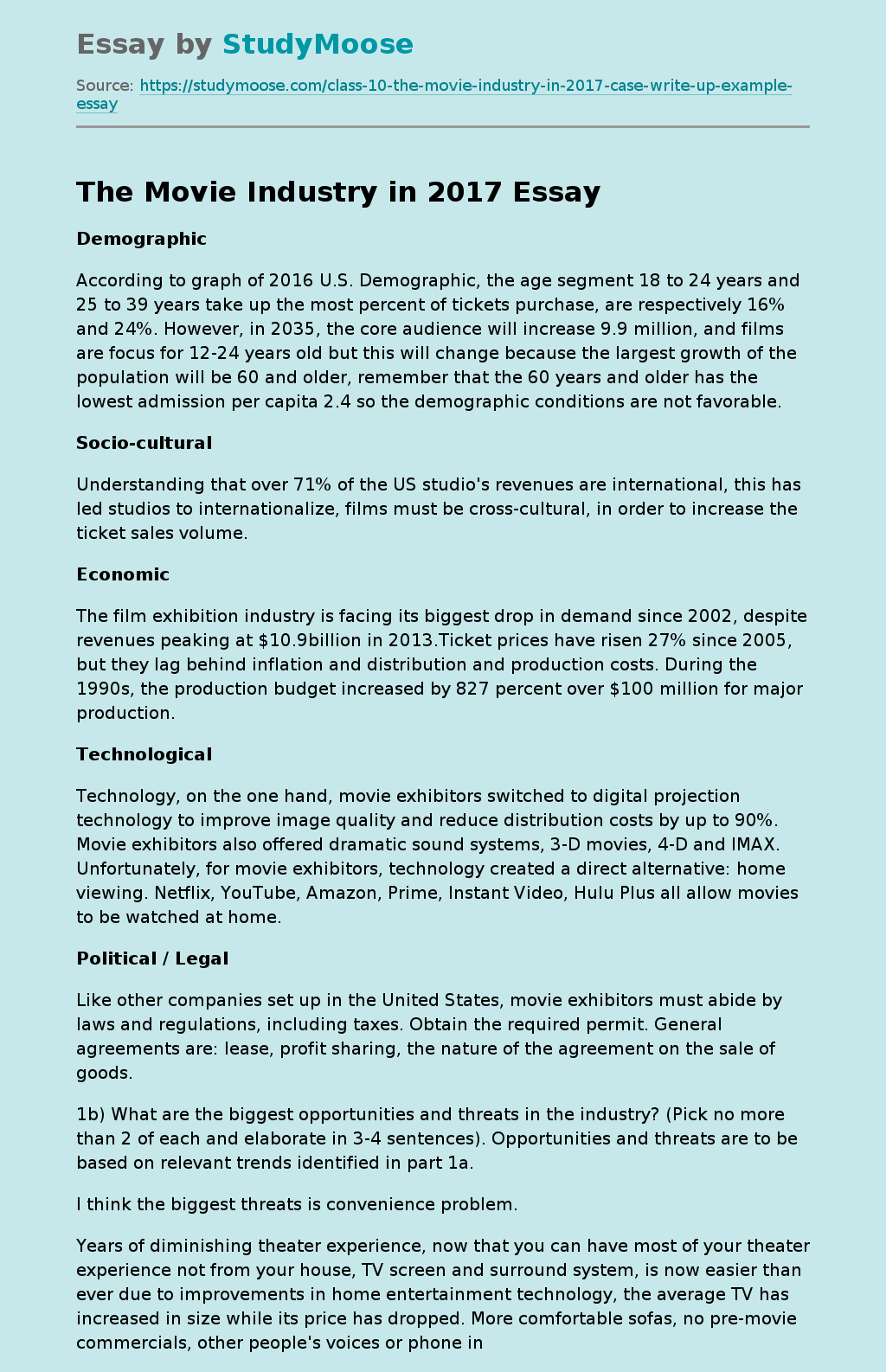