In the textbook, there are two circular flow diagrams. One represents the flows in the macro-economy as a closed system and the other represents the flows as an open system. The circular flow diagrams show how money travels through the economic systems including businesses, households, foreign agents and governments (Editorial Board, 2013). Within the closed and open systems there are two consumers. The first consumers are households that buy goods and services and the second consumers are those businesses that purchase factors to produce.

Don't use plagiarized sources. Get your custom essay on
“ Circular Flow Diagram ”
Get custom paper
NEW! smart matching with writer

The first type of circular flow is that of the closed macro-economy system. This is the circular flow of money. A closed system is an economic model that counts only domestic exchanges but not the foreign agents. This therefore means that without foreign agents, the government or the economy is free of leakages. This system is basically shut off from surrounding environments and is self-contained. An example of a closed system would be the Earth system as a whole.

The second type of circular flow in the macro-economy is considered the open system. The open system is the opposite of the closed system. It is an economic model that counts goods and services exchanged domestically and between nations (Editorial Board, 2013). In the diagram in the textbook, it indicates the circular flow of money in an open economy system.

Open systems allow energy and mass to pass through and across the system boundary. An example of an open system would be the ocean. The ocean is considered an open system because it allows energy and mass to pass through. Energy which is solar radiation, latent heat and mass including water vapor and precipitation all pass across the boundary between the atmosphere and hydrosphere of the ocean.

Leakages are taxes, savings, and import expenditures not spend in the economy. There are several leaks in the open system which includes leaks from households to companies, businesses to owners of factors of production and from both households and businesses to the government. Money leakages are created when an American consumer buys imports or when a company in the United States hires someone from India to work as a customer service representative. The households leaks when consumers buy goods and services from foreign businesses, and the money those households save whether in checking accounts or stocking. The business leaks when firms use labor, capital and other resources from foreign households. These leaks then inject money into the system.

Injection is considered as things that enter into the households or businesses due to the leaks that were caused in the open system. An injection that comes into the household is that of foreign firms sending wages and rent to US households. An injection that comes into the businesses is that of foreign households purchasing goods produced by US firms. An example of a leakage would be a household buying a foreign car from a foreign company outside the United States. An example of an injection would be households in japan purchasing pens and pencils from firms in the United States.

The difference between closed systems and open systems can be defined easily. Getting a better understanding of the two systems and how they work can help us operate throughout our daily lives and the world around us. As we grow we continue to learn about our economy and how the government interacts with households and companies. 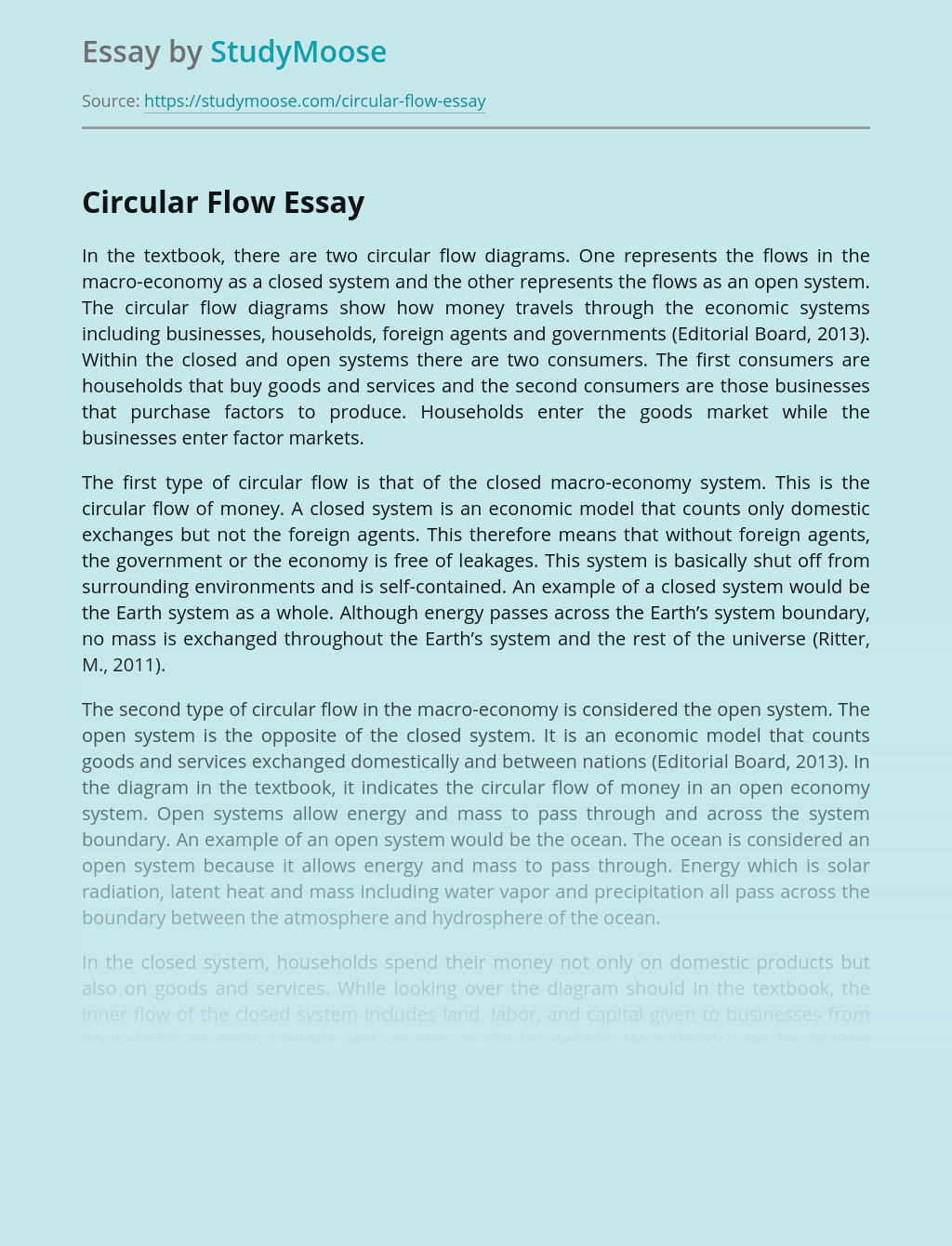