Christians believe that everyone should have a chance to change

The New Testament teaches us to forgive one and other. An example of this is the women caught in adultery “Teacher, this woman was caught red-handed in the act of adultery. What do you say? They were trying to trap him into saying something incriminating so they could bring charges against him. He straightened up and said the sinless one among you, go first: Throw the stone. Hearing that, they walked away, one after another, beginning with the oldest. The woman was left alone.

Don't use plagiarized sources. Get your custom essay on
“ Christians believe that everyone should have a chance to change ”
Get custom paper
NEW! smart matching with writer

Jesus stood up and spoke to her. Woman, where are they? Does no one condemn you? No one, master. Neither do I,” said Jesus. “Go on your way. From now on, don’t sin.” Mark 8. As Christians we learn that Jesus tries to show up all compassion, he accepts that the person has done something wrong, but he knows that everyone has the right to be forgiven. Jesus teaches us that we should rather punish someone rather take another life.

The church teaches us that all life is sacred and none should be taken. He knows that only himself can judge he was born without sin, he knows if he wanted to he could kill the women, but he offered her a chance to return “Does anyone commend you? Neither do I”

Some Christians believe that the death penalty is wrong. They believe that vengeance and revenge is wrong, Jesus taught us to turn the other cheek. He did not want us to hate our enemies.

However Some Christians agree with the death penalty and say that in Matthew’s gospel he says “an eye for an eye a tooth for a tooth a life for a life” meaning that if someone is to kill you then you have the right to kill him, but in the death penalty an executioner is chosen to kill the convicted.

But if the executioner kills the convict then is he not as bad as the convict he killed. It is all a vicious circle where people hurt each other.

Some Christians will respond in a positive way to the death penalty, they would say that the Catechism of the Catholic Church tells us that “the death penalty if acceptable if there is no way of defending society against the aggressor”. The death penalty gives closure to the victim’s families it makes them feel of though their son or daughter has not died in vein. In genesis 9:6 it says “Whoever sheds blood of man by man shall his blood be shed for in the image of God we are made”. As a society we believe that everyone has the right to feel safe and secure.

As Catholic we believe in helping the least of our brothers. So how do we as Christians offer support to others, well we:

o Prisoners Sunday- This is a Sunday in the year when we forget about our sins and things we have done wrong, and try to pray for the other people in jail.

o Vigils- This would normally take place for some on the night before their murder. A long mass is held in their name we pray for them and ask God to help to guide them.

These are the most popular groups Christian groups involving Christians groups helping the least of our brothers .

From a social point of view in society because of prejudice and discrimination a man of “colour” would be more likely to get the death penalty than a “white man”. It is also degrading to human we are all made in the image of the God so we must respect our life not destroy it. The death penalty gives the offenders no chance to reform, Jesus told us that everyone should have a chance to reform no one derives to die. Even if God thought that it was our turn to die it is his decision not mine or yours, we must respect that God is a maker so he should decide if we live or not.

Christians believe that everyone should have a chance to change. (2020, Jun 01). Retrieved from https://studymoose.com/christians-believe-everyone-chance-change-new-essay 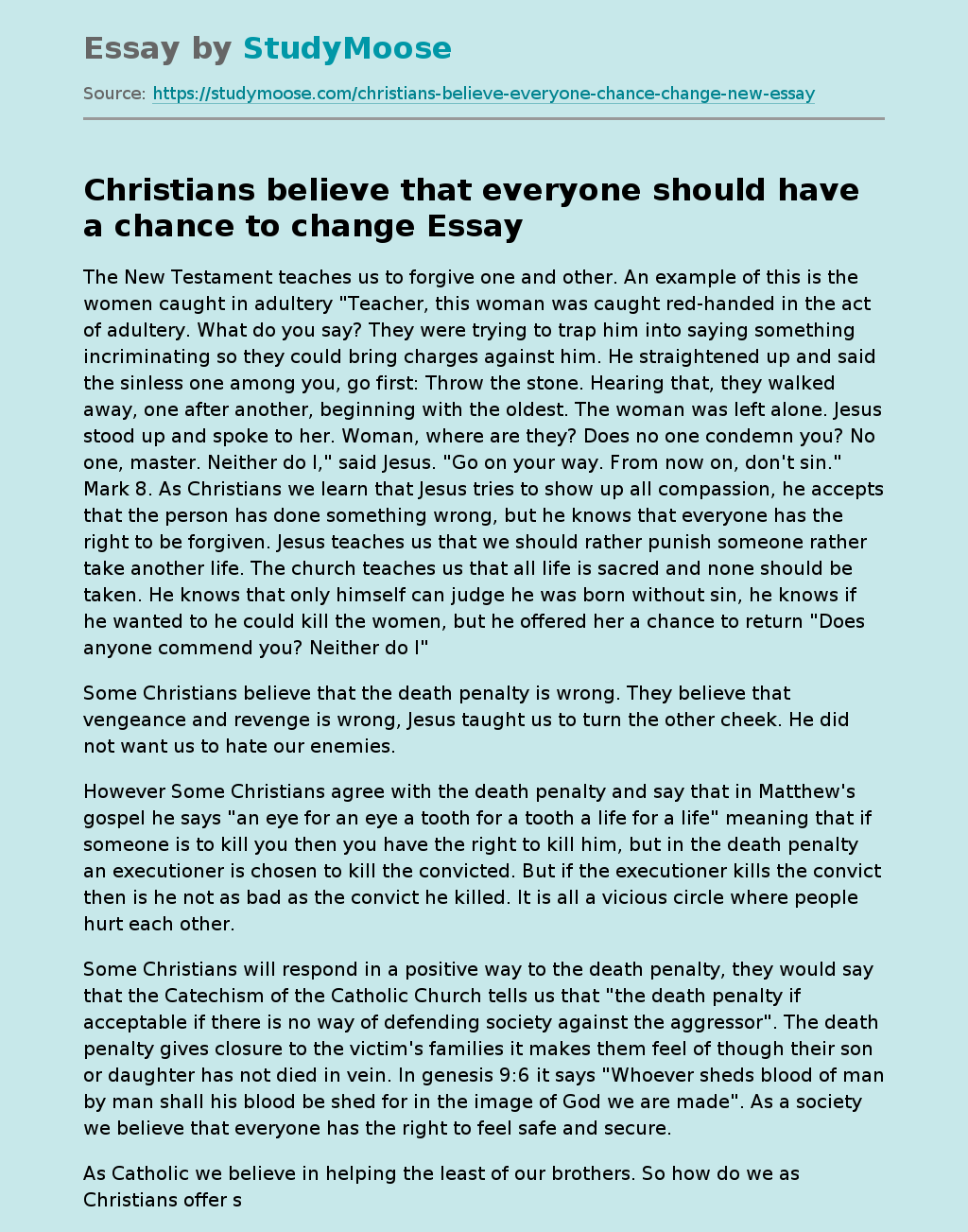