Throughout many ages religion has been a very important part of history. It shaped many cultures and allowed us to better understand many civilizations. Two of these cultures are those of the Christians and Greeks. Both have similarities and differences in their religious beliefs that have been compared often and I have chosen to discuss the similarities and differences of Christianity and ancient Greek mythology.

Christianity is a monotheistic religion, or belief in only one God, and spiritual practices are based on the Old Testament and the teachings of Jesus as written in the New Testament of the Bible, with the role of Jesus as savior and the Son of God.

Greek mythology is a polytheistic religion, which is the belief in and worship of multiple deities, called gods and goddesses, belonging to the culture of ancient Greece.

Even though their definitions are different, the faith of Christianity and one God and the culture of the Greeks in mythology of many gods are alike in a number of ways.

To begin, in both religions humans believe that there are speakers for their God/gods. These people include pastors, priests and nuns in Christianity, and storytellers or prophets in Greek times. Furthermore, the people believe that their God or gods are above humans. Both cultures believe a god is above all mortal and of this earth, and he or she listens to people when they need help, and have supernatural power to help. This is why both the Christians and the Greeks pray to their God and gods for forgiveness.

Another similarity between the religious beliefs of these two cultures is that they have explanations for many of ancient mysteries of life and major events on earth. The ancient Greeks and early Christians tried to find an explanation for the evil in the world, and both blame a woman for man’s downfall. Greeks believe a woman named Pandora opened a forbidden box and released all evil into the world. Christians believe a woman named Eve released evil after eating from a forbidden tree.

Also, in both the ancient Greek and Christian beliefs of the early world, there exist stories of great floods that destroyed most of humankind. In Greek mythology, Zeus orders a man named Deucalion to make a chest in which he and his family can survive the flood Zeus was going to bring upon the earth. In the Bible, the account of Christian beliefs, God orders a man named Noah to build an ark in which he and his family, and two of each animal, can survive the destruction from a flood God was going to send.

War was also a common characteristic of both the ancient Greek world and of the Biblical world. For example, the Trojan War is a major event in Greek history, and is written about most famously in Homer’s Iliad. The gods always seemed to play important roles in this war, especially Zeus, Ares the god of war, and the other and goddesses living on Mount Olympus. Wars between Greek city-states were also common, with gods and goddesses almost always involved in them in some way.

In similar comparison, the Bible accounts many stories of wars between different countries and religious groups, with God being involved in some way in the outcome or fate of the peoples. One of the most famous examples is the war between the Philistines and the Israelites. In this war, God interfered and sent a small shepherd boy David to save the Israelites.

David does so by killing the giant Goliath, a super-human thing he would not have been able to accomplish without God’s help. These examples show the cross-cultural belief that war was an important event in the ancient world, and the gods, and God, played significant roles.

While Christianity and ancient Greek mythology have many similarities, there are key differences. The main and most obvious difference is that Christian belief is about only one God, and its beliefs and commandments are written about in the Bible. Christians regard the stories told in Bible as actual historical accounts of important people, events and concepts of faith. Greek mythology had 13 major gods and goddesses, and many lesser gods. Different Greek cities also worshipped different deities.

There is no book like the “Bible”, rather many collections of stories that shaped early Greek culture. In short, Greek mythology was created to be the Greek’s science for why things happened. Once they thought they figured out how things really happened, the belief in gods and goddesses faded away from Greek culture.

The final difference I want to discuss to compare the ancient Greek creation story and that of Christian belief. In the ancient Greek story, at first there was only Chaos, a shapeless mass of darkness and meaninglessness. Out of Chaos came Nyx (night) and Erebus (the unfathomable deep). The first god to come into existence was Gaea, Mother Earth, though no one knows where she came from or how she came into being. Uranus, Father Sky, was born of Gaea as she slept.

He became her husband, and together they had many children. One of these first gods’ descendants was Zeus. After much war between the gods and goddesses, Zeus became most powerful and assigned two lower gods the task of populating the earth with mortal creatures. With that task, one of the two gods granted so many gifts on the lower animals that when the time came to create man, there was nothing left. The beasts already had the sharp teeth and claws, the warm fur and feathers, the tough, protective hides, the wings and shells, speed, size, and strength.

The wiser of these two lower gods was given task to figure out what gifts to bestow on man. The gods gave man a more noble, upright stance, so man would be above the beasts, with his face turned toward the heavens rather then down toward the ground. He also gave man an intelligence that reached much higher than the beasts’ mere cunning.

In the Christian creation story, God was present in the beginning and He created the universe. At first the earth was shapeless and covered in darkness, and God’s spirit hovered over the waters. God said, “Let there be light”. And there was light. God divided the day from the night, naming them ‘ day’ and ‘night’. On the second through fifth day God made the heavens, commanded the waters to fill with living creatures and the air to fill with birds. On the sixth day God commanded the earth to bring forth all kinds of living creatures and He saw that it was good. God then said ” Let us make man in our own image”.

So God created man and woman in his own likeness and gave them authority over all living things. Adam, the first man, was created by God out of soil and given life by God’s breath. Adam named all the animals and birds that God had made, But Adam had no companion of his own so God caused Adam to fall into a deep sleep and created woman – Eve- from one of Adam’s ribs.

In addition, unlike the beginning void of Chaos in Greek mythology, God is not a void of nothingness, but the beginning of all things. God also remains the ruler of the entire world in Biblical stories, while the Greek Chaos is forced out by several actual divine beings, the most important and permanent of those being Zeus.

In conclusion I found there to be many interesting similarities between Christian faith and ancient Greek religious culture, but one final difference is that Christianity is practiced today and the Bible widely read in many countries and published in many languages, while ancient Greek belief system has faded away and become the stories of fantastical books, myths and legends.my 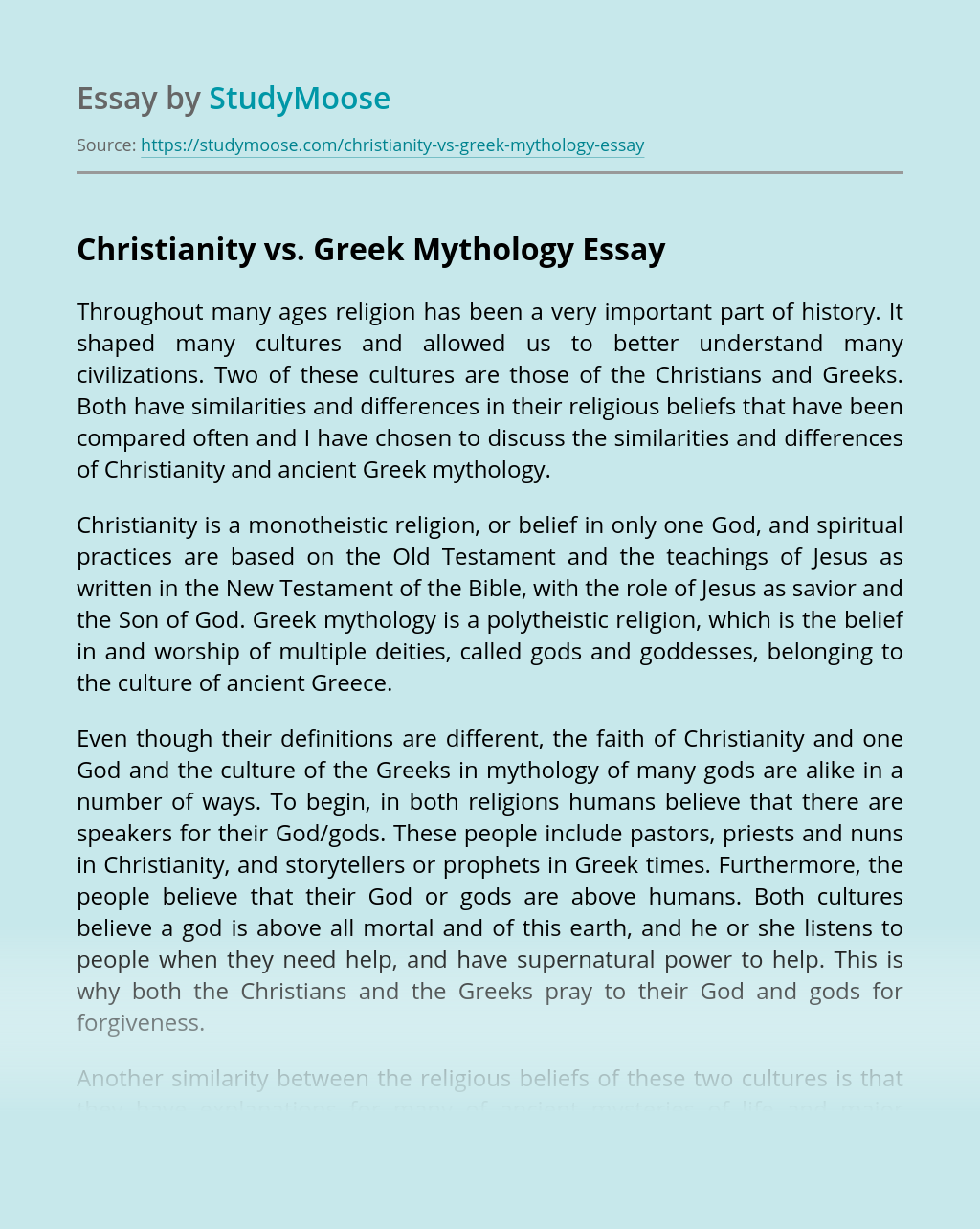 Don’t waste time
Get a verified writer to help you with Christianity vs. Greek Mythology
Hire verified writer
$35.80 for a 2-page paper
Stay Safe, Stay Original