Background History of the Company

Chowking (Chinese: ??) is a Philippine-based chain that pioneered the Asian quick-service restaurant concept in the Philippines. The concept combines a Western fast-food service style with Chinese food. Chowking predominantly sells noodle soups, dimsum, and rice toppings. The company was founded in 1985 at a time when Western-style burger joints were dominating the Philippine fast food scene. Its first store is strategically located at the Makati Commercial Center. In 1989, Chowking started expanding its market share amid the volatility in the domestic market.

It started its franchising operations and made its entry into the provincial markets the same year particularly in Meycauayan, Bulacan. It also released its first Chowking TV commercial. In 1991, Chowking launches its Food Delivery Service.

8 Million as of 1993. Its annual system-wide sales hit P522 Million in 1994. In 1996, Chowking opens 100th store and the sales increase to P1.31 Billion. On January 1, 2000, Chowking became a wholly owned subsidiary of Jollibee Foods Corporation, the Philippines’ biggest fast-food chain. The change in ownership gave rise to store renovations and a new corporate look and mindset that is visible from front-end to back-end. In 2008, Chowking announced the completion of a Php270-million (USD 5.65-million) modernization program, which will help set the stage for the company’s future growth. Called “Project DMSSM” (pronounced “dimsum”) for “Designed, Modernized and Streamlined Supply Chain and Manufacturing,” the two-year modernization program that started in 2006 involves the expansion and renovation of Chowking’s Noodle Building, increased automation, and the improved integration of food manufacturing processes in its two commissaries in Muntinlupa City.

The CHOWKING FOOD CORPORATION gained entrance to the Philippines’ highly competitive fast-food industry in 1985, at a time when it was dominated by western-style burger joints. It positioned itself in a niche where it could be a strong leader, by adopting the best features of two distinct restaurant personalities — on the one hand, the traditional Chinese restaurant, with its menu of delectable, sumptuous but easy-to-prepare and reasonably-priced dishes; on the other, the modern, western-style fast-food joint, with its eye-catching façade, bright interiors and young staff dispensing friendly and snappy service — and fused them into a unique concept: the Oriental quick-service restaurant. With focus on its core competencies to create differentiated, superior product value, Chowking has stood the test of shifting tastes, changing lifestyles and a volatile market, to develop its own set of loyal customers that keeps growing year in and year out.

In 1989, in an aggressive bid to expand its client base and capture a bigger share of the market, the company initiated its franchising operations and marked its entry into the provincial market. The twin moves enabled the company to pursue an ambitious expansion program that has made Chowking the largest Oriental quick-service (QSR) chain in the Philippines, enjoying high visibility in all the major cities and towns in the country’s main island groups, Luzon, Visayas and Mindanao. To ensure its continued growth, Chowking explored markets outside the Philippines. As of 2008, Chowking has over 400 stores within the Philippines and in markets such as the United States, Middle East and Indonesia. Chowking has steadily been expanding its network in the Philippines. It is able to ensure the freshness of its food and the reliability of its supply through its main commissaries in Highland, Muntinlupa City and Sucat, Parañaque City as well as satellite commissaries in Iloilo, Cebu, Cagayan de Oro, Davao, and Pangasinan.

In Dubai in the United Arab Emirates, Chowking’s commissary serves ten stores and is expanding to other areas. Emboldened by its success on the domestic front, the company ventured into the global market in 1995, with the opening of a Chowking store in California, USA. Today, Chowking outlets are operating in the US West Coast under a licensing agreement with a Filipino expatriate family. A similar agreement has been forged with a Dubai national for the operation of Chowking stores in the Middle East. The turn of the millennium was a turning point for Chowking Food Corporation. On January 1, 2000 Chowking became a wholly owned subsidiary of Jollibee Foods Corporation, the largest, most respected restaurant chain in the Philippines. With the merger came numerous changes in Chowking. The change of ownership gave rise to renovations and improvements, beginning with a fresh corporate image made concrete by a brand-new retail identity. This identity manifests itself in almost all the physical aspects of the store — the logo, façade, layout, décor, counter, menu board, furniture, equipment and even the staff uniforms.

Launched in June 2000, the new corporate look is worn by all new stores, while old stores are undergoing renovation to conform to the new image. All these changes are complemented by front-end and back-end systems designed to ensure cost-efficiency, speed up service and increase customer satisfaction. Hand in hand with the new physical features is the renewed pursuit of high standards in Food, Service and Cleanliness (FSC), the three pillars of the restaurant business. The goal has been still is as fundamental as it is simple: To serve consistently delicious and hot food in five minutes, amid sanitary and clean-smelling surroundings.

The acquiring of the Chowking Food Corporation by the Jollibee Foods Corporation it bolsters their individual positions in the Philippine market — Jollibee as the undisputed market leader in the fast-food industry, Chowking as the No.1 Oriental quick-service restaurant chain. Jollibee lends its experience and prestige as the Philippines’ dominant player in the fast-food industry, while Chowking is poised to contribute significantly to the annual system wide sales of the Jollibee group. As they gear up for the challenges ahead, both companies are optimizing the advantages of the merger with synergies aimed at cutting costs and improving efficiency in their stores.

Usually Chowking is just next to the leading competitors like Jollibee, McDonald’s, KFC, Max’s Restaurant and Pizza Hut. Yet, because of its being competitive in terms of services, it is on the top 10 in the food industry with the expected annual system — wide sales of almost P12 Billion with a local store network of 400 at yearend of 2010. The strategic alliance between Chowking and Jollibee has proven mutually beneficial to both companies, bolstering their individual positions in the Philippines market — Jollibee as the undisputed market leader in the fast-food industry, Chowking as the country’s No. 1 Oriental Quick — Service restaurant chain. The hard work and vigilance have paid off: Chowking has been logging double — digit growth in system — wide sales since 2001, the fastest in the industry.

McDonald’s in the Philippines

Chowking have the Commissary in Highland, Muntinlupa City and Sucat, Parañaque City as well as satellite commissaries in Iloilo, Cebu, Cagayan de Oro, Davao, and Pangasinan which supplies the entire raw and processed product in all branches in the Philippines of its food to ensure the freshness and the reliability of its supply. Accessibility of resources is at best because ordered stocks needed come on time. Also if unexpected run out of products they can borrow from nearby branches.

Our dream:to be the largest Oriental food chain in the world. Our aim:to satisfy the discriminating needs of our global consumers by serving them consistent, High-quality food products in a friendly, caring atmosphere at prices they can truly afford.

These are the set of beliefs and values shared by the members of the Chowking family that guide us in achieving our mission and vision. These are the way we do things around here. These are the character of our organization.

The customers have preferred us over many competitors. The hard-earned money they spend in our store enables us to buy our food, pay us to earn our living that allows us to buy our food, pay for our rent, send our children to school, buy our medicine, and pay for our other needs. Therefore, they deserve no less than the best from us: our superb FSC, our heartfelt care, warm attention and friendly smiles.

Being honest and true to our words and actions are God-given and invaluable treasures passed on to us by our parents, and which we will pass on to our children. We will live by its principles in our place of work, at home and in all our dealings with others. We may not be rich but can proudly look straight into the eyes of our fellowmen, because of our unblemished integrity.

The only sure way to prosperity and to having access to God’s rich blessings is being industrious. Fate is kind, luck smiles and opportunities abound to the hardworking.

Chowking is the fountain spring of our livelihood. It is an extension of our home. We will give it our best. We believe that we are not an insignificant component of what makes Chowking great. We will be forever proud of our company and ever vigilant to keep it always number one.

No man is an island. Life lived and shared with others is a meaningful and happy one at all times. As the golden rule states: “I will do to others as I would like it done to me.

Having fun — smiling and laughing to our heart’s delight as we work hard in giving our best — keeps us energized and inspired. In all things we do, it never makes us tired or bored. It gives meaning, and even adds healthy years to our lives.

We aim for the best. We drive ourselves to be the best. We take every day as a learning experience. We seize all opportunities to improve our skills, increase our knowledge, and be better persons today than we were yesterday. 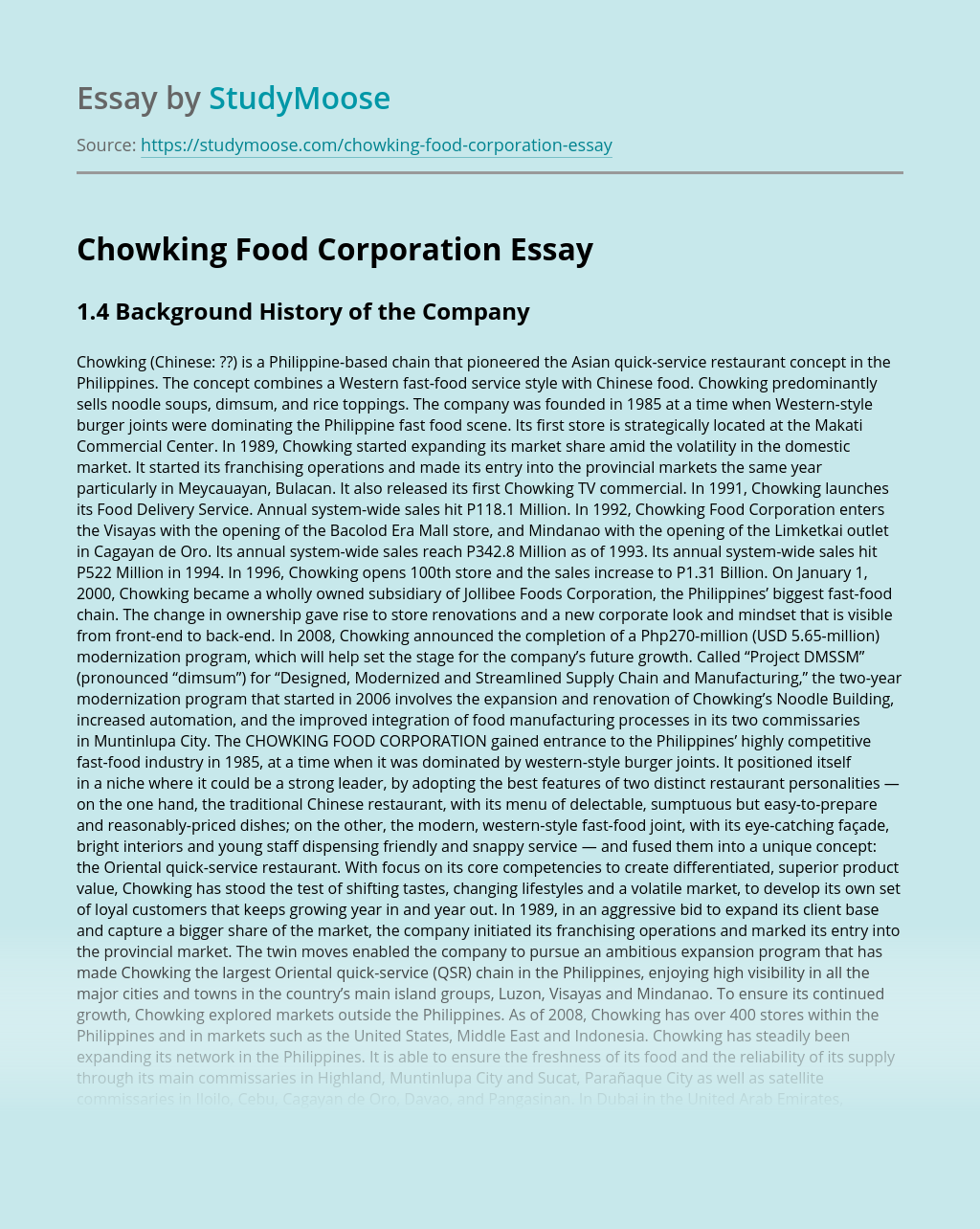