On the 15th day of the Chinese Lunar Calendar, individuals of Chinese descent throughout the globe will be celebrating the traditional Mid-Autumn Festival, also known as the Mooncake Festival. It is the third major celebration on the Chinese lunisolar calendar which incorporates elements of both a lunar calendar and solar calendar, which is not uncommon among Asian cultures. This year, the Mid-Autumn Festival took place on the 29th of September.

As it has always been in Malaysia, the festival was celebrated with merriment and involved the incorporation of lanterns, mooncakes, and the involvement of people from other cultural backgrounds as well.

In conjunction with this year’s celebration, this article will explore the history, origins and customs associated with the Mid-Autumn Festival. The Mid-Autumn Festival is traditionally related to moon-worship although its exact origins are lost to legends. However, researchers have been able to identify three possible legends relating to the festival.

The most prominent is the Chinese myth of “Chang’e and Hou Yi”.

As with all myths, there is more than one version of it. But the fundamentals of the story remain relatively similar. The story goes that hundreds of centuries ago, there were ten suns in the sky. The heat emitting from these suns were too much for life on Earth to bear. But one day, a warrior called Hau Yi was able to destroy nine of the suns due to his formidable skill in archery. The people across the land were grateful and the Queen of Heaven rewarded Hau Yi with an elixir capable of granting an individual immortality.

Unwilling to become immortal and have to leave his wife, Chang’e, Hau Yi asked her to keep the elixir safe. Now a hero across the nation, Hau Yi became a teacher to many men. Unfortunately, one of his students, Feng Meng, intended to steal the Elixir of Immortality. In an desperate attempt to prevent the elixir from falling into the wrong hands, Chang’e decided to drink the elixir. This resulted in her becoming an immortal and she floated to the moon and there she remained for the rest of eternity, thus becoming the Moon Goddess. From then on, people began to pray to Chang’e for fortune and safety.

And during the Mid-Autumn Festival, they make offerings of food to her. Notwithstanding, from a historical perspective, this practice can be traced back 3000 years to the Shang Dynasty during which the moon was worshiped under the believe that the practice would bring about another harvest year. However, it was not until the Tang Dynasty (618-907 A. D. ) that the Mid-Autumn Festival was considered as an official celebration of China. People of all backgrounds, from noblemen to simple farmers, would honour the moon by having food, drink, music and dance.

What is rather amazing is that this tradition has survived hundreds of years and is now celebrated across the globe. It is interesting to note that this has become a cultural festival rather than a religious festival. As such, instead of worshiping the moon in order to reap a harvest, most people use this festival to spend time with friends and family. As with all cultural festivals, there are several customs traditionally observed. The most prominent custom would arguably be the eating of mooncakes. According to a folk tale, mooncakes came about to pass secret messages during the Chinese rebellion of their Mongolians leaders.

The leader of the rebellion was send to have sent the message “Kill the Mongols on the 15th day of the eighth month” on strips of paper by hiding them in lotus pancakes which eventually came to be known as mooncakes. Regardless, this particular food has come to characterize the Mid-Autumn Festival and any celebration without mooncakes would be considered incomplete. Although traditionally containing a lotus seed paste, mooncakes now come in a variety of fillings. The numerous flavours include red bean paste, chocolate, green tea, ice cream, custard cream, cream cheese, and for the more adventurous, durian paste.

Mooncakes sometimes contain a salted egg yolk to symbolize the moon. Additionally, modern times have witnessed the emergence of more creative variations of the mooncake such as snow-skinned mooncakes and jelly mooncakes. Rarely homemade these days, mooncakes are usually mass manufactured by companies and are available in brilliantly packaged gift-boxes. This is due to the fact that mooncakes are extremely labour-intensive and time-consuming to produce. Another prominent custom of the Mid-Autumn Festival is the use of Chinese Lanterns.

It has always been common to see people, primarily children, playing with beautiful festive lanterns that emit a warm glow of light. Originally constructed from bamboo sticks and rice paper, lanterns have evolved to consisting of wires and transparent plastic sheets that come in a multitude of colours. Also popular these days are lanterns that are no longer lit by candles but instead by battery-operated LED lights. Times have truly changed. Nevertheless, it is gratifying to observe that modern societies still make it a point to maintain ancient cultural traditions.

Historically speaking, lanterns first came about around 2000 years ago as a means to communicate among the Chinese military. The tiny candle within the lantern would produce hot air, very much akin to a modern hot-air balloon, which allowed the lantern to float across battlefields. In modern societies however, lanterns are used to symbolize hope and goodwill. Additionally, it is not uncommon for communities to celebrate the Mid-Autumn Festival with lantern competitions. One traditional custom of the Mid-Autumn Festival that is scarcely ever practiced among modern Chinese societies is the gazing of the moon.

It used to be an important practice for Chinese people to gaze and marvel at the glorious beauty of the full moon as the Mid-Autumn Festival takes place at the time of year when the moon is at its brightest and roundest. During ancient times, people would hold ceremonies in memoriam of the moon and offer sacrifices to it. This was believed to bless people with prosperity and good fortune. Additionally, people who are unable to return to their families for the festival would gaze at the moon and hope that the moon would send their love and best regards to their family, thousands of miles away.

Besides eating mooncakes, playing with lanterns, and moon-gazing, family reunions are extremely important during the Mid-Autumn Festival. Family members from across the globe try their best to return to their parents’ home in order to enjoy a good meal together. They engage in excited conversations and rejoice in the company of each other. It is a warm and joyous occasion that is intended to maintain family ties. Traditional dishes are served and wine is poured for all to share. It is fascinating to note that the dishes served are usually said to symbolize something in particular.

For instance, pumpkins are considered to ensure good health, river snails promote good eyesight, and glutinous rice dumpling with sweet rice wine represents a “sweet family reunion”. In Malaysia, the Chinese make it a point to set the mood for the festival weeks in advance. Commercials and advertisements promote the upcoming festivities. Boxes of mooncakes are given to friends and family in order to strengthen ties and lanterns are bought in large quantities. Some families even offer prayers to their ancestors. And on the day of the festival, friends and families visit each other, usually bringing along a gift basket of fruits.

Communities composed of various races even come together to host celebrations. The occasion extends till nightfall and that is when lanterns are lit and sometimes, even fireworks brilliantly light up the skies. It never ceases to amaze me how an ancient festival is able to bring together families and communities with such ease. Despite the evolution the Mid-Autumn Festival has undergone over the past thousand years, the magic and allure of the celebration remains just as captivating. Here’s hoping that although the world will constantly modernize and reinvent itself, ancient traditions such as this are never forgotten. 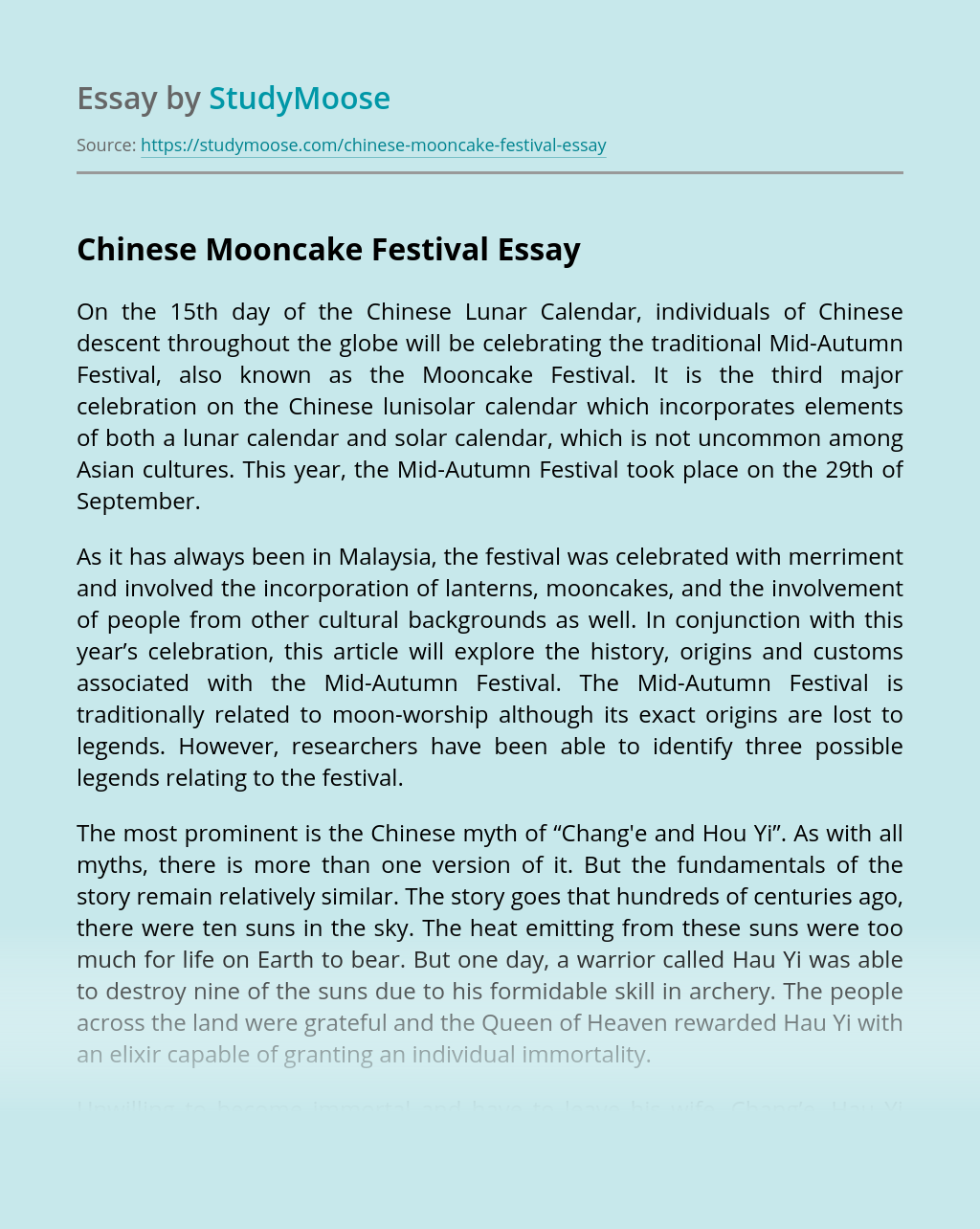 5 / 5 ( 1 vote ) Festivals is a celebration of life. These celebrations bring peace and joy to the humanity ,and break the monotony of life. Festivals are numerous in my country. We can divide festivals into three kinds; national, religious and seasonal. In connection with the first kind, the national festivals are...

Get Essay
A Famous Festival in Myanmar

5 / 5 ( 1 vote ) Thingyan festival – Water Festival – Myanmar New Year – in April The country Myanmar is Known as the “Golden Land” in the world since every pagoda is decorated and painted with gold. Myanmar is full of very colourful and deep rooted festivals. There are 13 most popular...

Essay on A memorable day

5 / 5 ( 1 vote ) India is a country of different communities belonging to different religions. So almost every day we see a festival being celebrated with joy and fun. The festivals make our life colourful and charming. There are some religious festivals, some are based on seasons and some are of national...

5 / 5 ( 1 vote ) The Mid-autumn is my favorite Chinese festival. It constantly falls on the 15th day of August, but this year is on 29th September. “This fantastic tale is a depiction of a Chinese family coming together and preparing to celebrate the moon with a nighttime picnic that welcomes their...

5 / 5 ( 1 vote ) Conflicts of Interest and communications between founding partners Ken West and Vivian Lees can lead to internal organisational issues for example misguided and confused management, which could potentially hinder the whole event. (2) Host Community and Event Location: Big day out at the moment have a negative relationship...

5 / 5 ( 1 vote ) Bretagne is found along France’s northern shore. Bretagne is also called Brittany and sometimes referred to as little Britain. It is a land of enchantment and wonders. It features rugged coastlines with some of the world’s most breathtaking views. It features more than 4,000 castles and medieval homes....