The Children's Hour with Billy Liar

My Practical work in April was for Option . It was a pre-war American feminist piece named “the children’s hour” written by Lilly Hellman.

It was written in 1934 but due to its controversial content was not performed until 1939. The piece is about an unruly young girl who spreads the rumour that the co-headmistresses at her private, all-girls school are engaging in a lesbian relationship; the townsfolk remove their daughters from the school and charge up a scandal.

The scene that I will be performing does not contain much in the content aspect but concentrates more on the atmospheric part when Martha announces her love to Karen.

Don't use plagiarized sources. Get your custom essay on
“ The Children’s Hour with Billy Liar ”
Get custom paper
NEW! smart matching with writer

My contribution to the performance was to play the part of Lily Mortar who, by refusing to go to court, is one of the main reasons that Karen and Martha are stuck in the situation that they are in. As a group, we performed the script staying close to the stage directions given by Lilly Hellman. My Practical work in June was for Option . It was a post-war British Drama named “Billy Liar” produced by Hall and Waterhouse. It was originally released in 1960.

The piece is about Billy Fisher, a lazy, wildly inventive, daydreaming, irresponsible clerk in North Country town possessed with an extraordinarily vivid imagination and an inability to tell the truth for more than two minutes running. Working as an undertaker’s clerk and unable to come to grips with the drab reality of his life–or with his own lack of direction–he treats his girlfriends and his family irresponsibly and spends his time retreating into that daydream world where he is the dictator of an imaginary country.

The scene that I performed sets the play and introduces the characters.

My contribution to the performance was to play the part of Florence Boothroyd who is Billy’s Grandmother. As a group, we performed the script whilst making the stage directions ourselves. I researched for information on both Billy Liar and The Children’s Hour so that I could have a better understanding of the two plays. The most useful materials concerning The Children’s Hour was the script and the research found about the writer and the play found on the internet. This information was useful as it helped me comprehend my character better and appreciate why the theatrical production was written.

The lie she tells ultimately destroys the lives of all whom she is associated with and shows the aftermath of the two women after the lie has been spread and Billy Liar follows a boys life for a short period of time concentrating on the web of lies he creates. The two pieces together in fact show two sides to a lie. The characters in Children’s Hour deal mainly with trying to sort out their lives after a lie has ruined them. In contrast, those in Billy Liar, namely Billy Fisher that I also studied, deal with sorting out the lies that he spreads trying to stay on top of them all.

The similarity of the society was the theme of lies but Little Polish Boy also had a strong theme of feminism through it. The culture of little polish boy was of feminists, sexuality and the morality of lies. The culture of Billy Liar was teenagers and the changes in society after WW2. Neither The Children’s Hour nor Billy Liar have conventions, as they are both naturalistic pieces. I have learnt about what life was like in certain situation in different times and countries from the research that my group and I did. From the performance aspect, I have learnt how to convey emotion through actions.

The Children's Hour with Billy Liar. (2020, Jun 02). Retrieved from https://studymoose.com/childrens-hour-billy-liar-5609-new-essay 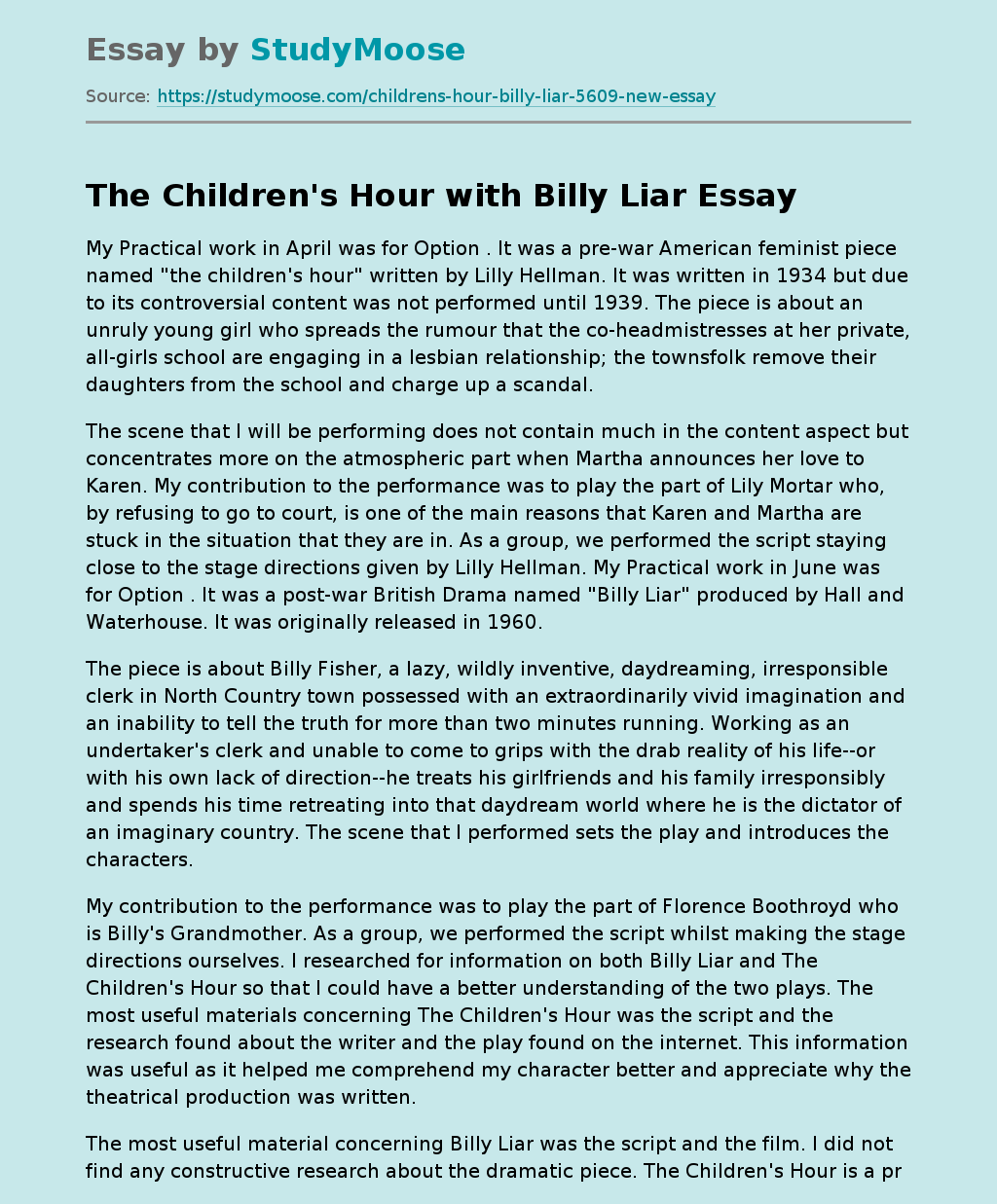