Many children have access to the Internet whether it is by computer, smartphone, tablet or other different types of electronics. Parents allow their children access to the Internet, but a majority of parents don’t have control over their child’s usage. There are websites such as Facebook, Twitter, Tumbler and Instagram, in which many children under the age of 15 and under have profiles. Social media allows people to interact with other users, whether it is people they know in person or even with strangers.

Don't use plagiarized sources.
Get Your Custom Essay on Children using social media Just from $13,9/Page

It allows people to share their lives with the online world and it all happens with the use of social media. However, there have been many reports of cyber bullying, privacy concerns and many other different crimes being committed on the Internet. Therefore, in today’s world the Internet is not a 100% safe and secure environment. On the Internet, there are thousands of pictures of alcohol, tobacco and sexual behaviors and every user has access to the inappropriate pictures.

With social media, teenagers have access to see adults give their thoughts about drugs, sex and alcohol and the opinion of those people may influence the minds of children. At a young age, children are affected and influenced by adults and even manipulated by adults on the Internet which makes it hazardous for them to have social media accounts. There are Internet users who spend all their time on the Internet, only to chat with anonymous strangers and there is a possibility of meeting sexual predators in the Internet.

Therefore, children that are fifteen years of age and under must not have social media accounts because social media has negative effects on their grades, impacts human behavior and also leads to privacy issues. Firstly, the use of social media negatively impacts the grades of teenagers. For this purpose, social media takes a lot of time out of time out of people’s lives. Internet users are browsing on the internet, logging on to Facebook and playing computer games for numerous hours. It is not only adults who have addiction problems, but many teenagers have the same problem.

Teenagers that use social media more than necessary have negative effects on their grades. Homework and studying has a huge impact in school grades. When teenagers spend numerous hours on the internet, they spend less time on activities that are important, such as spending time with family, daily chores or homework. On a survey questioning 500 teachers, 58% of teachers believe that smart phones and computers are the reason for children not being able to spell as well as former generations. (http://www. telegraph. co.

uk/education/educationnews/8142721/Social-networking-teachers-blame-Facebook-and-Twitter-for-pupils-poor-grades. html) Also, on a different survey on that article, 73% of teachers recommend that parents limit the amount of time a child is online and spend more time doing homework. Therefore, most teachers believe that social media is ruining many children’s performances at school. Indeed, children are learning new words every day and in social media websites, words such as “tomorrow” is being spelt as “2morow” or “message” as “msg”.

This causes confusion for children, as their vocabulary is being combined with “slang” terms. In summary, social media affects grades of children in negative terms and also impacts their human behavior. Secondly, social media impacts human behaviors of children. Without a doubt, social media is an environment where many children are influenced by many different people in numerous websites. In websites, such as Twitter and Facebook many users express themselves by posting pictures of drugs, alcohol and sex.

A majority of their accounts are public to any Facebook user and this allows children to witness explicit photos and gain more knowledge about the “real” world. There is a major chance that they will also become alcoholics, drug and sex addicts when they are adults. Therefore, the more knowledge they receive about the “real” world, the more influenced they are. In April 2011, students from El Monte Union High School District in Los Angeles (predominantly under the age of 15) were surveyed about their frequent use of social media and their drug and alcohol use.

Almost 30 percent of teenagers smoked and over half of them consumed alcohol at one point. (http://www. examiner. com/article/friends-social-media-photos-influence-teen-smoking-and-drinking) Additionally, most of those teenagers occasionally expose photos of themselves partying, drinking and smoking. Children that are under the age of 15 are being influenced by witnessing users on social media websites post inappropriate pictures. As a result, a majority of teenagers will also become alcoholics, drug and sex addicts due to influence from social media websites.

They will have temptations to use swear words, drink alcohol, experiment with different types of drugs and have a desire for sexual behaviors as a result of what they are witnessing in that certain point of their lives. In this case, social media negatively influences children’s behaviors and as a result will lead to privacy issues. On the Internet, there are many child users but also many sexual predators that search for children on the Internet. Children under the age of 15, use social media to connect and communicate with friends.

A majority of children also desire to meet people in the common age group, many of them would prefer the people they meet to be in the opposite gender. As a result, many sexual predators chose to create fake profiles to impersonate the lives of a young child in the common age groups of numerous amounts of children. In fact, sexual predators on the Internet manipulate children (mostly under the age of 15) to meet in person in an unsafe environment. In Southern California, a 21 year old male was arrested due to having sexual relations with two 13 year olds, one male and one female.

He met up with the children in person after meeting them online at a social media website. (http://www. mercurynews. com/crime-courts/ci_24108468/morgan-hill-southern-california-man-arrested-after-internet) As a result, many social media websites are not safe for children. There are pedophiles that can manipulate children, by posing as another child because of the fact that children under the age of 15 are gullible and still have to mature. As a conclusion, there are many sexual predators on the Internet that make it an unsafe environment for many children.

Due to negative impacts on grades, effects on human behavior and lack of privacy, social media accounts are not for children 15 years of age or under. Over usage of social media websites will lead children to not do well in school. They will be influenced by anonymous strangers and also meet different types of people and a possibility of meeting sexual predators. Another aspect of social media websites is that it influences teenagers in a negative way. Social media accounts are for people that are smart and responsible enough to acknowledge what is “right” and “wrong”. Children are 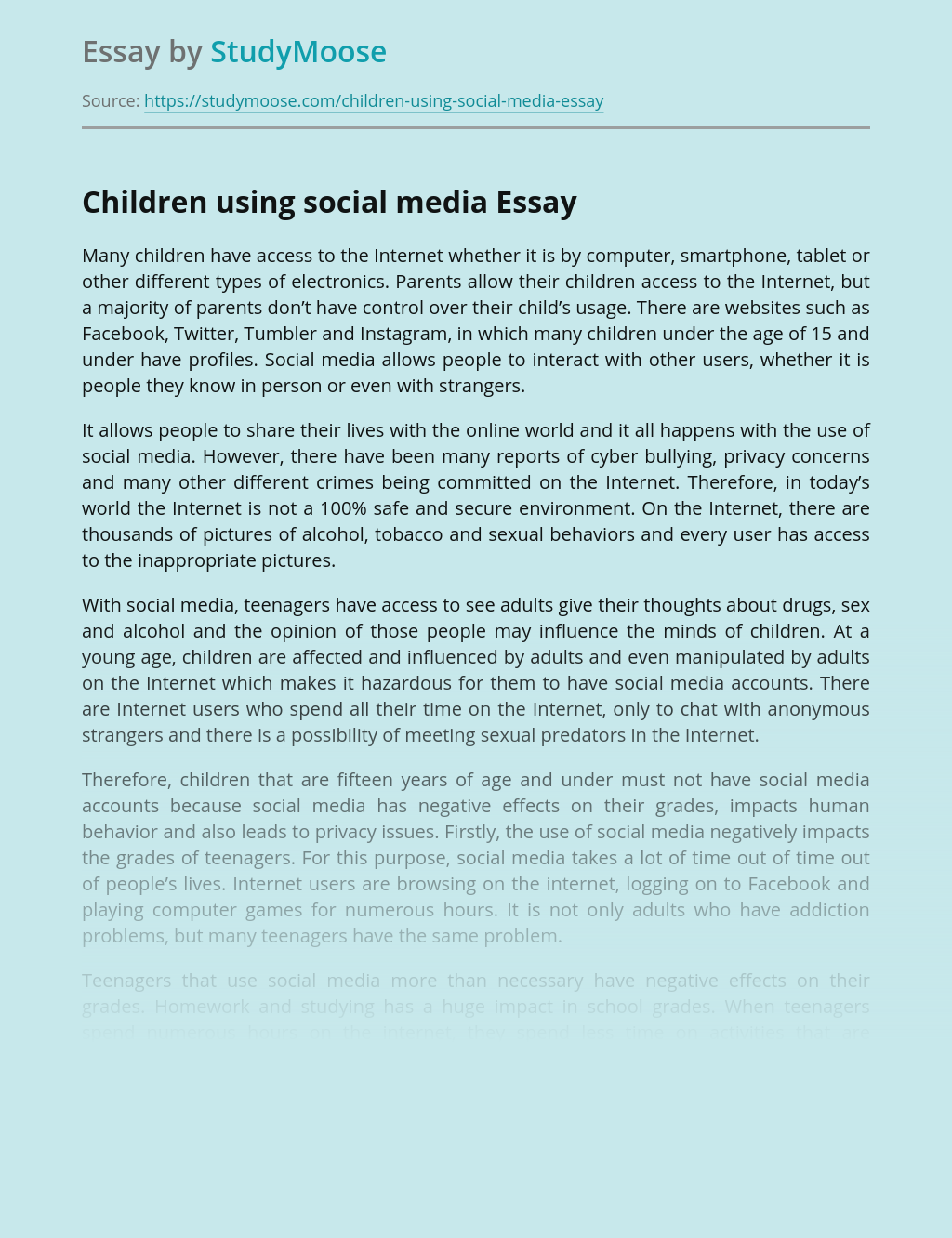 Alcohol With Charcoal As Substitute To Pentel Pen Inc

ACKNOWLEDGEMENT Whatever the researchers achieve in life, they are certainly the result of loving, affection, and caring people who have been through the years nurturing, realizing the dreams and aspiration. They are the people who have encouraged, bolster the self- confidence, and lift the spirit in times of confusion, helplessness, and vulnerability. They express kind...

Objective: The goal of this lab is to synthesize a Grignard reagent from bromobenzene and magnesium metal in diethyl ether. This same Grignard reagent would then be used to prepare a tertiary alcohol and then purify and characterize the product. Procedure: Refer to the microscale lab in pages 124-130 (15.1 and 15.2) in Modern Projects...

Group therapy has progressed a lot that the individual are discovering how to help themselves and others. Self-help groups are one of the most popular forms of group therapy. One of the most recognized self-help groups is Twelve step programs also referred to as A.A. Alcoholics Anonymous (AA) is an international organization produced to help...

The most basic current issue report is divided into four areas: Introduction- This section gives background information on the reason for the report and addresses possible solutions that can be offered to solve the problems mentioned. Problems- Problems arisen from the current issue. Possible Solutions- Possible solutions to solve the problems mentioned. * Recommendations- The...

Everyone should be able to go to social organizations for the community or school. Sometimes not everyone can attend though because of alcohol being served. Teens enjoy going to see their favourite bands play when they come near by. Some are held in bars which limit the people who can go. Lowering the drinking age...