The word ‘apocalypse’ refers to the destruction or the end of the world. It is also a theme which is often explored in science fiction films as it can arouse audience’s interest. At the same time, apocalypse is an important idea in the Bible, but the detail of the end of the world is not clearly mentioned, which makes the topic more mysterious, thus, science fiction films like to employ certain biblical elements to explore the idea in order to increase the mysteriousness of the films.

Don't use plagiarized sources. Get your custom essay on
“ ‘Children of Men’ and ‘Snowpiercer’ Films Analysis ”
Get custom paper
NEW! smart matching with writer

Children of Men and Snowpiercer are two apocalyptic science fiction films that employ the biblical elements to talk about the destruction of the world. Children of Men and Snowpiercer both use the biblical elements to represent the idea of purging human’s sin and the symbol of Adam and Eve. However, the idea of God’s salvation is discussed in different senses in two films. In Children of Men, the protagonist is actually the representative of Jesus who successfully brings salvation to humans, while in Snowpiercer, Wilford is a god-like figure which brings destruction to human instead of salvation.

In similarity, Children of Men and Snowpiercer both employ certain biblical stories to deliver the message that the destruction of the world symbolizes an act of purging human’s sin. Purging the sin is an idea originated from the Bible. In the Bible, the idea of purging sin is reflected in the story of the sinful cities Sodom and Gomorrah. In Genesis, the two cities Sodom and Gomorrah are destroyed by fire and sulfur because of their wickedness.

The destruction of two sinful cities represents an act of purifying sin. This biblical element is also demonstrated in Children of Men. In the movie, the world is full of crisis, including pollution, nuclear accidents, social division, and terrorist bombings, which are all created by human beings. All these human made crisis leads to human’s destruction. Although the world in the movie is not destroyed by fire like Sodom and Gomorrah, the world will be destroyed by human extinction because of severe human infertility. Those crisis signify human being’s sin as they are created out of human’s selfishness and cruelty. In this sense, this kind of destruction also represents the idea of purifying sin because the world in Children of Men is full of sin. In terms of Snowpiercer, the film actually employs the biblical story- ‘the ark of Noah’. In Genesis, the world will be destroyed by a great flood of water, which also indicates the act of cleansing human beings’ sin. In the film, the world is not destroyed by water but ice as human beings try to combat global warming through a science project. Destroying the nature is seen as a sin of human beings as it is actually created out of human’s selfishness. Therefore, the ice is a signifier of a great flood of water, signifying the cleansing of human’s sin.

Apart from that, Children of Men and Snowpiercer both use the biblical element to explore the symbol of Adam and Eve. Adam and Eve are two characters portrayed in the Bible. In the Bible, after the earth is created, Adam is the first human made to dominate the earth, then, Eve is also created from one of Adam’s ribs to be his wife or companion. They give birth to human beings and also bring civilization to the world. In Children of Men, human beings become infertile for no reason, there is not a baby born in eighteen years. Due to this, human face the crisis of extinction. However, a woman named Kee is pregnant. This is like a miracle given by God as she is the first pregnant woman in eighteen years. In the film, Kee successfully gives birth to a baby girl. For this, Kee serves a symbol of Eve. In the Bible, Eve is the first woman who gives birth to the first offspring of human beings. Although Kee is not the first one who bears a baby in the earth, she is the one who manages to give birth to an offspring of humans in eighteen years. As Kee is a signifier of Eve, the baby girl is also signifier of the first offspring in eighteen years, indicating the new life or new hope for human beings. In Snowpiercer, people on the train are the last survivors in the earth as other human beings are killed by ice. However, there is a rebellion of the lower class inside the train since the oppressed lower class lives in dreadful conditions while the elite lives in the front car own the best food and resources. At last, the rebellious people make an exploitation inside the train and at the same time, the train crashes on the snow mountain. All people on the train die except a girl and a boy. In the ending, they come out from the train, and find out that the earth is survivable. The girl and the boy are the signifiers of Adam and Eve because they are the only human beings who can give offspring to the earth. They are like start-up of human lives, brings civilization to the world again.

On the other hand, Children of Men and Snowpiercer both discuss the salvation of God, but they express different views towards the idea of salvation. In the Bible, salvation refers to ‘deliverance from sin and its consequences’, Jesus sacrifices his life in order to bring new hope for human beings. In Children of Men, Theo serves as a representative of Jesus as his name makes reference to the greek word « ???? », which refers to God. For example,there are several shots only focus at Theo’s feet, which is a reference to feet bathing and to the sandals of Jesus. In the film, Theo is the only one to accompany Kee and keep the baby safe, indicating that he is like Jesus who can give salvation to human beings. In the ending, Theo brings Kee to the boat, he sacrifices himself and dies. In this sense, his sacrifice is a signifier of Jesus’ salvation. Like Jesus , Theo successfully gives salvation to human beings as he manages to bring Kee and the baby to human project organization, which represents that he gives a new life or a new light for the crisis of human extinction. As for Snowpiercer, Wilford creates the engine and the train to save human beings from the ice age. As mentioned before, the train is like the ark of Noah, saving human beings from the end of the world. Thus, Wilford is a god-like figure who brings salvation to human beings. However, this is not a true salvation since Wilford creates the train out of selfishness and greed. His selfishness and greed could be reflected through his control of people on the train. As Wilford is the creator of the train, he is like a God who can dominate those human beings on the train. He creates class difference as he intends to own the power and save resource for rich people like him. Rich people on the front car can enjoy the best treatment and food, while poor people in the last car live in dreadful conditions. Poor people are fed with protein bars ; they are also oppressed and punished by Minister Mason. As a result, the class difference contributes to the rebellion of the people in last car since they want to fight against the oppression of rich people.It can be seen that it is not a true salvation as Wilford himself is not the chosen one who represents God to give salvation to human beings. On the contrary, he is a selfsh man who aims to own the god-like power by ruling people on the train. Therefore, Wilford is not a real savior who gives people ‘deliverance from sin and its consequences’. Instead, he leads to another destruction of human beings due to the severe class difference.

To sum up, apocalypse is a popular theme that is always explored in science fiction films as it can arouse their interest. Also, apocalypse is an essential topic in the Bible which is not clearly explained, so science fiction films often use certain biblical elements to talk about the idea of apocalypse so as to make the films more mysterious. Children of Men and Snowpiercer are two apocalyptic science fiction films that employ the biblical elements to explore the idea of apocalypse. Children of Men and Snowpiercer both use the biblical elements to represent the idea of purging human’s sin and the symbol of Adam and Eve. Nonetheless, the idea of God’s salvation is discussed in different senses in two films. In Children of Men, Theo is actually the representative of Jesus who sacrifices himself and brings salvation to humans, while in Snowpiercer, Wilford is a god-like figure which brings destruction to human instead of salvation. 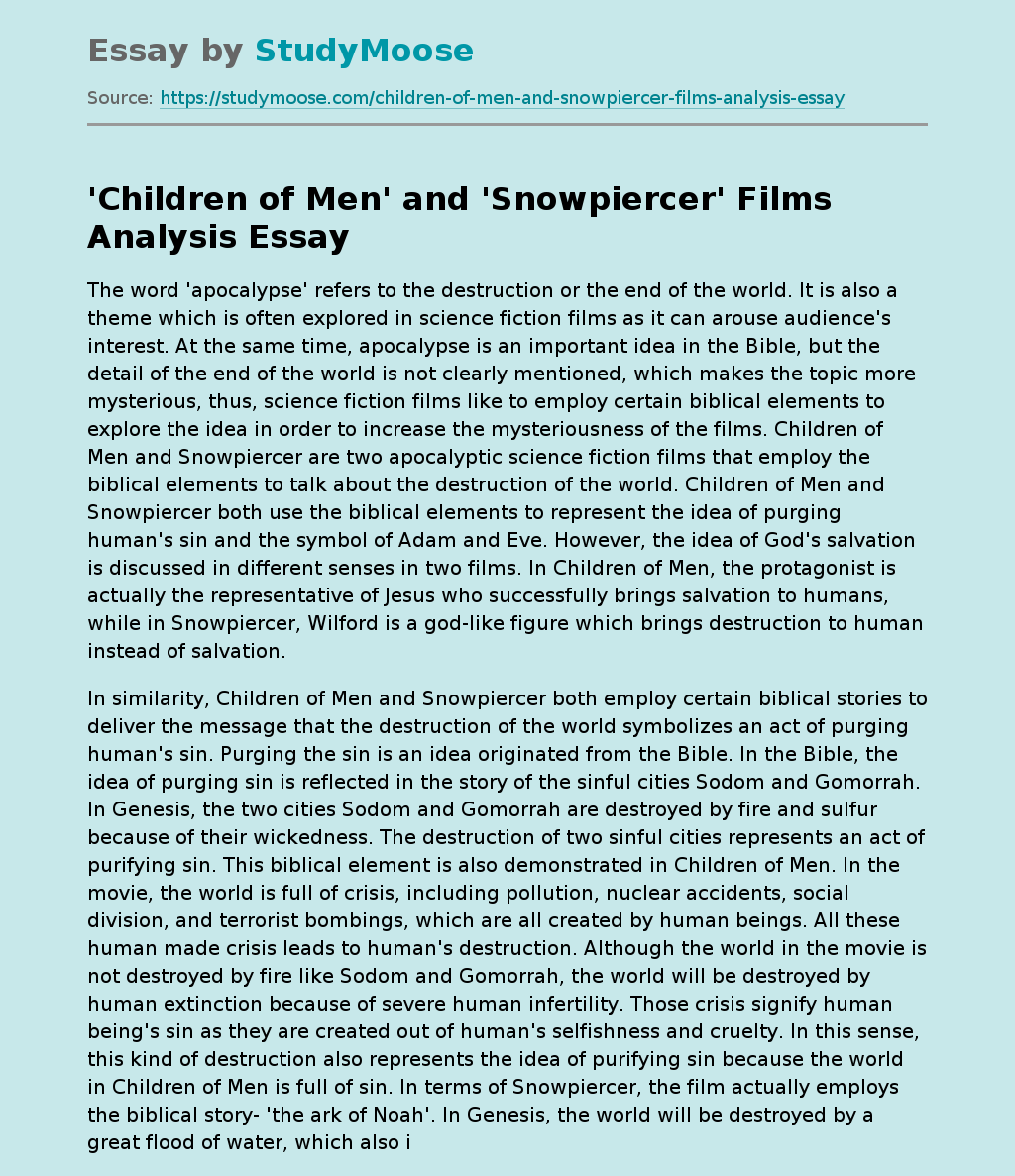