Mr Jaggers is a strange man who shows Pip, by no intention of his own, just how important a home life is. Jaggers is an enigma, a code which Pip cannot understand. He has no home life, and he is always obsessed by his work. His partner in business, Wemmick acts similarly to Jaggers when they are at work, but he almost has a split personality, i. e. two different lives, ‘the office is one thing and the castle another’. When Wemmick goes into the office he ‘leaves the castle behind’ and when he goes into the castle he ‘leaves the office behind’.

Don't use plagiarized sources. Get your custom essay on
“ Characters in Dickens’ Novel Great Expectations ”
Get custom paper
NEW! smart matching with writer

So Wemmick also shows Pip the importance of a home life, by being such a contrast to Jaggers.

Dickens is criticising the judicial system through Jaggers and Wemmick (although only Wemmick when he’s at work), by showing how corrupt it all is. If you know the right people, wear the right clothes, and look the right part, you are more likely to get away with it.

If you have money, then you are able to afford the top lawyers who can argue your case to let you off the hook, but also if you are a gentleman this makes you less reason to have been able to commit a crime (in the judge’s eyes), and you’ll get a lighter sentence than if you’re ‘common’. A perfect example of this is the Magwitch / Compeyson trial.

Although it was actually Compeyson that led Magwitch aside, because he knew the right people and because he was a gentleman, he managed to pass most of the blame onto Magwitch.

Compeyson got a sentence of 7 years, and Magwitch 14 years, just because Compeyson was a ‘gentleman’. Pip only returns to the forge when his sister dies and he returns for the funeral. He is distant with Joe, who is feeling very uncomfortable at the funeral. Here Dickens is satirising the Victorian funerals. Joe would have been happier to have ‘carried her’ himself with some ‘friendly ones wot come to it with willing harts and arms’.

In other words Joe knew that the importance of funerals is to be with family and friends, to remember the person, and celebrate their life, and yet he ended up having a formal procession just because ‘it were considered wot then neighbours would look down on such as it were wanting in respect’. Dickens is again mocking the aspect of what the neighbours would think, when in actual fact it shouldn’t matter what the neighbours think, it should have been what Joe thought was right. When Magwitch, the convict on the marshes reveals himself as Pip’s true benefactor, the only feelings Pip can have towards him are ‘repugnance’ and disbelief.

Pip has always believed Miss Havisham to be his true benefactor, and believed that she wanted him to be with Estella. Pip thinks that Magwitch is the lowest of low, and he doesn’t want to be associated with him. Although Magwitch thinks he’s made Pip into a proper ‘gentleman’, Pip still has a long way to go, he is still ‘ashamed’ to be seen with Joe, and judges people by their social class. Dickens also condemns the fact that money is so important. He shows that this is not true, and how even with money you are not happy, but that you are only happy with love, and friendship.

A perfect example of ‘money cannot buy happiness’ is Jaggers, he is one of the top lawyers, and charges a lot of money, but he has no life outside of work, he is lonely, and money has not helped him. Another example is Miss Havisham, because although she’s extraordinarily wealthy, she is not in the least bit happy. Pip sees how although Miss Havisham and Estella are rich, the thing that matters is love, and Pip sees that ‘money can’t buy your happiness’ through their unhappiness. Dickens is criticising the social classes in the Victorian days as everything depends on being a ‘lady’ or a ‘gentleman’. A perfect example of this is Estella.

She is actually the product of two criminals, and she should be the lowest of the low, but as she’s been brought up by Miss Havisham, who is extremely rich, but extremely unhappy, she teaches Estella to be harsh, cruel, and to have a heart of stone. Estella is a ‘lady’ from the outside, but she isn’t a lady on the inside. Pip starts to learn what really matters in life when he professes his love for Estella, and she announces that she is to be married to Drummle because Pip knows that even if she doesn’t love him, then she should at least not ‘encourage a man so generally despised’ who is an ‘ill-tempered, lowering, stupid fellow’.

This is totally selfless, because Pip is honestly saying it with only Estella’s interest in his mind. He learns to be selfless as he overcomes the fact that even if Estella doesn’t love him, then she should not love Drummle because he will treat her badly. Just before Miss Havisham set on fire she offers Pip if there is anything she can do for him. He has already learnt that seeking for yourself is not worth it, unless you have to, and he asks for money for Herbert and his father. The fact that he does this shows that he is becoming more altruistic, and he is starting to think more about others than himself.

As the brownie guides would say ‘put your neighbour before yourself’, this is exactly what Pip’s learning to do. Pip learns how to be tactful, and how sometimes there are things that people never need know. When Pip and Magwitch try to flee the country, Pip eventually realises that in Magwitch he sees a man that was only ‘meant to be’ his true benefactor, and that Magwitch need never know that the officer had taken the pocket-book, and that ‘his hopes of enriching’ Pip ‘had perished’.

By not telling Magwitch it shows that Pip has had some consideration of his feelings, even if he is lying to him. When Pip becomes in debt and ill, he awakens to find good, old ‘noble’ Joe looking after him. Joe teaches him that forgiveness is very important, and that you need to be able to forgive others, and love them deep down. Joe is a good example of a true gentleman as he is kind, loving, hopeful, forgiving, satisfied with little money, and happy with the things he’s got, and the opportunities he’s been given.

My conclusions from this are that Pip does learn what really matters in life. Pip eventually learns to be a proper gentleman, as he has to work for his money, which gives him satisfaction. He learns forgiveness as he forgives Estella for being so horrible to him, and he is kind, loving and patient. He also has the outward appearance of a gentleman, but he is much more of a gentleman now because he is a gentleman inwardly. He learns the most important lessons in life: ‘money can’t buy everything’ and ‘the best things in life are free’! 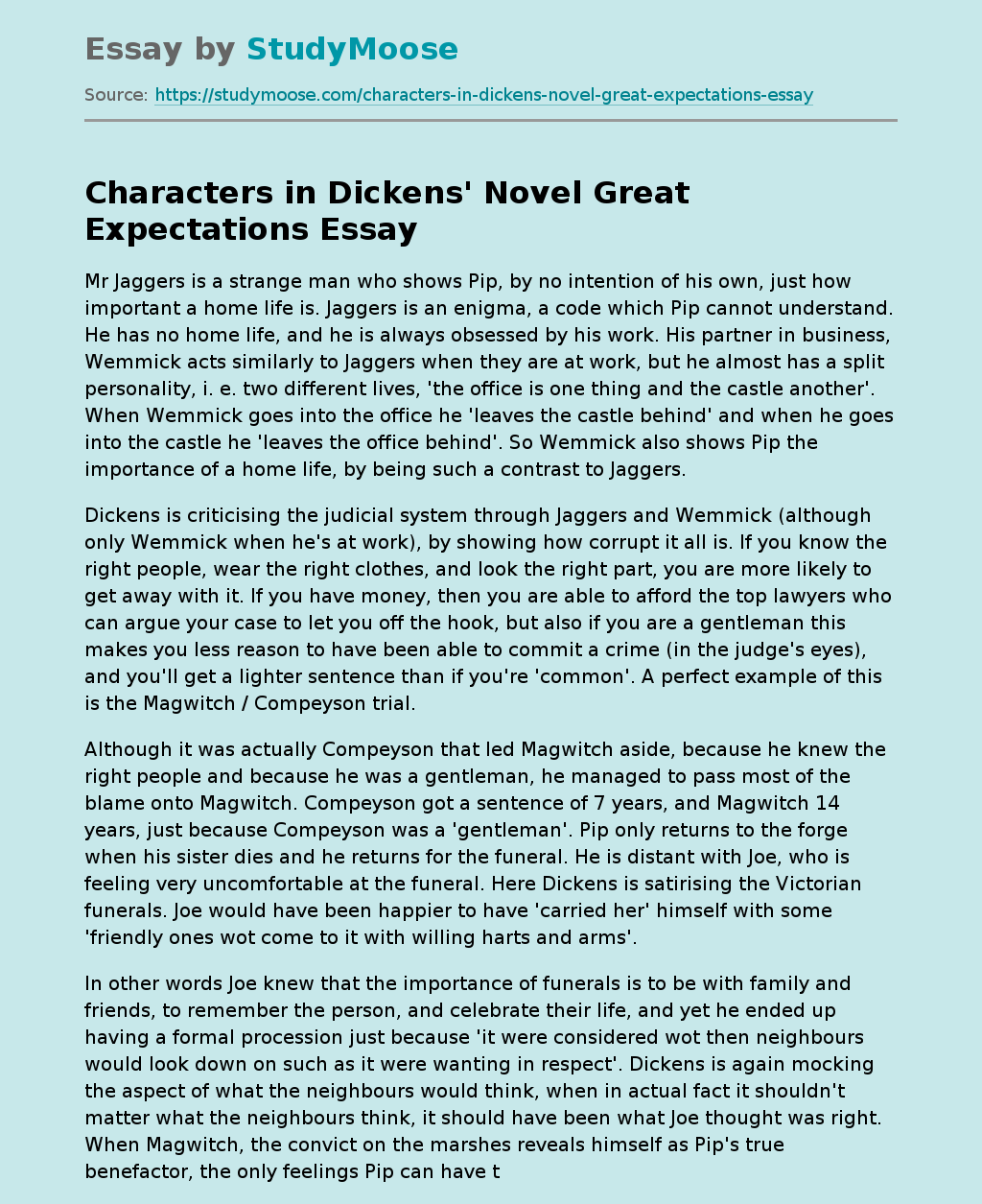