Dracula has been the source for nearly all plots relating to the vampire or gothic backgrounds, with the characters falling outside of the definition of human nature since the novel’s publication. ‘Human nature,’ is defined as, “the general psychological characteristics, feelings, and behavioral traits of humankind, regarded as shared by all humans.” In the novel Dracula, written by Bram Stoker, the Count shows many examples as to how he does not fall into the category of human nature. The Count is not classified as a member of human society due to his supernatural abilities that allow him to harm mankind in a such a way that other humans are not able to.

Don't use plagiarized sources. Get your custom essay on
“ Character of Dracula in Different Vampire Plots ”
Get custom paper
NEW! smart matching with writer

In Lipking’s discussion of Frankenstein, he recounts Rousseau’s notion of how society corrupts humankind; however, this argument could not be fully applied to Dracula, due to the fact that it is the Count’s supernatural abilities that corrupt him into a monster, and not from the corruption from society.

The Count’s supernatural abilities provide Dracula with unimaginable powers that fixate extraordinary amounts of evil capabilities into the Count’s possession. The Count’s powers included the ability of having the strength of twenty men, shape-shifting, teleportation, incredible speed and agility skills, as well as immunity to disease and aging. Unlike Frankentein, Dracula is depicted as an evil embodiment who merely exists to feed off of the blood of humans. He portrayed as a monster living inside of what appears to be the surface of a man.

Comparing Dracula against Frankenstein, who is seen as a monster, is actually man living inside of its monstrous surface. Dracula feeds off of the blood of humans, and must do so in order to achieve immortality. He is by nature a predator, and someone to be feared. In fact, his actions closely resembled those to a wild creature. John Seward recounts this incident with, “There was something so panther-like in the movement—something so inhuman, that it seemed to sober us all from the shock of his coming… As the Count saw us, a horrible sort of snarl passed over his face, showing the eye-teeth long and pointed; but the evil smile as quickly passed into a cold stare of lion-like disdain.” When Van Helsing and others experience Count Dracula at the house in Piccadilly, he surprises them by jumping into the room. While they were expecting this, they were not expecting to see him outside of his ‘human’ form. Dracula’s metaphysical capabilities led the Count to become a monster, rather than a part of human society.

Even though The Count did possess unearthly powers, this, however, did not make him invincible. Dracula also faced limitations as well, which included shape-shifting only during dusk, dawn, and the night; he cannot enter a place without being invited; having wild roses, the sunlight, and garlic limit his powers, and thriving off of the blood of humans is the source of his immortality and life. Dracula also had to sleep in Transylvanian dirt to recharge his ability to use his powers. Even with his limitations, Dracula still had powers that are not components of a human society. Without his limitations, Dracula would not have been able to spread his vampirism to other people. Dracula would not have been able to corrupt the human society if he had no powers or capabilities. 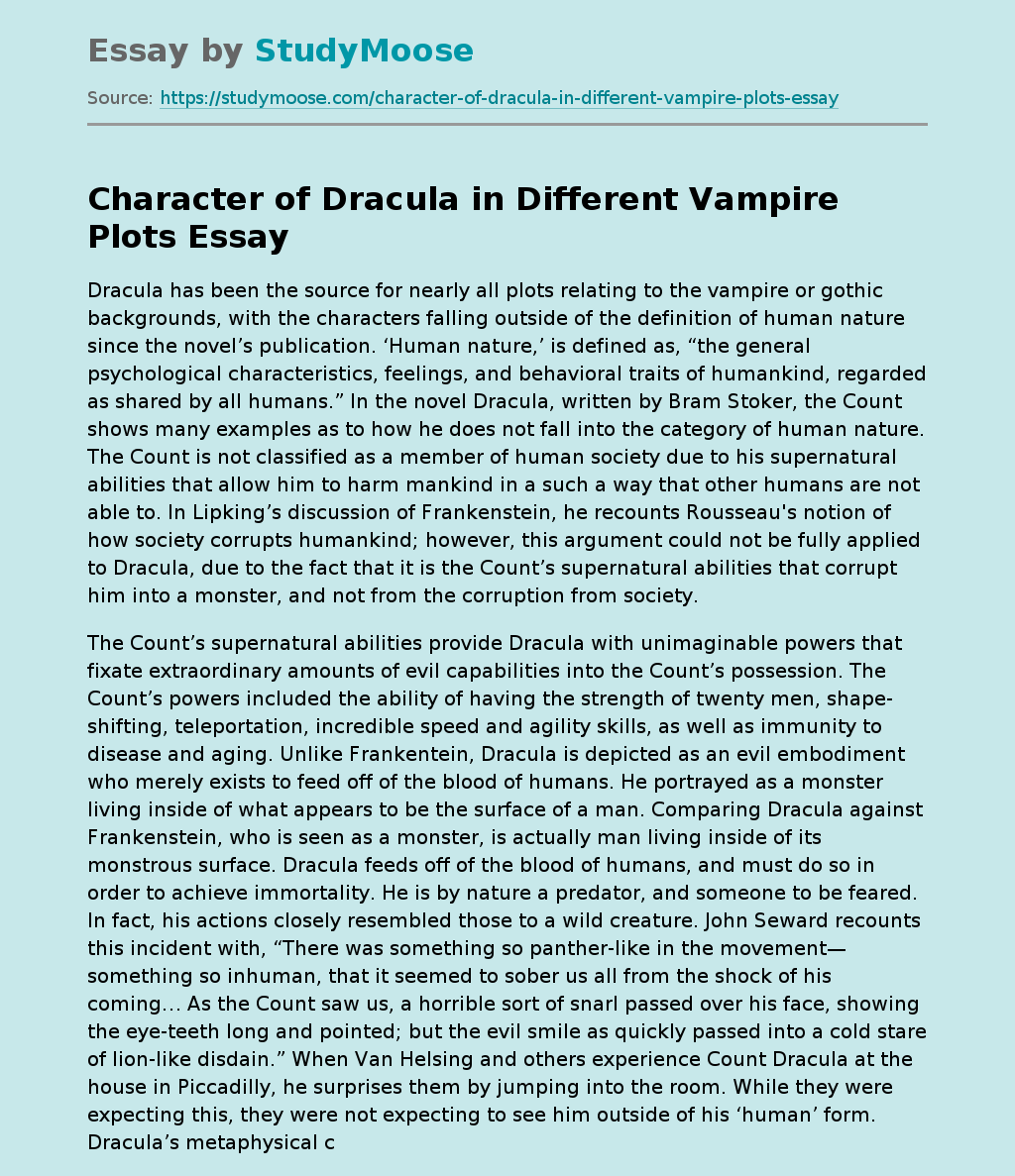