Character Needs in The Rivals

“The Rivals” by Richard Brinsley Sheridan is a comic play, and it has no true tragedy in it. So, no matter how it is produced, it is humorous. However, there are several characters and subplots that could be emphasized if “The Rivals” were to be produced as a laughing comedy or a sentimental comedy, and there are still other characters and subplots that would most appeal to a contemporary American audience. These will be discussed below.

First, a laughing comedy of “The Rivals” would not be complete without certain characters.

These irraplacible people are the servant Fag, Captain Absolute, and Lydia Languish–who is aptly named for her romantic dreams. Fag is such a run-around, informing his master of all sorts of things throughout the play, and getting himself into trouble in the process.

Similarly, his master, Captain Absolute, is busy maintaining two identities–that of Ensign Beverley for the sake of Lydia’s romantic notions and that of himself, until he finds out his father actually wants him to marry Lydia as well.

Last but not least, Lydia herself is quite the romantic, or at least she dreams she is. She wants to elope with Ensign Beverley, even after his true identity is revealed, and she weeps because her dream is lost. Of course, in the end she is joyous to be marrying her lover, even though he is not a poor Ensign.

A sentimental comedy needs some of the same characters, those being Lydia and Captain Absolute. However, such a production also requires Mrs.

Malaprop, Bob Acres, Sir Anthony, Julia, and Faulkland. Much of the comedy in this case comes from Mrs. Malaprop, whose incorrectly sophisticated speeches are always making her sound funny, but very hard to comprehend.

Bob Acres provides more comic relief, as he is convinced “The Rivals”  he can win Lydia’s love by fixing his hair and tidying himself. Next in like is Sir Anthony. This one is a serious character, until he finds out about his son’s dual identities. Then, he even goes as far as to question whether Captain Absolute is his son, and this is downright humorous. From then on, he is a merry character and funny at times. Julia and Faulkland are funny, too, because they remind the modern reader of a sitcom, in which there are many misunderstandings, but which ends “happily ever after.”

Next, there are several characters that would appeal to a contemporary American Audience, even today. These are Fag, Mrs. Malaprop, Lucy the maid, and Captain Absolute. As has been stated previously, Fag is an extremely humorous character, and his humor makes him likable and easy to relate to. Mrs. Malaprop is similar, although her sophisticated speeches could also make her frustrating.

In addition, Lucy the maid is very human. Most people, whether consciously or unconsciously, tend to keep track of what they have done for others. Lucy does this at the end of Act I when she counts up her score for being the go-between for all the lovers in the play. All the characters in “The Rivals” are likable, down-to-earth in a comical way–that is, they are not serious most of the time–and this makes them easy for a contemporary audience to identify with.

In conclusion, Richard Brinsley Sheridan’s “The Rivals” is a very adaptable play. It is a comedy in every case, but it is versatile as well. It can be performed or produced as a laughing comedy, a sentimental comedy, a short farse, or even a sketch of contemporary life in many cultures. This is an enjoyable play to read and would most likely be fun to watch and listen to as well.

Character Needs in The Rivals. (2017, Mar 15). Retrieved from http://studymoose.com/character-needs-in-the-rivals-essay 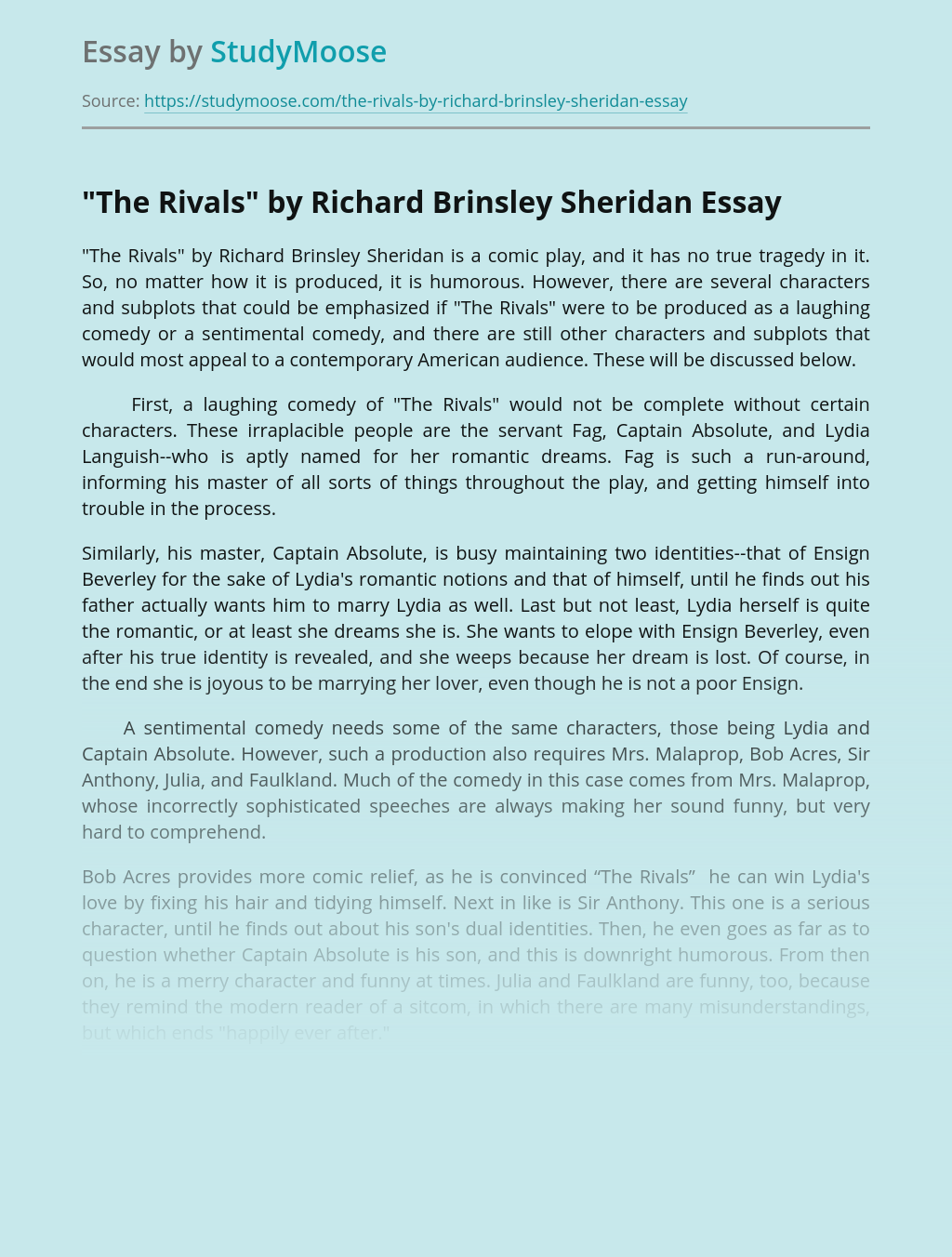 Don’t waste time
Get a verified writer to help you with Character Needs in The Rivals
Hire verified writer
$35.80 for a 2-page paper
Stay Safe, Stay Original