In William Shakespeare’s tragedy “Hamlet,” Prince Hamlet is an incredibly dynamic main character and the protagonist in this 16th century, Elizabethan times play. He is the son of Queen Gertrude and the late King Hamlet of Denmark, and the nephew of Claudius, who also marries his mother and murders his father for the throne. Hamlet’s fluidity through soliloquies as a character arranges him as a creative individual that handles his situations in ways so unimaginable that it keeps readers on their toes.

Don't use plagiarized sources. Get your custom essay on
“ Character Analysis of William Shakespeare’s “Hamlet” ”
Get custom paper
NEW! smart matching with writer

However, it also creates the foundation for dramatic events that led to his preventable death and the deaths of the entire kingdom. For instance, Hamlet is frequently indecisive throughout the play, and he hesitates his motives because he fears the penalties of his actions. Shakespeare created Hamlet as a round character that has broken the established definition of one-dimension characters by representing all their human difficulties and individualities. He is a tremendously enigmatic and complicated character who has a different perspective constantly.

Hamlet is a tragedy and a classic revenge play that emphasizes the complications that arise from love, death, sex, betrayal, mortality, deceit, madness, and revenge. Shakespeare’s intended message is that revenge and indecisiveness ultimately result in not only a personal tragedy for you but also others around you.

When his father, King of Denmark dies, Hamlet returns home to piece together the evidence that foul play unexpectedly caused his father’s death. The ghost of his late father visits to state that Claudius is the murderer and urges him to “revenge [Claudius’] foul and most unnatural murder” (1.

5.25) of Old Hamlet. The ghost explains to Hamlet that while he was asleep in his garden Claudius killed him by pouring poison into his ear, undoubtedly killing him. To Hamlet’s dismay his suspicion about his uncle is true. “O my prophetic soul! My uncle!” (1.5.40-41) Hamlet cries out. The ghost continues explaining that since Claudius became king, he has destroyed Denmark and the Gertrude he once knew and love, so abruptly after his death. But the ghost suggests that Hamlet “leave her to heaven” and let her guilty conscience destroy her (1.5.86-89). Throughout the rest of the play, Hamlet believes instinctively that Claudius murdered his father and hesitates to carry out his revenge by seeking further confirmation of Claudius’ guilt. He goes to extreme lengths to investigate his suspicion of Claudius to confirm it, so he creates an elaborate scheme intended to “catch the conscience of the king,” (2.2.536).

Moreover, after Old Hamlet is murdered, Hamlet’s mother Gertrude marries his uncle Claudius in an incestuous marriage causing Hamlet to despise all women. He was disappointed and sickened by his mother’s choice to marry his uncle two months after his father’s death, “Within a month, Ere yet the salt of most unrighteous tears Had left the flushing in her gallèd eyes, She married. O most wicked speed, to post with such dexterity to incestuous sheets!” (1.2.153-155). It is obvious the betrayal of Hamlet’s mother caused him to not trust women. Due to his mother’s betrayal, he decides the only option he had left to protect himself is to curse all women, “Frailty, thy name is woman!” (1.2.146). Hamlet has a strong dislike and distrust of women due to the personal betrayal he faced when his mother and his uncle Claudius’ incestuous marriage.

However, in the wake of his father death, Hamlet cannot stop questioning the meaning of life. In one of his soliloquies, he contemplates whether to commit suicide and escape his meaningless life or live with his fear of the afterlife. The world that Hamlet sees is in such a disaster that he his wishes “flesh would melt” (1.2.129). But then his thoughts of suicide began to change when he said his most famous soliloquy “To be or not to be-that is the question:/ Whether it is nobler in the mind to suffer/ The slings and arrows of outrageous fortune, / Or to take arms against a sea of troubles” (3.1.56-59). He decides that people do not commit suicide only for their fear of the afterlife (considering suicide is a sin to Christians) and “that they dread of something after death” (3.1.78).

Lastly, Shakespeare depicts how humans take revenge into their own hands as having epic and disastrous consequences, as Hamlet’s obsession with revenge, and his indecisiveness ultimately results in not only his tragedy, but the entire whole kingdom as well. Personal traits and inner struggles that Hamlet possess contributes to his uncertain behavior towards revenging his father’s death when he had the chance. Furthermore, Hamlet’s doubts in his determination and over analyzes of all things around him caused him to be an indecisive person which ultimately caused to his own preventable death. 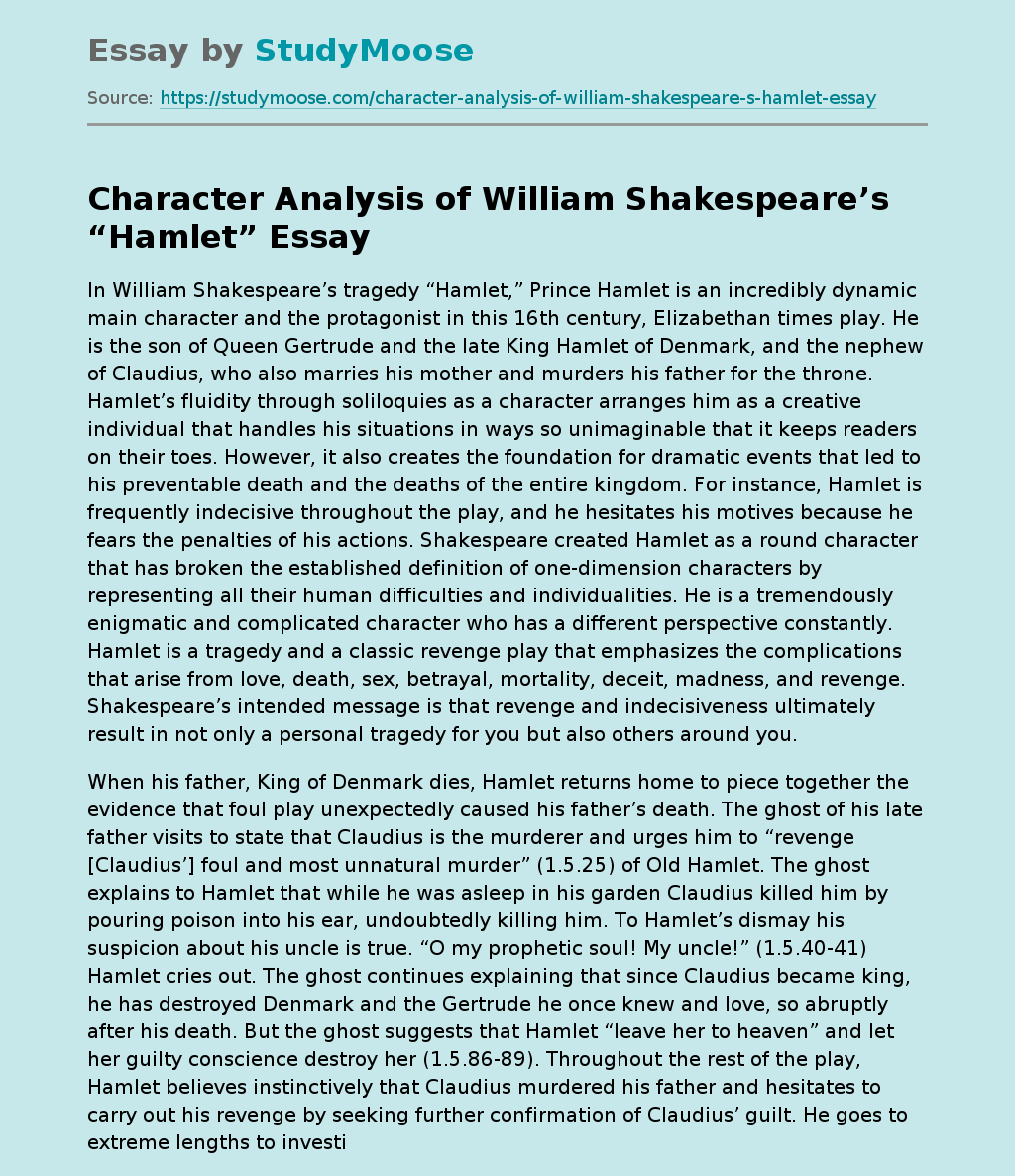