The Book of Negroes by Lawerence Hill started as a story of the capture of a West African girl and her journey to become a slave. Her traumatizing experience was written with a desperate tone that was achieved through the use of literary devices such as metaphors and alliteration. Emphasis was put on the conflict between Aminata and society which helped to develop her as a hopeful character. “We walked for many suns, growing slowly in members, lumbering forward until we were an entire town.

Don't use plagiarized sources.
Get Your Custom Essay on Character Analysis of Aminata: Book of Negroes Just from $13,9/Page

Each time, people swarmed out to stare at us. Initially, I believed that the villagers were coming to save us.

Surely they would oppose this outrage. But they only watched and sometimes brought out captors roasted meat in exchange for cowrie shells and chunks of salt. Some night when they had us lie down in fields, our captors paid village women to cook for us-yams, millet cakes, corn cakes, sometimes with a bubbling peppered sauce. We ate in small groups, crouching around a big calabash, spooning out the hot food with the curved fingers of our right hand.

While we ate, our captors negotiated with local chiefs. Ever chief demanded payment for passage through his land.

Every night, our captors bartered and bickered well into the evening. I tried to understand, in the hope of leaning something about where we were going and why” (p. 34, Hill). In this quotation, Aminata’s journey is described with a bleak and demoralizing tone. The journey of Aminata and her hostages lasted “for many suns” and wore down their hope for freedom and their faith in humanity.

The hostages continued “lumbering forward” as “an entire town of kidnapped peoples,” with no hope of being saved. When “people swarmed out to stare at us … we initially believed that the villagers were coming to save us. ” Eventually the captives realize that the people are only interested in making exchanges with their captors.

This leaves the hostages with the forlorn realization that no one would make an attempt to liberate them. The captives were demoralized further when they “crouched around a big calabash, spooning out hot food with the curved fingers of our right hands. ” As captives, the native West Africans were treated as less than human. Like animals, they were forced to gather around a bucket of food and eat without tools.

The lack of respect and dignity given to the captives corrupted their sense of self-worth until there was little left but the instinct to survive. Literary devices are a key element in setting the tone of this novel. As the captives were continuing they were “slowly growing in number… until we were an entire town of kidnapped people. ” This metaphor emphasizes the number of prisoners the captors have taken hostage and that the group goes far beyond Aminata. It also emphasizes the amount of power the captors have other the captives.

Even though the captives outnumber the captors, the captors are still capable of preventing any rebellion and power within the hostages. Another literary device that highlights the hopeless situation of the captives is parallel structure. On their journey they “passed village after village, and town after town. ” The us of parallel structure creates a sense that the journey of the slaves is perpetual and induces the feeling that the slaves are stuck on a ceaseless journey. This also contributes to the hopeless mood of the novel; with no end in sight the slaves find little to look forward to.

Although the captives lose hope in their future, Aminata manages to keep a part of herself hopeful and this is essential to her characterization. Aminata knows that there is a very small chance of escaping, but she also knows that if she has more knowledge of the captor’s plans, she has a better chance at freedom: “Every night I heard the captors barter and bicker well into the evening. I tried to understand, in the hope of learning something about where they were going, and why. ” This also demonstrates her thirst for knowledge. Growing up Aminata strived to learn reading and writing and any other skills she could.

She does not let go of this part of herself even in her futile situation. As well as being hopeful and clever, Aminata proves to be innocent and naive. While travelling through villages she believes “the villagers were coming to save us. Surely they would oppose this outrage. ” But Aminata eventually realises that the villagers are not interested in freeing the captives. The only concern the villagers have is to make deals with the captors. Her ideals, that the people of her country would band together to bring a stop to their exploitation, are crushed and strips her of her innocence on her journey to slavery.

Aminata finds herself in many conflicts with many different elements. One example is the conflict between her and society. Society viewed Aminata and her fellow prisoners as less than human and with little value. The slaves were treated like animals, “people swarmed out to stare at us”. They are seen as another species and not as people with intelligence and skills. But contrary to the beliefs of the society, Aminata is an intelligent and skillful girl whose thirst for knowledge is never put to rest. She continues to try “to understand the chiefs, in the hope of learning something.

” She also knows how to read and write which is considered extremely valuable in her culture. But because society views slaves as non humans who are not capable of being intellectual, Aminata’s capabilities are not seen by others and she is continual seen as an inferior. The Book of Negroes tells a story about the degrading experience many had to go through because they were seen as inferior. This degradation is apparent through the demoralizing and bleak tone. But Aminata manages to keep hope and a clear head and provide a beacon for herself and others around her.

She continues to expand her horizon of knowledge and aspire to better herself. Although she is faced against the power or society, Aminata holds strong to herself and carries on. Her story is told with the use of literary devices such as parallel structure and metaphors to emphasize the desperation and inadequacy of her journey. She manages to look past all the horrors that surround her and hope for a better future, and perhaps with her strong will and knowledge she will achieve this someday. 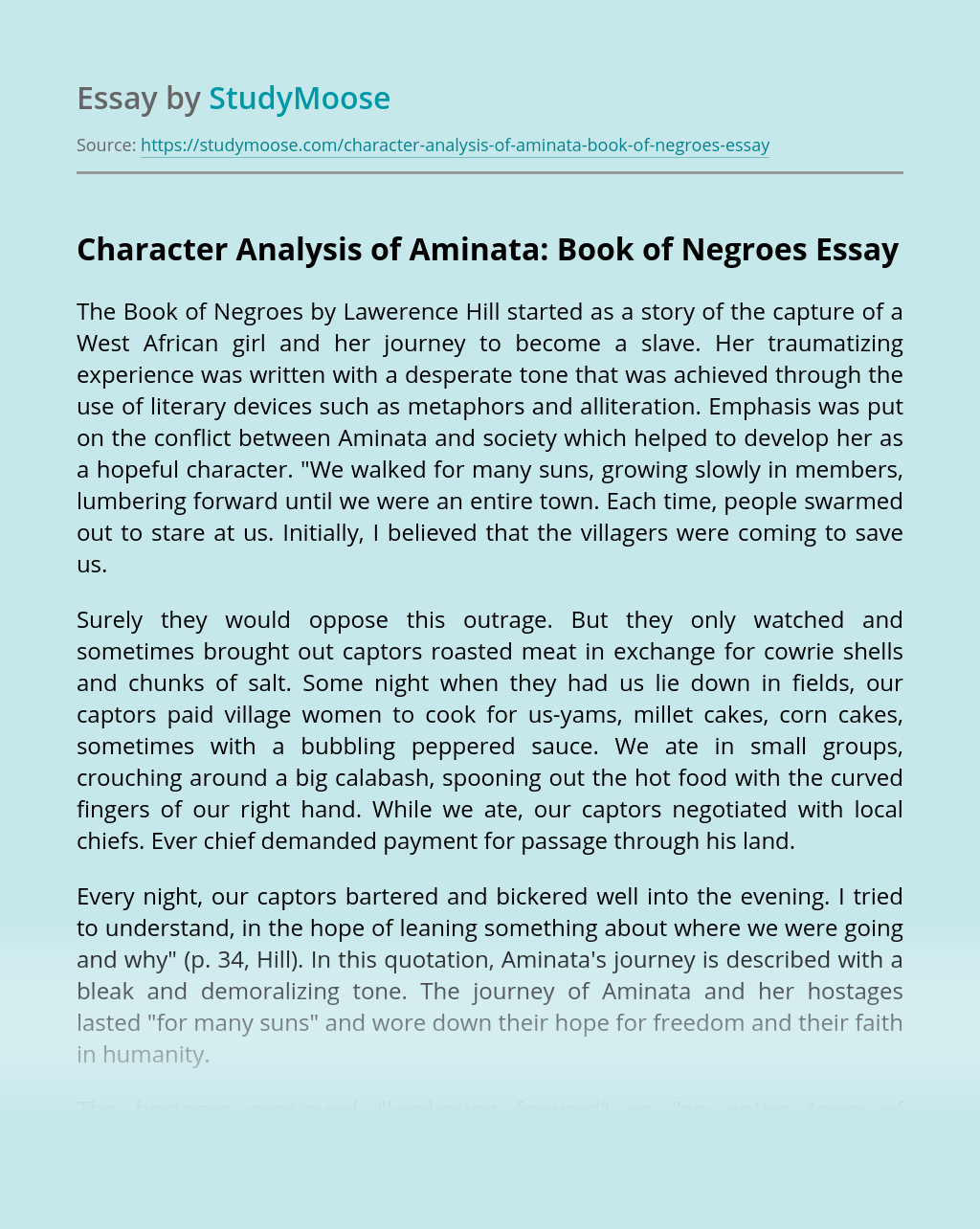