What comes to mind when the idea of “Romantic Literature” enters your head? Immediate imageries consisting of two lovers, a rose, or even a starlit sky may come to mind. In Mary Shelly’s Frankenstein, she disproved these imageries by creating her own scenario with grotesque images and lonely characters. Many have overlooked this novel as a romantic literature but it is actually one that contains the most elements of a romantic literature. Romantic literature emerged through a movement called Romanticism.

Don't use plagiarized sources. Get your custom essay on
“ Celebration to Individualism in Mary Shelly’s “Frankenstein” ”
Get custom paper
NEW! smart matching with writer

Romanticism can be defined as a movement in art and literature that revolted against rigid social conventions. In Frankenstein, Mary Shelly stresses the importance of individualism in Romantic Literature by developing various narratives of the story to generate perspectives of the same environment through different narratives.

Robert Walton begins the novel through an epistolary frame for the actual story to build on. We learn that Walton is on a journey to venture to an area where no man has gone before and is also in search for a close companion.

Although he is amongst a huge crew of men, he felt as if he was on the voyage by himself. He narrates the story through several letters to his sister until we learned that he encountered a new friend, “Victor Frankenstein”. Frankenstein then began to tell his story as the narrative switched from Walton to Frankenstein, the main narrator of the book.

As the story shifts to Victor Frankenstein, we begin to understand his life story as an individual that was much isolated from everyone else.

With the congregation of his life studies, Frankenstein was able to bring life or artificially gave birth to a grotesque monster. At first he was proud of his work but he later abandoned the creature due to its hideous looks. The monster proceeds to kill the people that are closest to Victor in his life, leaving him totally alone. Though torn by remorse, shame, and guilt, Victor refuses to admit to anyone the horror of what he has created, even as he sees the ramifications of his creative act spiraling out of control. Frankenstein then finds himself next to the monster in a cave as the monster decides to describe the loneliness he had felt ever since he was “born”.

The monster that Frankenstein created began narrating his life and the cruelty he had to endure alone. It is born eight feet tall and enormously strong but still has a mind much like a newborn. Abandoned by his creator, it was confused as it tried to integrate himself into society, only to be shunned universally. Looking in the mirror, he realizes his physical grotesqueness, an aspect of his being blinded society to his initially gentle, kind nature. Seeking revenge on his creator, he kills Victor’s younger brother. After Victor destroys his work on the female monster meant to ease the monster’s solitude, the monster murders Victor’s best friend and then his new wife. It was once in a gentle spirited nature, it had become angry and violent as it remained in solitude.

The emphasis on the individual’s expression of emotion is displayed through out the novel. The development of the characters in the story is presented by each character alone. The split narratives of these three characters allowed the story to unravel all the mysteries that the other narrators left out. Robert Walton, Victor Frankenstein, and the monster isolated themselves from others as each one told their own story. The celebration of individualism in the novel permitted a better understanding of each character individually as each one of them are left alone in the end. 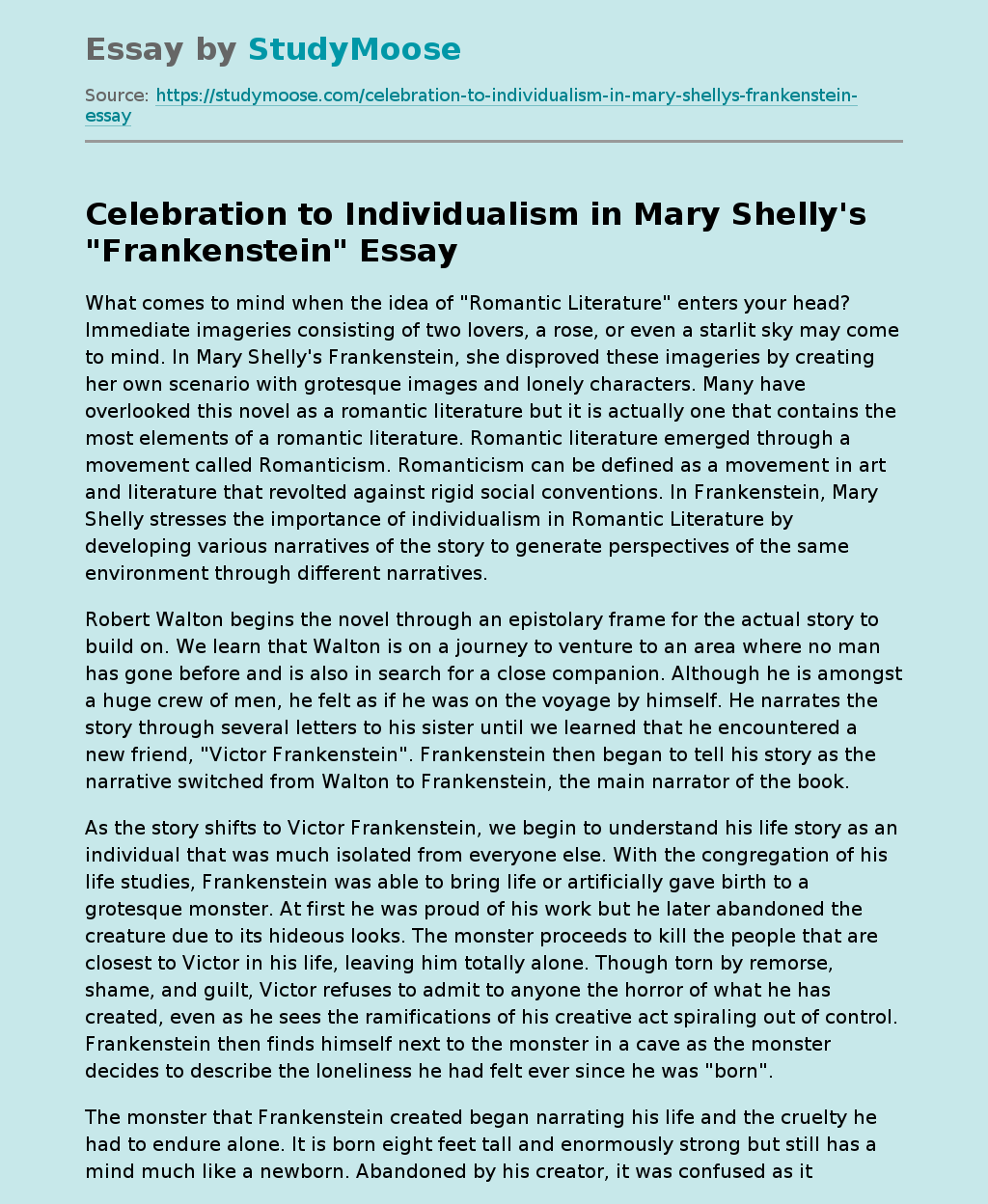