Causes Of Video Games To Be Popular

People around the world spend a massive hours weekly playing video games. But the question is what has made video games very appealing to audience? Why are they so popular?

First of all, what makes capitalism so appealing to people is very similar to the success of video games. Capitalism and video games have attracted most primitive of human desires such as greed and murder. In addition, capitalism attracts people interest and need to build any kind of success they desire.

Turn in your highest-quality paper
Get a qualified writer to help you with
“ Causes Of Video Games To Be Popular ”
Get high-quality paper
NEW! AI matching with writer

It also opens up a free society in which business are owned and run for profit by individuals and in which individual controls every single outcomes for their own success. Video games have the same attraction to people but focus more on the individuals hidden dreams. There is always times where some people want to escape from reality and go into their own world. So, as long as there is such a need for people to escape reality the video games production will continue to grow to satisfy their need.

Secondly, some video games are designed to be really difficult which makes players achieve small accomplishments and force them to keep playing. Role-Playing is an example of some ”hooks” which are built into video games with the purpose of making them ”addictive”. ”Role-playing games allow players to do more than just play – they get to actually create the characters in the game and embark on an adventure that’s somewhat unique to that character. Consequently, there’s an emotional attachment to the character, and the story makes it much harder to stop playing.

”1 Unlike other games, Online Role-Playing Games can be addictive because the is no ending.

Lastly, video games are popular because it allows players to try out different characteristics, a new identity during a game that they would ideally like to be. Also, it makes them feel better about themselves if they act it out. This include playing a good character, a villain or a different gender. “When somebody wants to feel they are more outgoing and then plays with this personality, it makes them feel better in themselves when they play,”2 explained lead researcher from the University of Essex in the UK, Dr. Andy Przybylski.

Video games allow people to try on different roles, characters, and different characteristics which they ideally would like to have and which they feel related to in a way. Some feel better about themselves if they acted out a new identity during a game.

Causes Of Video Games To Be Popular. (2016, Aug 16). Retrieved from https://studymoose.com/causes-of-video-games-to-be-popular-essay 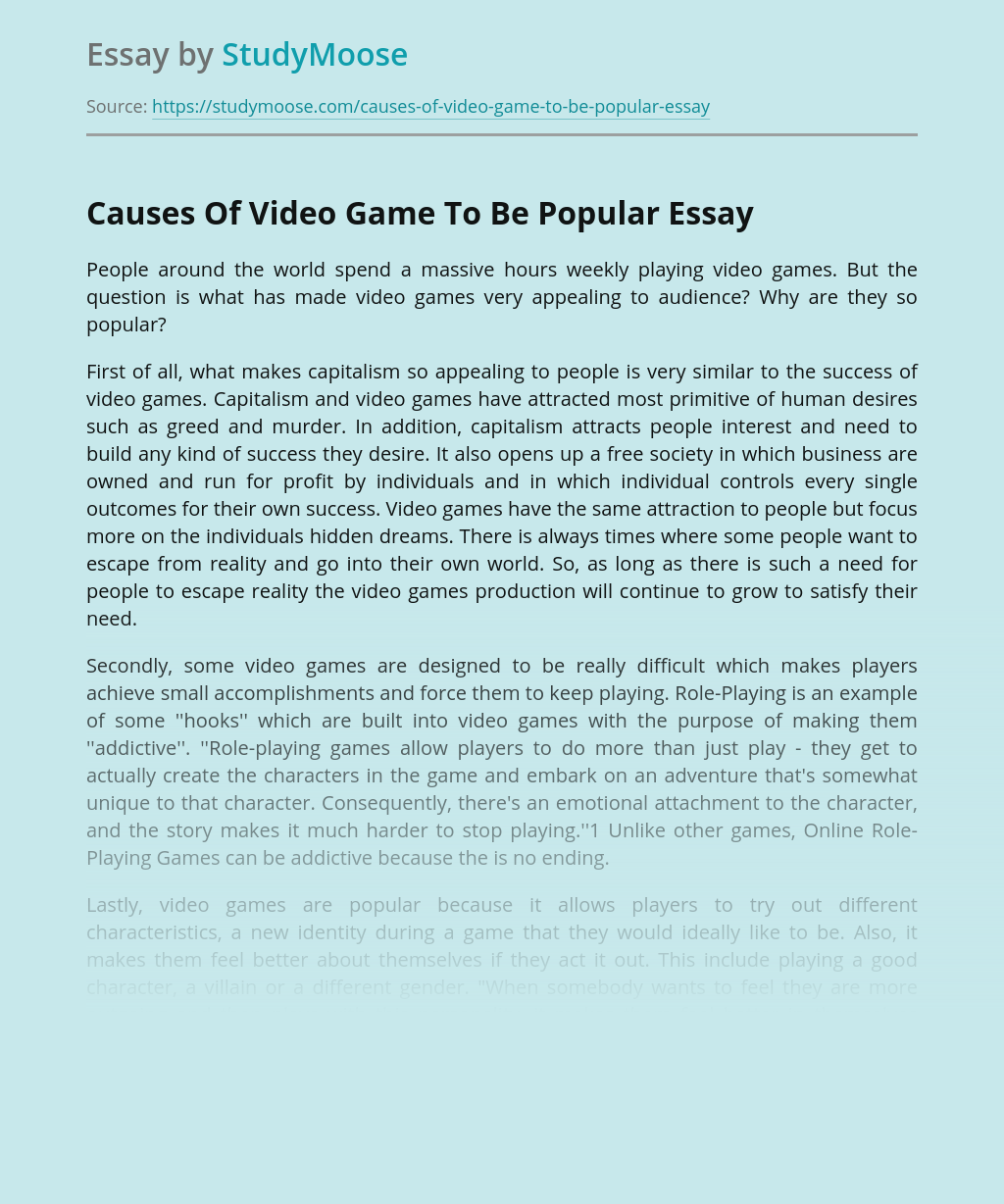 Turn in your highest-quality paper
Get a qualified writer to help you with
“ Causes Of Video Games To Be Popular ”
Get high-quality paper
Helping students since 2015
Stay Safe, Stay Original