The cash rate and other rates

The monetary policy reserve is under the control of the Reserve Bank, not the government. Thus, in Australia at least,, monetary policy should not be seen as an alternative to fiscal policy, as the latter is obviously under the control of the government but the former is not. (Mc Taggart & Findlay& Parkin, 1999) In practice we have seen in recent years within the of 2-3% over the business cycle, over the business cycle – a target which has been achieve that target have been market operations which alter the cash receives (Mc Taggart & Findlay& Parkin, 1999)

It has already been emphasised that in order to attain the requisite level of market interest rates, central banks make use of various monetary policy instruments at their disposal.

Don't use plagiarized sources. Get your custom essay on
“ The cash rate and other rates ”
Get custom paper
NEW! smart matching with writer

Two types of policy instruments can be distinguished, namely indirect measures and direct measures. Indirect policy (market oriented) measures are actions taken by the central bank whereby it achieves its monetary policy aims by encouraging market participants to take particular actions as regards their lending and borrowing behaviour as a result of price and interest rate incentives or disincentives brought about in the financial markets.

More particularly these incentives or disincentives arise out of technical intervention by the Central Bank in the various financial markets involving the buying and selling of specified financial claims such as government stock, Treasury bills, bankers’ acceptances and foreign exchange in order to influence prices and therefore interest rates and exchange rates. (Sloman& Norris,1999)

Direct (or non-market oriented) policy instruments refer to those measures taken by the central bank that seek to attain the aims of monetary policy by means of certain rules prescribing the behaviour pattern of banks and possibly other financial institutions.

These instruments are usually associated with a suspension of market forces, involving either rigid behaviour rules or the fixing of certain variables. If the relevant market participants do not adhere to these prescriptive rules, they may be liable to prosecution or at least certain penalties.

Examples include instructions sent to banks under which the latter are requested not to exceed a certain amount of lending to domestic private sector borrowers over a specified period, and instructions that banks must not quote interest rates above or below a certain maximum or minimum level on their various credit and deposit facilities made available to customers. Exchange control regulations also form part of the group of direct monetary policy instruments. Nevertheless, as already indicated, direct instruments of monetary control have been used by most countries in the past.

They have a superficial attraction in the sense that on the face of things they seem able to achieve given quantitative targets for such as the extension of bank credit. However, they are likely to have serious drawbacks since they tend to be partially ineffective, and they are not conducive to gains in economic efficiency. Credit ceilings, the most common direct instrument, tend to be inefficient, while curbing competition among banks in the granting of credits.

In addition, direct monetary controls tend to spawn yet more controls; there is a tendency for administrative controls to multiply as the authorities try to thwart attempts to circumvent the initial controls. This leads to disintermediation of credit out of the formal banking sector; in other words investors who are so-called ‘primary lenders’ start to bypass the banks by lending directly to the so-called ‘ultimate borrowers’, rather than holding deposits with the banks who then extend credits.

This in turn means that targets for aggregates such as banking lending, that superficially appear to have been achieved, in reality only mask a declining share of official financial sector activity within the economy. (Mc Taggart & Findlay& Parkin, 1999) The adoption of indirect or market-oriented instruments of monetary policy brings with it a number of advantages. It can depoliticise the allocation of credit and reduce the protection of existing large financial institutions by fostering greater competition in the banking sector.

Greater competition tends to decrease the cost of banking services, and fosters the re-integration of the informal with the formal banking sector, by encouraging the process whereby “primary lenders” place their funds with banks rather than try to lend directly to “ultimate borrowers”. In general the use of indirect instruments of monetary policy enables a central bank to better manage monetary conditions in the economy as a whole, thereby rendering monetary policy more effective. (Mc Taggart & Findlay& Parkin, 1999) 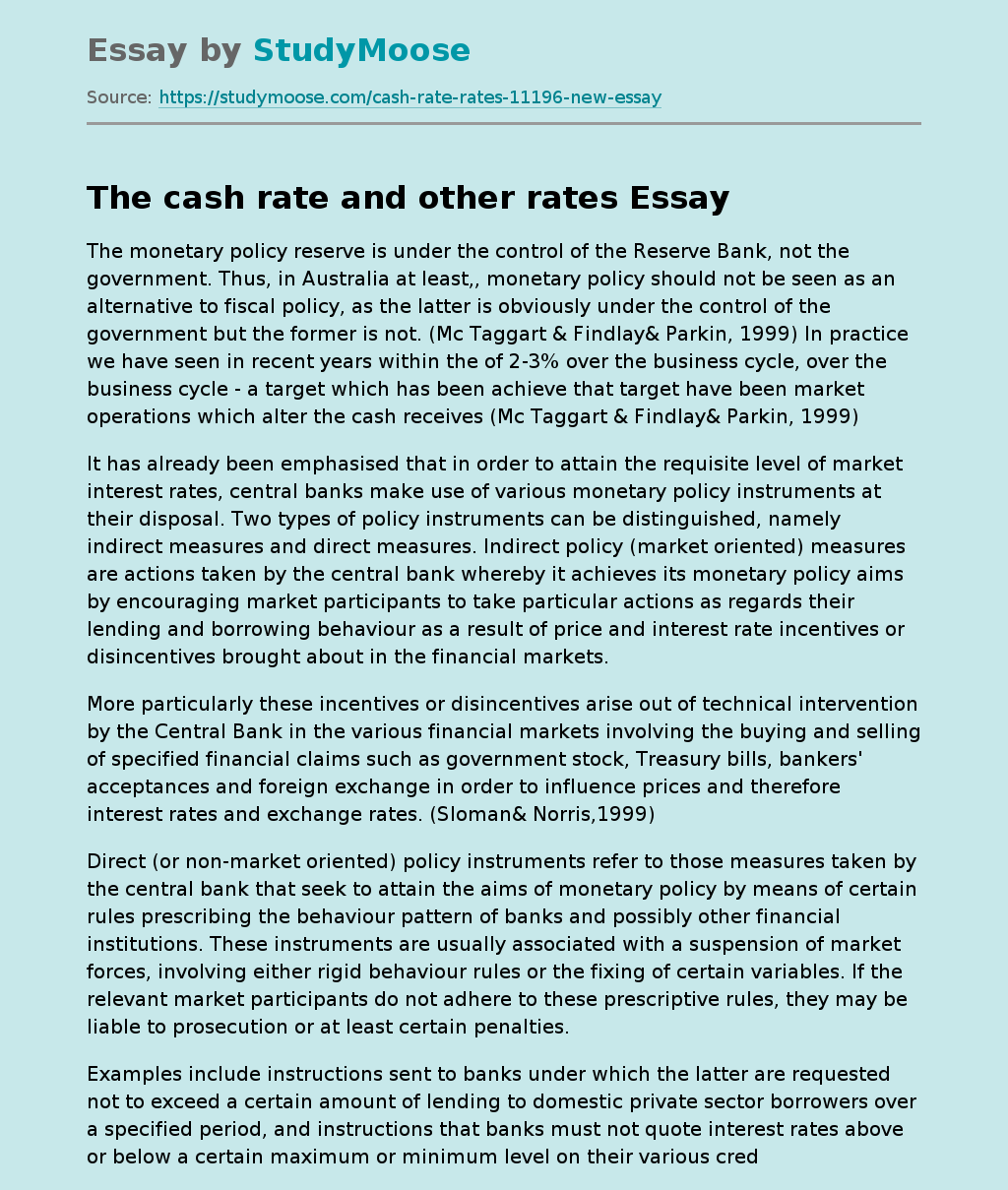