The Swatch Group had many early on successes due to repositioning strategies and a boost from acquisitions. On the surface, the Swatch Group was the world’s leading manufacturer of watches in the late 1990’s. They had 14 percent of the world market share and it appeared that gross sales and net profits were on the rise; however, under the covers, it was a much different story. Swatch was facing a myriad of issues that needed to be resolved in order for success to prevail.

Turn in your highest-quality paper
Get a qualified writer to help you with
“ Case Study: Swatch and the Global Watch Industry ”
Get high-quality paper
NEW! AI matching with writer

Management issues were plaguing Swatch; multiple key figures stepped down from the board in the mid 1990’s citing the CEO’s inability to listen to his staff. In addition to the management issues, Swatch was also facing fierce competition in many market spaces, including the largest consumer base space, the United States.

In addition to lack of market penetration in the United States, Swatch had too many products, which equally distracted buyers and sellers. Lastly, manufacturing costs continued to soar in Switzerland, the Swatch Group’s home base.

Other competitors were quickly cutting their costs by moving manufacturing overseas. The Swatch Group was at a crossroad; the strategy that had worked so well in the early 1990’s was no longer viable – the question now was what to do about it?

Although Swatch faced many issues, internal dissension can be the quickest death of a company. Hayek needs to ensure the people chosen to replace the board member’s who stepped down are able to handle his leadership style.

Equally as important as selecting a high-performing executive team, Hayek need’s to realize that traditional organizational principles of functional hierarchies will inevitably lead to rifts in management. This is a social issue that Hayek needs to address. If ex-board members continue to bad mouth Swatch it could have an impact on sales. To address this issue, Hayek needs to improve his leadership style and management model to actively involve his staff. As an employee, even an executive employee, being flat out told what you have to do all the time is often the ingredient for an unhealthy work environment, especially when trying to implement change. However, when employees are involved in making a decision it is often easier to put into action the decision that was made.

There is sometimes a higher acceptance of the decision when it comes from the ground up and there is a higher probability that the decision will be executed efficiently. The outcome of such a change will inevitably be positive. When Hayek has more then one person getting together trying to solve a problem, he will have an increased chance at a better solution then if he were trying to solve it himself. The employees bring a lot to the meeting room with them. For instance, they may have “inside information” about why production is faltering. By creating a high-performing executive team that works as a cohesive unit versus “he has to be the big boss alone, and can never share opinions” unit, the Swatch Group should begin to see an improvement in the softer issues, such as employee satisfaction, higher executive employee retention, and a more open communication model.

The Swatch group as a whole had an unparalleled ability to provide consumers with a wide range of products in all market segments. They could provide hi-tech watches that functioned as ski passes, fashion watches such as the Swatch, or an exquisite diamond studded precious metal watch – Swatch provided products at all extremes. However, certain product lines were more successful then others. The Swatch watch in particular was struggling to gain market share in the United States and elsewhere for several reasons including fickle consumer behavior and a product line that was daunting to consumers and resellers.

The Swatch product was quickly loosing its competitive edge against other players such as Fossil, Guess, Timex and Seiko. Resellers were dropping like flies and consumers felt like Swatch had saturated the market with too many products. Worse of all, consumer perception was that Swatch was a fad. Swift decisions need to be made to reverse this before the brand becomes part of a MTV or VH1 “I love the 90’s” television show. Luckily, most of the decisions to be made regarding product mix have very little impact socially and ethically.

Omega (part of the Swatch Group portfolio of brands), was facing a similar demise in the early 1990’s and successfully repositioned itself and became a major profit driver for the group. It achieved this by carefully selecting its marketing programs and drastically trimming its product line from 2,500 to 130. This strategy needs to be applied to Swatch, which focuses on the basic and middle-priced market. This is supported by the fact that the number of resellers dropped from 3,000 in the early 1990’s to 1,200 in 1998. Swatch needs to apply a SWOT analysis and determine which product lines are successful in this market space and drop the remaining products. In addition, the Swatch Group needs to look at their consumer base and determine if it would be profitable to launch a new product line that captures past consumers who have now progressed to the next stage of their lives and are desiring a more expensive and sophisticated watch.

A marketing campaign needs to be chosen that helps attract new consumers in the basic and middle price market focusing on the smaller number of brands and a separate campaign should be created that focuses on keeping their existing customer base. These campaigns should be replicated to other countries to ensure the Swatch brand remains visible. Neither of these resolutions will be easy to implement; however, if done successfully Swatch will decrease their production costs because there are fewer product lines and increase their sales based on marketing campaigns to two separate groups: new customers and existing customers.

Driven by high demand, offshore manufacturing centers are appearing throughout the world. Many of the Swatch Group’s competitors have switched their manufacturing to centers overseas and decreased their fixed costs, which resulted in an increase in profit.

The Swatch Group had always remained committed to its home base, partly because their home base possessed centuries of expertise in watch making and partly because a timepiece cannot be stamped with “Swiss Made” unless at least 50% of Swiss manufactured products by value are present in the timepiece. Although the mix of factors raising the possibility of outsourcing varies from company to company, there are a few themes that the Swatch Group needs to explore regarding the pressures to outsource. The Swatch Group needs to recognize that general concerns regarding cost and quality are the main drivers for outsourcing. In addition, outsourcing can turn a fixed cost into a variable cost, which will significantly help a company with varying volumes.

Although most businesses can benefit hugely through outsourcing or manufacturing in another country, the Swatch Group needs to determine if it will be successful and profitable for them. Outsourcing a portion of their value chain is not a quick-fix response to production costs or performance lags. Additionally, the choices for outsourcing locations are many, they are not all equal, differing in several critical areas. Selecting the right option requires balancing factors such as cultural affinity, geopolitical risk, cost, and resource availability.

To help narrow their focus in their analysis, initially, the Swatch Group should look to India for their outsource location. India has a large talent pool of skilled, experienced watch workers. These workers have hands-on experience supporting Titan industries. Titan is continuing to grow as a company and the pace of resource expansion is dramatically improving in keeping up with current as well as future technologies. Additionally, the Swatch Group should center their outsourcing attention to the assembly portion of the value added chain. This will ensure that 50% of the manufactured parts are still completed in Switzerland.

The design, marketing, and most of manufacturing of the watches still remain where the expertise is located. The assembly of a watch is an extremely repeatable and easily controllable task, which will increase the success for outsourcing. Outsourcing assembly to India will have many positive effects for the Swatch Group. Cost reduction remains the primary objective of outsourcing; the Swatch Group will have the ability to provide a good at a lower cost and should be able to make the assembly cost more predictable and controlled.

Ethically and socially, outsourcing has a caused many individuals and increase in job insecurity. Lower labor standards in other countries are forcing many companies to outsource much of their manufacturing. This is especially unsettling for individuals who lack the skills to make themselves difficult to replace, such as in manufacturing. If the Swatch Group decides to outsource assembly, there will be no easy way to redeploy the assembly workers. They can setup a redeployment pool for those resources and try to redeploy them elsewhere in the company. However, if this is not possible, a business decision will have to be made to lay those workers off. The utmost sensitivity will be required as it is possible that generations of families have worked for the Swatch Group. The Swatch Group will need to carefully balance the outsourcing cost reduction possibilities with the social ramifications that may exist.

There are many issues facing the Swatch Group and there is no right way to solve any of the issues. Each issue comes laden with ethical and social consequences that will also impact the company. The Swatch Group will need to take steps to ensure that international integration does not cause domestic social disintegration. Regardless of how the issues are resolve, the greatest challenge is going to be finding the right balance between markets and societies.

Swatch and the Global Watch Industry 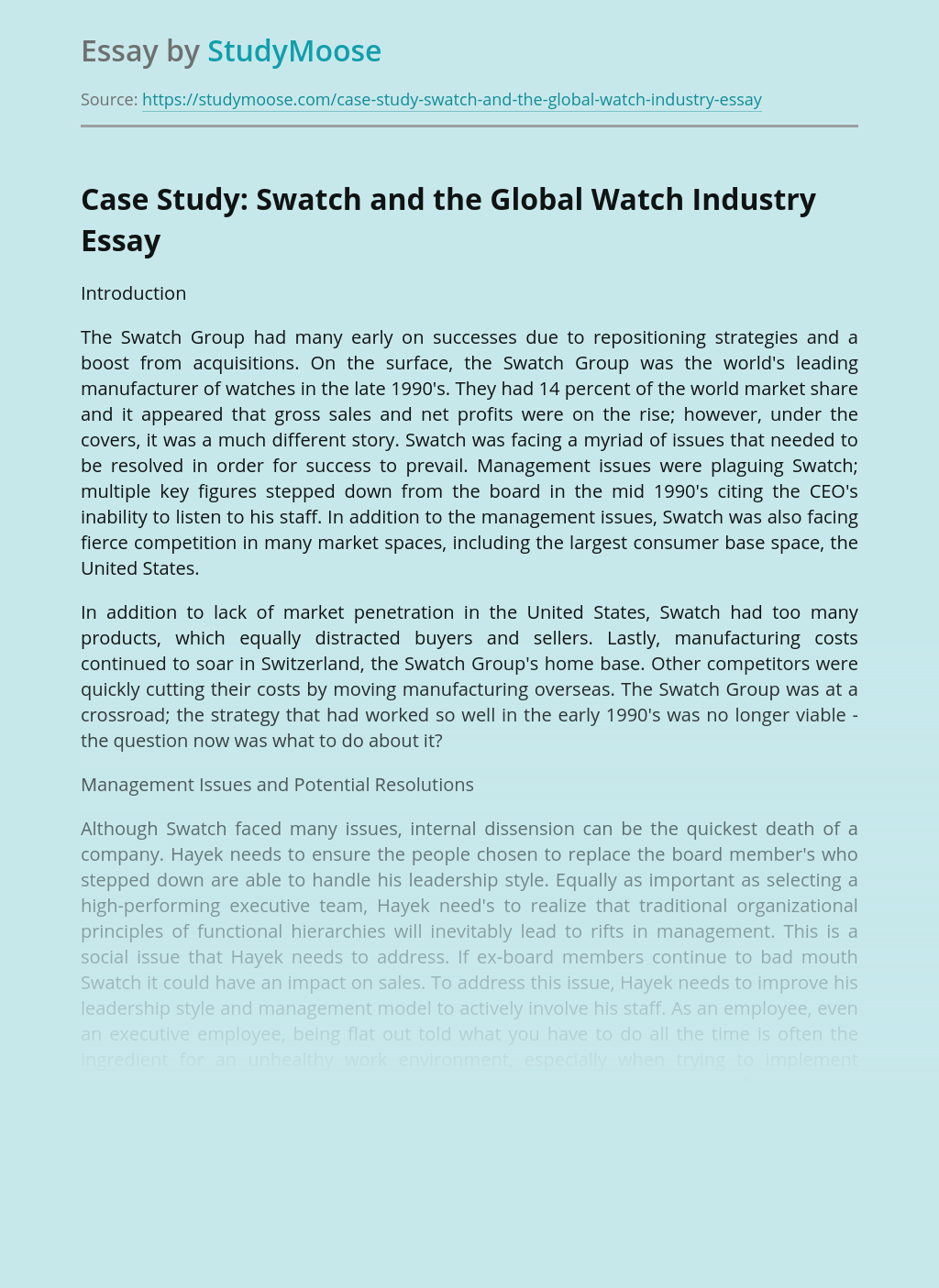 Turn in your highest-quality paper
Get a qualified writer to help you with
“ Case Study: Swatch and the Global Watch Industry ”
Get high-quality paper
Helping students since 2015
Stay Safe, Stay Original