There are many people that believe that using a helmet while riding a motorcycle will not help in most crashes. There is no data that supports this it is only a theory. Statistics have no way to predict what would have happened in the same accident under the same conditions if the person would have had a helmet or not. There is no guaranty of safety even with wearing a helmet while riding a motorcycle. If you are concerned with safety and comfort than riding in a car is an excellent way to go.

Turn in your highest-quality paper
Get a qualified writer to help you with
“ Cars vs. Motorcycles ”
Get high-quality paper
NEW! AI matching with writer

Cars have been evolving for thousands of years with safety, comfort and style in mind.

Given the information above alone makes riding in a car better than riding a motorcycle because a car is safer, quieter, and more comfortable than a motorcycle. Statistics show that 84 of drivers drive a car rather than a motorcycle. There are many features in cars that make them safe. Some of these features would be that they are made of metal.

The metal that the car is made of keeps individuals inside the vehicle safe from being hit directly in an accident. For instance, the Hummer is one the safest vehicles out there. It originated from the Hum-Vee which is used as a military vehicle.

The Hummer frame is the strongest in the car industry. A car has seatbelts that also keep you safe. When the seatbelt is buckled, it holds a person into the seat so that in the event of an accident the person is kept safe and inside the car.

A seatbelt has a three point safety-belt restraint system that focuses on the shoulders, hip and lap. This protects the bodys internal organs and controls the bodys forward motion during a crash. It also prevents cranial and cervical injuries by minimizing head and neck motion. For example, in Colorado of August 2013 there was a 7 year old boy that was killed in a crash off of highway 119.

He was in the cargo area of a 1996 Ford Explorer and was partially ejected during the rollover accident due to him not wearing his seatbelt. Another feature that cars have to keep you safe is the airbag. Airbags are passive restraints designed to activate automatically when a vehicle gets into an accident. For example, all new vehicles in the United States have to include dual front airbags, but many automakers go above and beyond that minimum requirement such as Toyota. In addition to the car being safe, it is also quiet. What makes a car quiet is that it has doors. A vehicle door can be opened to provide access to the opening, or closed to secure it.

These doors can be opened manually, or powered electronically. Doors when shut keep out noise and weather conditions such as wind, rain and heat. In addition, the Cadillac has won the Motor Trends Car of the Year for the last five years due to the exterior design of their doors. The suction that the Cadillac doors provide keeps out 98 of all noise and air, as well as 100 of all weather conditions. Windows also help keep a car quiet. Car windows have a seal that keeps out wind and noise from the outside when rolled up. When rolled down the windows allow air to flow throughout the vehicle.

For example, my daughter and I were taking a trip to Pismo, and we had the windows down to enjoy the breeze, but the wind was so loud we couldnt hear each other and had to roll them up. It was so quiet and peaceful after rolling up the windows. A car is also comfortable along with being safe and quiet. Cars have seats with backs as well as temperature control. The back of the seats in a vehicle can lean back keeping it comfortable and making it an enjoyable ride. Vehicles also have a system to blow heat or air conditioning into the car to keep the individuals inside the car comfortable. For instance, the BMW has very comfortable seats.

If leaned back it feels like a recliner chair. The air control in the BMW has several settings to keep the driver and passengers comfortable. Riding in a car is safe, quiet and comfortable, unlike riding on a motorcycle. For instance, riding a motorcycle is more dangerous than a car because motorcycles are hard to see on the road and are easily hit. Due to the size of motorcycles there is more of a blind spot than that of a car that makes it easy for them to be hit by other drivers on the road. For example, there is a lady and her husband just last week that were going on a ride to Bass Lake on their motorcycle.

They were in their lane on the freeway, and a car didnt see them because they were in the cars blind spot, and they were hit. Tanya suffered from a fractured shoulder and Justin needed surgery for his broken back. Banning motorcycles would cut the accidents on the road by half of what they are now. Motorcycles are also dangerous because riders can easily fall off. Motorcycles only have two wheels, one in the front and one in the back. There is nothing to hold the rider onto the bike. For instance, 64 of all motorcycle accidents are due to the rider falling off their 1 / 2 bikes. Riders tend to not hold onto the bike as well as they should.

If motorcycles were banned the cost of vehicle insurance and medical expenses would decrease considerably. Not only is a motorcycle more dangerous than a car, it is quieter too. Unlike the car that is quiet inside because of the doors and windows, a motorcycle is loud because there is no barrier to outside wind. While riding the wind blowing against the rider is very loud. For example, in 1972 there were 14,000 cases of riders having ear infections and hearing loss due to the wind blowing in their ears while riding. The amount of people with hearing issues would go from 74 to 30 if we did not have individuals riding on motorcycles.

A car has comfortable options whereas riding a motorcycle is very uncomfortable. When you are riding a bike, and you go over bumps it hurts. Motorcycles are designed with only a little cushion for the rider to straddle so that they do not become too comfortable and lose focus. When going over bumps in the road the rider feels it in-between their legs. For example, a biker, James Casotle quit riding motorcycles in 1997 for this reason alone. He was so uncomfortable and in pain after getting off his motorcycle he would have a hard time walking.

Years of this caused him to have permanent damage to his tailbone. Not only do the bumps in the road cause discomfort so do insects. While riding motorcycles, insects flying around can fly into the riders mouth or eyes. For instance, there is motorcycle insurance commercial, and it shows a rider on the highway. As the guy is riding a swarm of insects fly into him. The bugs fly into his mouth and eyes causing him to crash. Banning motorcycles would result in fewer accidents and medical issues.

If motorcycles were banned from the United States, we would have a decrease in taxes since there would not be such a high demand for certain medical issues. We would have safer roads since driving a motorcycle is dangerous for those driving cars and the motorcyclist. There are billboards reminding drivers to check twice for motorcycles, but they are still difficult to see and some drive between vehicles. If motorcycles did not exist, it would cut down on accident and deaths greatly.

Cars vs. Motorcycles. (2017, May 28). Retrieved from https://studymoose.com/cars-vs-motorcycles-essay 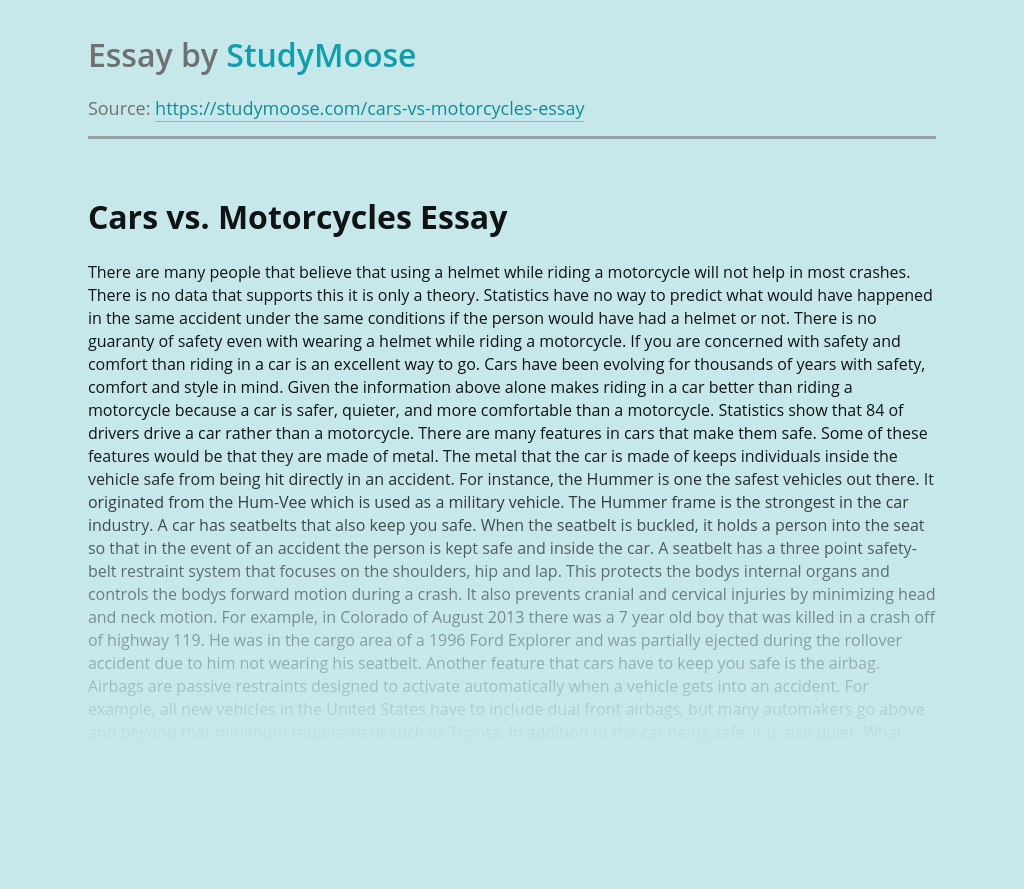 Turn in your highest-quality paper
Get a qualified writer to help you with
“ Cars vs. Motorcycles ”
Get high-quality paper
Helping students since 2015
Stay Safe, Stay Original