More than 18 years ago, in June 1988 President Corazon Aquino signed the Comprehensive Agrarian Reform Law and thus laid the foundation for the implementation of the Comprehensive Agrarian Reform Program. The law was passed after nearly a year of heated discussions in Congress. It was passed after the killing of 19 peasants who were members of a demonstration of 15 000 peasants asking for a meeting with the President and under the subsequent pressure of a coalition of 13 major farmers’ organizations who had formed a powerful umbrella group, the Congress for a People’s Agrarian Reform, consisting of one and a half million members.

Don't use plagiarized sources. Get your custom essay on
“ Carp and Carper Law ”
Get custom paper
NEW! smart matching with writer

The implementation of the reform did not go smoothly and met, as in other countries implementing an agrarian reform, strong resistance from large landowners. Some used their political influence to prevent confiscation, while others tried to circumvent the reform by illegal land transfers, land use conversion and other illegal means. Furthermore, the landlord dominated Congress delayed persistently the allocation of funds for the implementation of the program.

Yet, despite many obstacles the Department of Agrarian Reform (DAR) and its cooperating agencies have accomplished many of their objectives. Some 2 million landless farmers have received a plot of land of their own and about 1 million tenants were given secure tenancy conditions. The reform has improved the wellbeing of the rural society and contributed to socio-economic stability in the countryside. With a coverage of about 40 percent of the rural population and 75 percent of all cultivable land the reform can be considered as one of the most successful in recent times.

While some large latifundia are still to be covered, the time has come to reflect about the future role of the Department and its staff once the land acquisition and distribution component of the reform has been completed, i. e. in the post land acquisition and distribution (post LAD) period. As the experience in the Philippines and in other countries has shown the mere allocation of land to reform beneficiaries is not sufficient. In order to become successful they have to be provided with supporting services.

In the past they were, to a large extent, supplied by the Department of Agrarian Reform. However, if a main part of its activities comes to an end, the question arises whether there is still need for DAR and if so, for which tasks, or whether other actors are better suited to carry out the remaining activities. In this state of affairs the Department became aware of the need for a study which would review various institutional options for supporting reform beneficiaries and the rural community as a whole.

The Department approached the German Technical Cooperation (GTZ) to assist in the preparation of such a study. GTZ has, for more than 30 years, cooperated with the Government of the Philippines in implementing its development programs. It has given special emphasis to economic reforms and poverty alleviation. In recognition of the importance of maintaining the gains of the reform for the alleviation of rural poverty GTZ responded favourably to the request. In consultation with the Director of the Policy and Strategic Research Service, Mrs.

Martha Carmel Salcedo, GTZ commissioned five agrarian reform specialists and a project manager to conduct the study. A steering committee composed of DAR and GTZ was responsible for the coordination of the study. The consultants prepared an analysis of the various components of the program and made proposals for agricultural and rural development in a period after land acquisition and distribution. In order to validate their preliminary findings and conclusions GTZ organized regional consultations in Davao, Cebu, Zamboanga, Baguio and San Fernando and a national workshop in Metro Manila.

The meetings provided an open forum for discussions among representatives of government and civil society about the future of CARP, DAR and its cooperating agencies. The views expressed in these meetings were considered by the consultants and as far as feasible incorporated in the study. Director Salcedo and her staff followed the various stages of report preparation and offered valuable comments on earlier drafts, without, however, interfering in the conceptual work of the consultants.

In order to provide necessary background information which is needed for the understanding and justification of the various options proposed, the book traces in its first part the events that characterized the implementation of the program and describes in several sub-chapters its main components. It appraises program accomplishments and impact. It analyses shortcomings and constraints in its implementation. Each sub-chapter pinpoints lessons learned and identifies components which require further interventions.

In the second part of the book the consultants provide several options for institutional change for the future development of the rural community and give special emphasis to the role of the Department of Agrarian Reform and its specialized units. On the basis of their analysis in the first part of the study they propose a number of recommendations which the government may consider in order to safeguard the achievements of the reform.

In this context it is proposed that full use should be made of the experience of the able and motivated staff of DAR, both in the field and in headquarters. On the other hand it is important to realize that agrarian reform and rural development cannot be achieved by government interventions alone. While the government can provide the general legal framework, sustainable rural development requires the active participation of local level self-help groups, autonomous peasant organizations and NGOs. 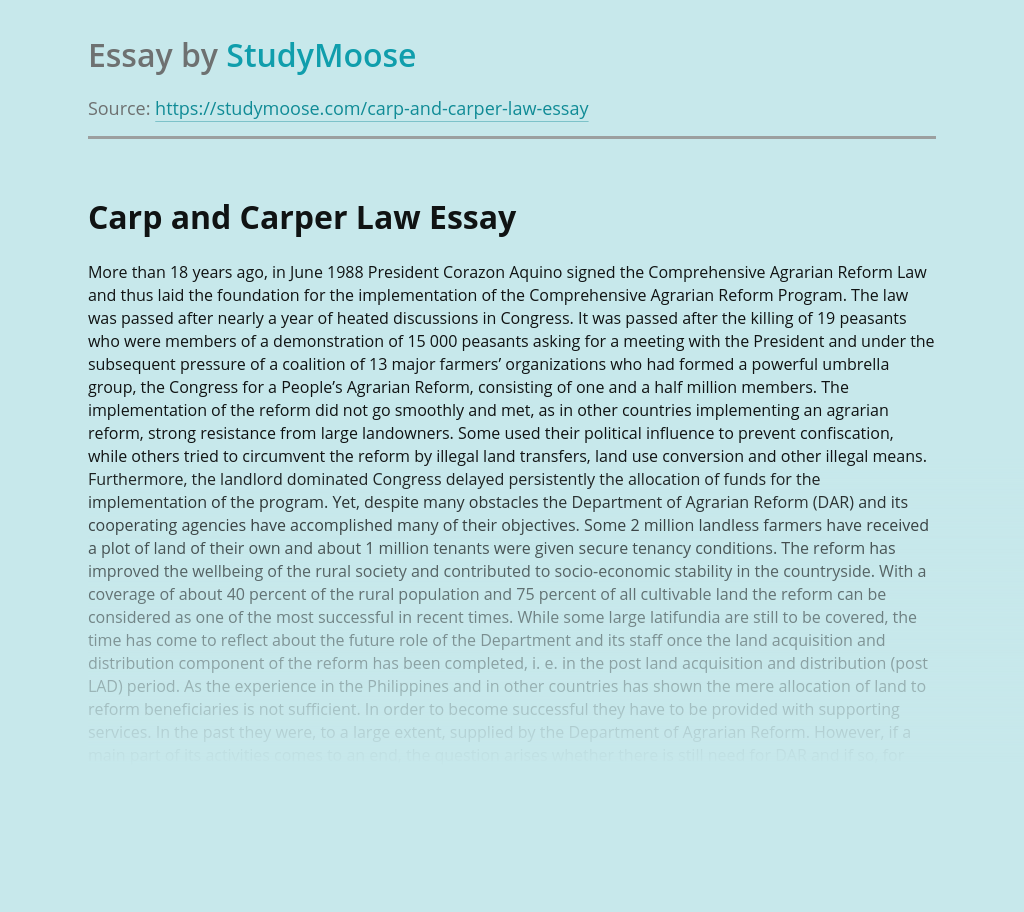