A camera shot is the amount of space that is seen in one shot or frame. Camera shots are used to demonstrate different aspects of a film’s setting, characters and themes. As a result, camera shots are very important in shaping meaning in a film. Reviewing the examples on the right hand side of this page should make the different camera shots clearer. An extreme long shot (animation on right) contains a large amount of landscape. It is often used at the beginning of a scene or a film to establish general location(setting).

Don't use plagiarized sources. Get your custom essay on
“ Camera shots english ”
Get custom paper
NEW! smart matching with writer

This is also known as an establishing shot.

A long shot (animation on right) contains landscape but gives the viewer a more specific idea of setting. A long shot may show the viewers the building where the action will take place. A full shot (animation on right) contains a complete view of the characters. From this shot, viewers can take in the costumes of characters and may also help to demonstrate the relationships between characters.

For more information on costumes and acting refer to Chapter 4. A mid shot (animation on right) contains the characters or a character from the waist up.

From this shot, viewers can see the characters’ faces more clearly as well as their interaction with other characters. This is also known as a social shot A close-up (animation on right) contains just one character’s face. This enables viewers to understand the actor’s emotions and also allows them to feel empathy for the character.

This is also known as a personal shot. An extreme close-up (animation on right) contains one part of a character’s faceor other object. This technique is quite common in horror films, particularly the example above.

Camera angles are used to position the viewer so that they can understand the relationships between the characters. These are very important for shaping meaning in film as well as in other visual texts. The following examples will help you to understand the differences between the different camera angles A bird’s eye angle (animation on right) is an angle that looks directly down upon a scene. This angle is often used as an establishing angle, along with an extreme long shot, to establish setting. A high angle (animation on right) is a camera angle that looks down upon a subject.

A character shot with a high angle will look vulnerable or small. These angles are often used to demonstrate to the audience a perspective of a particular character. The example above demonstrates to us the perspective or point of view of a vampire. As a viewer we can understand that the vampire feels powerful. An eye-level angle (animation on right) puts the audience on an equal footing with the character/s. This is the most commonly used angle in most films as it allows the viewers to feel comfortable with the characters. A low angle (animation on right) is a camera angle that looks up at a character.

This is the opposite of a high angle and makes a character look more powerful. This can make the audience feel vulnerable and small by looking up at the character. This can help the responder feel empathy if they are viewing the frame from another character’s point of view. As with camera shots, you will be able to see many examples of camera angles in any film or visual text that you view. The next time that you watch television or see a film, take note of the camera angles and think of how they affect your perception (idea) of different characters. Another camera angle that you might come across is a Dutch angle.

A tracking shot moves on tracks and a dolly shot is mounted on a trolley to achieve the effect in the example above. This camera movement is used in a number of ways but is most commonly used to explore a room such as a restaurant. By using a tracking shot or a dolly shot the composer of a film gives the viewer a detailed tour of a situation. It can also be used to follow a character. Panning (animation on right) is used to give the viewer a panoramic view of a set or setting. This can be used to establish a scene Others An Evangelion shot (animation on right) is derived from the popular anime series ‘Neon Genesis Evangelion’.

This camera movement begins as an extreme close-up and zooms out abruptly, creating a blurring effect to emphasise the speed and size of the object Lighting Lighting is a very important aspect for shaping meaning in films. What kind of atmosphere is created in a room lit by candles? Have you ever heard of mood lighting? A room that is brightly lit by neon lights might seem to be sterile or a shadowy room might be eerie or scary. The lighting technicians in a film crew have the task of creating lighting to suit the mood and atmosphere of each scene in a film.

Cinematography is the combination of the techniques described in this chapter. This includes camera shots, camera angles, camera movement and lighting. Use the term cinematography to group all of these together, for example, ‘The cinematography in that film was exceptional. ‘ Mise en Scene Mise en scene refers to all the objects and characters in a particular frame. More specifically, it refers to the composition of the frame. When you use the term mise en scene, you are discussing where the composer or director has placed all the elements of the scene within the frame. 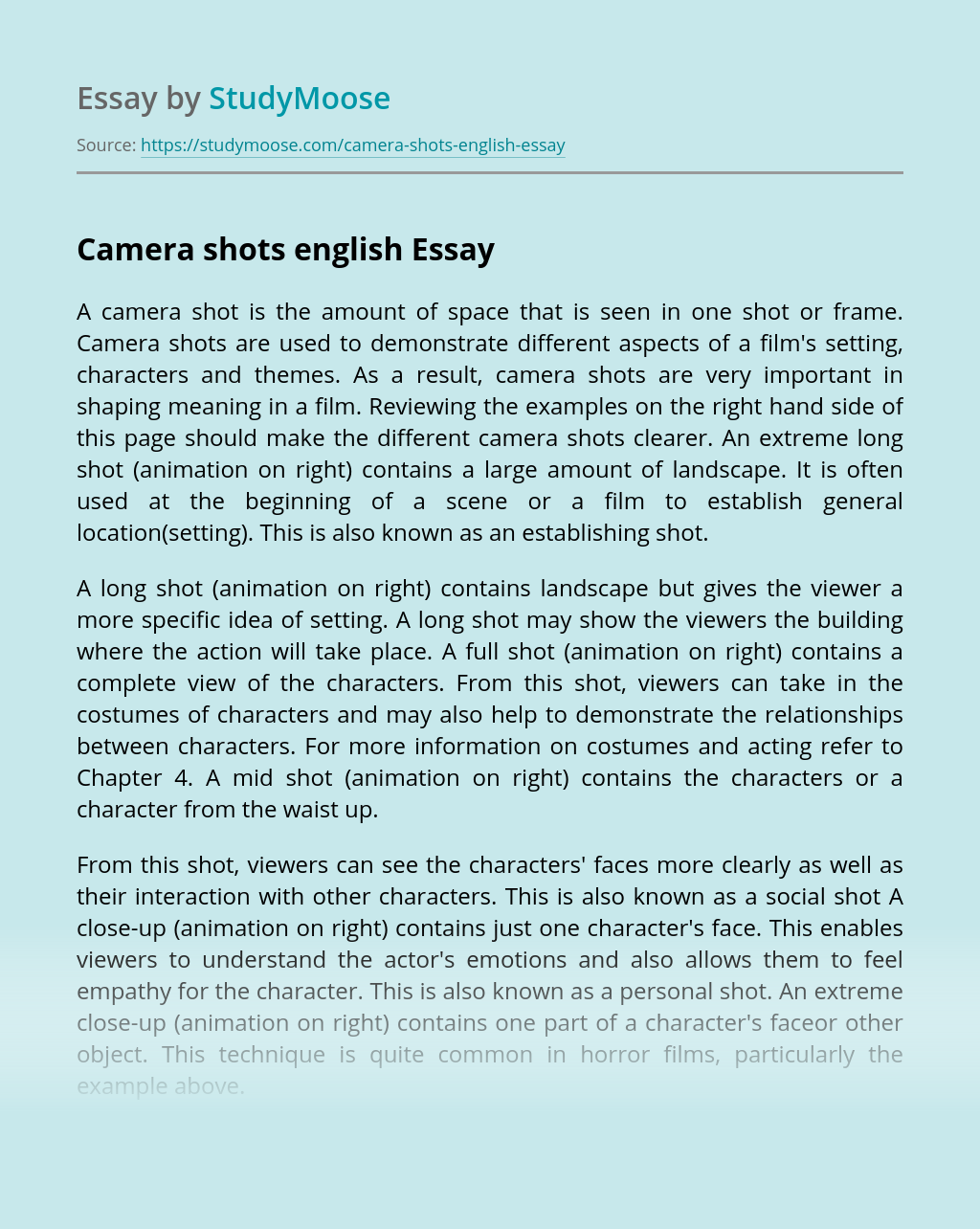