Caliban as a Sympathetic Character

In the play “The Tempest”, Shakespeare introduces us to several different characters, each identified individually with their contrasting attitudes, nature and prior circumstances that have brought them to a deserted isle in the heart of the Mediterranean Sea. Shakespeare creates characters that exemplify the relationship between human nature and contemporary civilization and the distinction between men and monsters.

The character of Caliban is known to its complexity and numerous aspects, depths and sides to it. Caliban, the only native of the island is a vulgar, malice slave that is often referred to a beast.

Don't use plagiarized sources. Get your custom essay on
“ Caliban as a Sympathetic Character ”
Get custom paper
NEW! smart matching with writer

He is the son of the witch Sycorax and his Father is unknown, hence associated with the devil and he was said to be “littered” on the island, a word generally used to describe the birth of animals. Shakespeare describes Caliban as a pure product of nature, of whom he is uncontrolled, wild, savage, innocent and uncorrupted by the influence of civilization. He is uneducated, untrained and uncivilized, a creature of the earth, being almost literally dug out of the ground.

Caliban used to own the island, however, was naïve enough to allow a foreigner (Prospero) to enter his most valued occupation and abduct it from him. Caliban and Prospero appear to have had an affectionate relationship, through Prospero educating him and offering him a shelter in his own cave, an intimate favor demonstrating compassion and abundant generosity as well as Caliban showing him all the parts of the island. Caliban takes Prospero’s affection for granted and underestimates Prospero’s power and magic, accordingly acts in an aggressive manner in an attempt to rape Miranda.

This causes the reader to be repulsed by his disgusting behavior, almost sensing animosity that Caliban does not display the minimal appreciation of Prospero’s considerable kindness. At this point, the reader can easily understand why Prospero treats him so poorly, and almost feel as if he deserves to be treated in such way, that he was not accounted and aware of the consequences that accompany such action and therefore had brought his situation upon himself. Consequently, the question remains, if Caliban had controlled his impulses, and held back his barbarous instincts, would he really had found himself in a better- off situation, or is being mistreated a part of his nature and fate?

Caliban as a Sympathetic Character. (2016, Sep 28). Retrieved from https://studymoose.com/caliban-as-a-sympathetic-character-essay 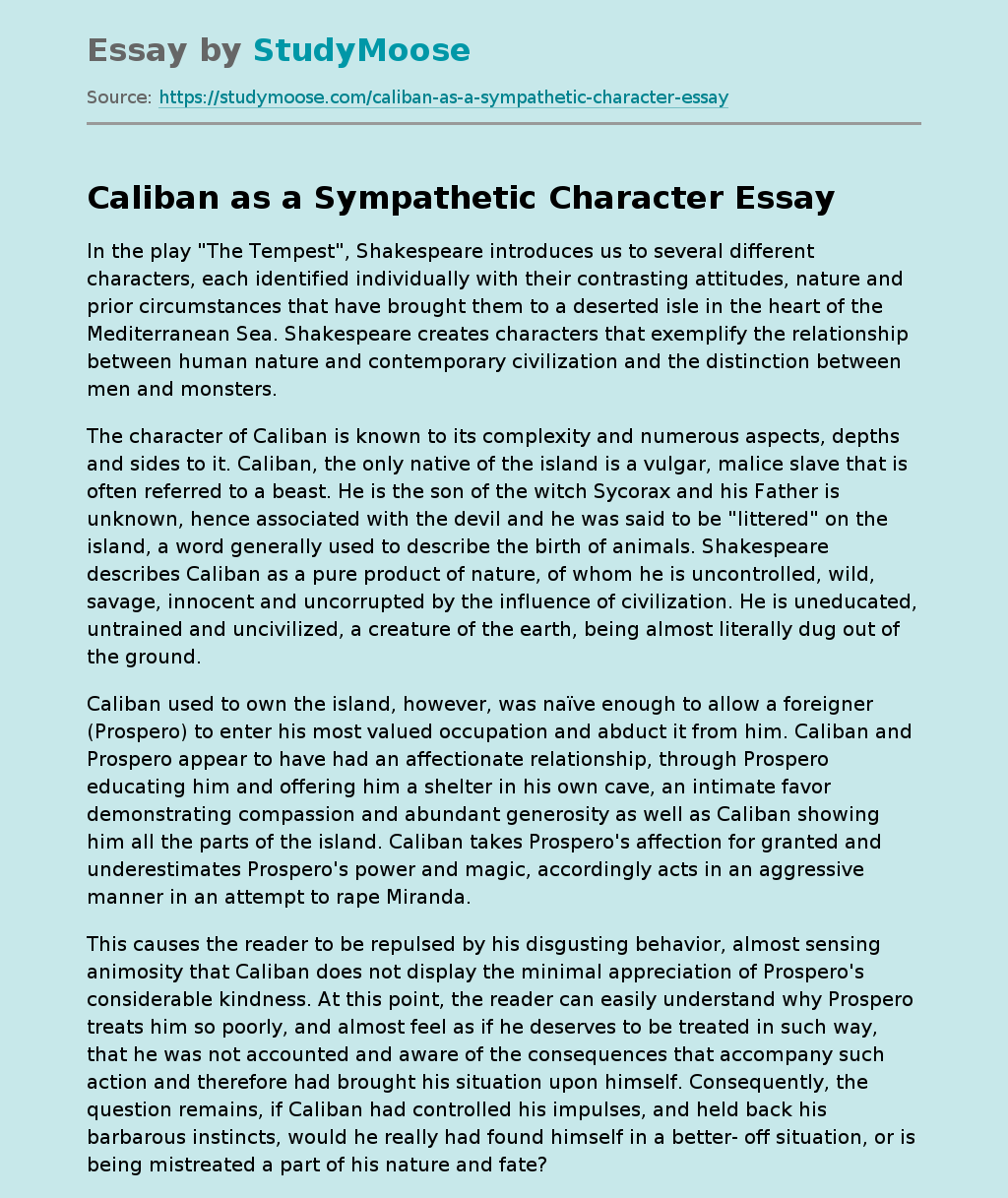